Can auto-hide for the application menu be turned off in Unity?

Will there be a way to disable auto-hide behavior of global application menu in Unity. While I would prefer to have this behavior disabled by default (as it is bad UX), it looks like it's here to stay, so I'm wondering if, as a user, I will be able to turn it off.

In addition to the gsettings menu option introduced in 15.04, this has been added to Settings - Appearance: 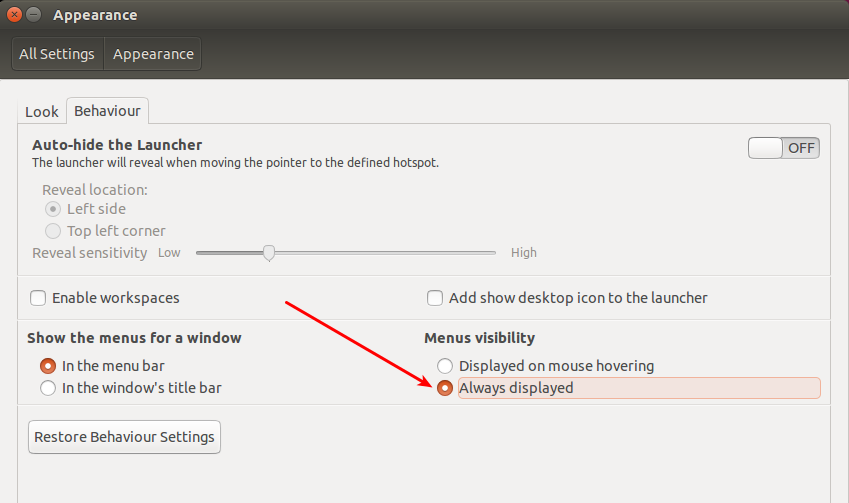 15.04 now has the ability to toggle the global menu as well as the local integrated menus (Via System Settings - Appearance - Behaviour tab) to be permanently on or off.

If you are running a fully up-to-date version of 14.04, this same ability has been backported.

To switch on permanently:

To switch off i.e. to autohide:

The global menu cannot be prevented from autohiding using the standard Unity install.

... you can also delay the autohiding of the global menu for up-to 10 seconds

This solution involves adding a custom version of Unity to your installation. Thus - you are dependent on the PPA maintainer for future Unity releases etc. Whether this dog eats your cat - I'll leave for you to monitor the ubuntuforums thread. I will not vouch for its veracity or stability.

Now it's possible. The Unity Revamped PPA which provides Unity with two patches: Dodge Windows and minimize/unmaximize on click for the Unity launcher, has been updated yesterday with some fixes which aren't yet available for the Unity package from the official Ubuntu 12.04 repositories as well as a new patch that brings a much requested feature: an option to disable the application menu (global menu) autohide behaviour.

The option that lets you disable menu autohide in Unity was supposed to be included by default in System Settings for Ubuntu 12.04, but it didn't make it for some reason. Hopefully, this option will make it into Ubuntu 12.10 by default, but until then, you can use the PPA below to get an option to disable the application menu autohide behaviour.:

To upgrade to the latest patched Unity from the Unity Revamped PPA in Ubuntu 12.04 Precise Pangolin, use the following commands:

To get the menu to always be visible, you'll need to install CompizConfig Settings Manager: 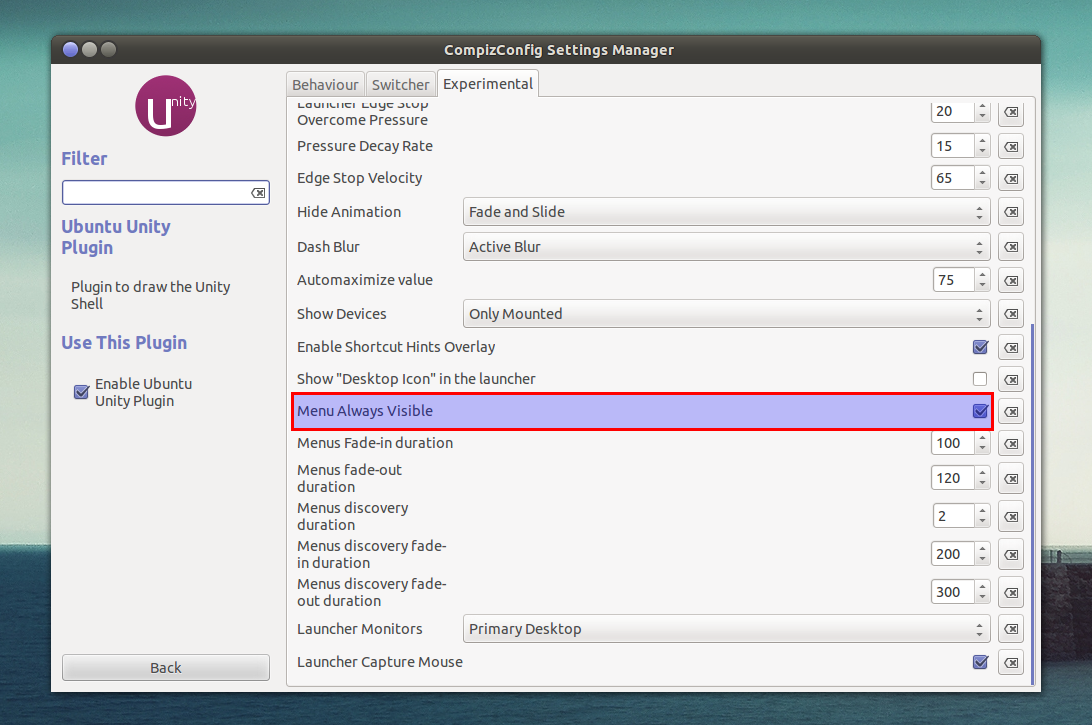 Then open CompizConfig Settings Manager (CCSM), select "Ubuntu Unity Plugin" and on the "Experimental" tab, check the box next to "Menu Always Visible" (it's not checked by default).

The is suggested in the following bug. As a user you can vote for it.

Menus are hidden by default

Not the answer you're looking for? Browse other questions tagged unity panel appmenu menu-bar autohide or ask your own question.

1
How do I modify the Unity Global Menu
9
Can global application menu be made to behave better with GIMP?