How do I enable hardware virtualization technology (VT-x) for use in Virtualbox?

So I am trying to run Ubuntu in a virtualbox but on installing 12.10 from the .iso I was greeted by a warning telling me that audio wouldn't work then I pressed next and this popped up:

And then it doesn't work.

Downloaded 12.04.2 on my PC and tried again. Still getting the same message.

Before changing BIOS settings we may want to see if hardware virtualization (VT-x for Intel, AMD-V for AMD processors) is supported by our CPU.

From a terminal issue

If virtualization was supported the flag vmx (for Intel CPUs) or svm (for AMD CPUs) will be colored.

In case the CPU supports hardware virtualization, we need to enable it in the computer BIOS to be able to use it.

Also read How to determine if CPU VT extensions are enabled in bios? for other approaches.

Enter the BIOS (often pressing Del or F12 while booting) and see with the manual how it is named there. Each BIOS appears to have a different name fror this. Search for Virtualization, Virtualization Technology (VT-x), SVM, VMX, or similar, here shown for an Award BIOS: 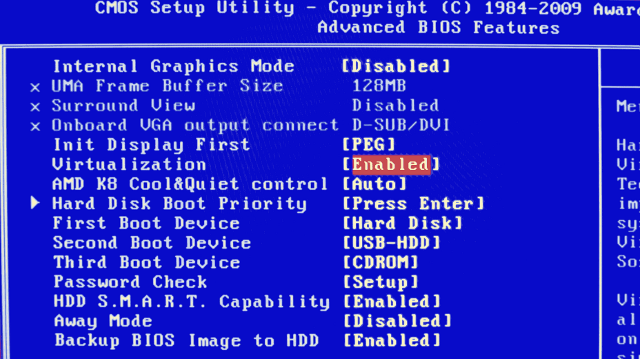 For an example screenshot of an Asus EFI-BIOS see this answer on SU.

Set this entry to Enabled in case it was not done yet. Some BIOS need a cold boot (i.e. boot from power off state) to be able to use hardware virtualization.

Hardware virtualization can then be chosen in the virtual machine's System -> Acceleration settings:

By this the VM uses hardware virtualization for optimal performance. We would even be able to run a 64-bit guest OS on a 32-bit host for testing.

Not the answer you're looking for? Browse other questions tagged system-installation virtualbox virtualization or ask your own question.

5
I can't open any virtual machine on VirtualBox
4
Virtual Box Kernel error
1
How to enable virtualization on booting? (Ubuntu 13.10)
0
New OS running on VirtualBox does not run
0
VT-x/AMD-V hardware acceleration is not available on your system
2
How to Enable AMD-V virtualization on Lenovo G585
1
'VT-x/AMD-V not operational' error running Ubuntu 13.04 GNOME 64-bit on VB
0
error while installing windows 7 through virtual box
0
Error Installling an OS in Virtual Box in Ubuntu
0
Hardware acceleration error when starting Ubuntu 14.04 in VM
See more linked questions