How can I place Gedit's tab close buttons on the left?

I would like to make Gedit fit more to the Ubuntu default themes Ambiance and Radiance. Therefore I would like to place the tab close buttons on the left instead of the right of each tab.

I asked a similar question about Firefox, but the best answer was adding an extension. So what can I do for Gedit ?

Besides, I bet I will shortly ask equivalent questions for Nautilus, etc.

During the Ayatana discussion in this bug report, tab placement inconsistency in the design was mentioned 115 times, in over 20 separate posts, throughout the near-800 comments, but the final decision was still to move window buttons to the left.

If you desire consistency, you're far better moving the window buttons back to the right using one of the many methods described in that bug report. For example, use gconftool-2 --set /apps/metacity/general/button_layout --type string ":minimize,maximize,close" or add the PPA outlined in comment 792.

However, you've already fixed Firefox with a plug-in, and hopefully someone can help you hack Gedit. That leaves the list of "to-do", for me personally, at :

Bottom line, re-designing all these apps will take time. I doubt the work will be complete for Natty, but perhaps we'll start to see some consistency by Natty+1.

I realise that this "answer" isn't going to help you. I raise it simply to make you aware of the scope of the task you've undertaken here.

Ubuntu Tweak can handle the position of the titlebar buttons. Nevertheless, the close icon for the tabs in gedit seems not to be affected directly by the changes made by the window titlebar buttons layout.

However, Here I place a screenshot for you to find a tip on how to change the orientation of these buttons in all the applications (including firefox, nautilus, etc.)

Good luck in your quest!

Here is the screenshot: 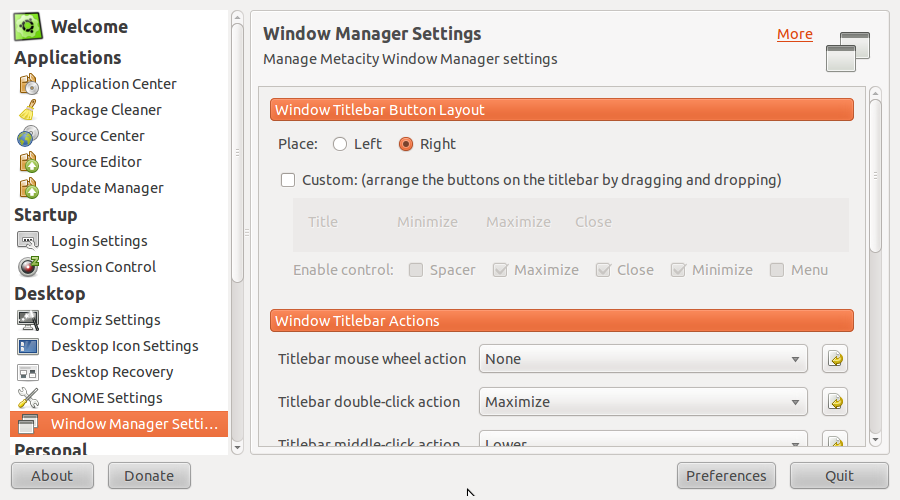 Not the answer you're looking for? Browse other questions tagged gedit window-buttons tabs or ask your own question.

4
How do I force Chromium's window buttons to the right side when in GNOME?
4
How can place Firefox’s tab close buttons on the left?

11
How to put the windows close button on the right?
7
How to have the “close”, “maximize” and “minimize” buttons on the left in google-chrome in kde
1
Gnome Shell close, etc. buttons look
26
How do I move to a new tab in gedit using the keyboard?
10
How can I move the Exit, Maximize, Minimize buttons to the left in Kubuntu?
13
How come all my window buttons are right aligned, but chrome buttons are on the left?
1
Can I shrink gedit's side panel?
4
Always show close, minimize, maxmize buttons