Dual boot. How do I reinstall the Ubuntu partition?

I just got a new netbook and I'm setting up operating system configuration. It came with windows 7 starter but I installed dual boot Ubuntu 12.10. I've been writing on some forums and now I don't want things from previous searches and stuff popping up in public so I'm considering a disc wipe and reinstallation of Ubuntu.

Ubuntu was installed by downloading an iso from inside Windows, then put on an usb drive and rebooted and installed alongside windows. I did not do any fancy configuration about swap spaces or partitions. When I start, I get to choose if I want to boot up as Windows or Ubuntu. It automatically chooses Ubuntu. Also, I would like to change this so that it chooses Windows by default.

I'm not interested in a wiping of free disc space or any goverment-level confidentiality. I just want my Ubuntu partition cleared, from occasionaly peeping curious eyes, not having previously visited websites or previously written documents popping up accidentally. If I remove Ubuntu from my hard drive, and then install it again, will a lot of the stuff still be there? I really would like not to format my hard drive because I have stuff on the windows part of the system that I use.

Reinstalling Ubuntu has nothing to do with Windows 7. Just make the bootable USB again and reinstall Ubuntu on the same partition as before. If you choose to format the partition everything, including all files (under home) and settings and also installed application will be lost.

But I think it’s not necessory to reinstall Ubuntu in your situation. You can delete your history:

For deleting Firefox history, go to Edit -> Preferences -> Privacy and click on clear your recent history and you can choose Never remember the history. (Also you can use Private Browsing to temporarily prevent Firefox from keeping your browsing history. 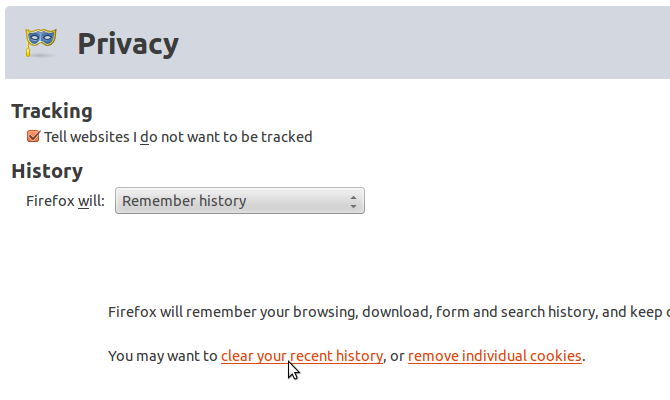 For deleting files history in dash, simply go to System Settings -> Privacy and delete all histoty. You may also want to turn off record activity at the bottom.

The short answer is Yes, you can re-install Ubuntu without having to re-install Windows 7. You might be able to apply this answerto your situation:

How to install Ubuntu, remove Mint and set up a separate home partition?

You should be able to follow the same steps, but ignore the last part about the separate /home partition.

Its far easy to have a reinstall, ubuntu ,it would take only 10-15 minutes ,if you completly want to reset ,then it is good idea to keep no straces behind .Also ,there is nothing to do with windows 7 partition unless & untill you mess with it.just install on same partition.

Not the answer you're looking for? Browse other questions tagged dual-boot system-installation privacy or ask your own question.

0
Accidentally deleted Ubuntu installation, how can I reinstall it cleanly on a dual boot system?
3
How to install Ubuntu, remove Mint and set up a separate home partition?