/sda1 and /sda2 have been deleted and /sda2 expanded into /sda1.

How do I edit both /etc/fstab and GRUB2 to have proper (I have no idea how to use words to express this idea) UUID? I know that using GParted to "copy" /sda3 to /sda1 requires editing to make the copied partition have a UUID that is not a match (or the same UUID number as) the original partition (/sda3). What other steps must I take to not confuse GRUB2 and the fstab so that they work harmoniously and I don't harm the OS/data/other stuff on the hard drive?

I cannot post a screenshot of gparted, so here is fdisk -l in stead:

The easy way, IMO, is to boot the Ubuntu desktop CD. You can then use gparted to copy-paste your partitions.

The only trick with gparted is that you have to apply the changes one setp at a time. 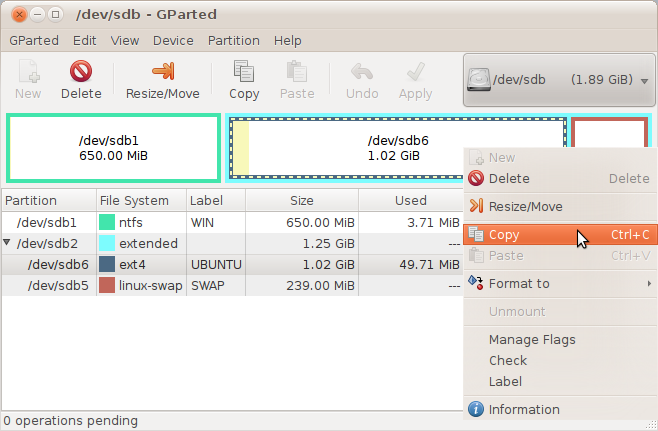 Mount the partition at /mnt

Edit fstab, enter the new UUID under the entry for the root file system.

Is there a specific reason why you want to move the Linux partition from 3 to 1? Do you aim for a performance gain or is it just out of habit?

Pro: Linux partition is physically in first place, no need to reinstall bootloader

Con: sda3 is still sda3 and what has been sda2 could be sda1, be careful not to write to the wrong partition with dd, dumping takes more time as it copies everything (even files and fragments of files that do no longer exist)

Go the easy way. If performance matters buy a SSD. (I know that this is the most overused phrase these days, but measurably worth the effort.)

Not the answer you're looking for? Browse other questions tagged gparted uuid partitioning or ask your own question.

3
File system is not clean (The partition is misaligned by 1024 bytes)
1
unable to dualboot win XP with Ubuntu 13.04 on Asus Zenbook UX32a
1
Splitting one partition into three
0
The volume boot has only 40mb disk space remaining
2
Can't write to flash drive unless root