How do I change my default shell?

Terminator will always start the shell specified by the SHELL environment variable. (It will fall back to /bin/sh if the SHELL environment variable isn't set.) You could simply influence Terminator's environment, but the best solution is to tell your operating system which shell you'd like, and it will ensure that SHELL is set correctly for all applications, not just Terminator. See the documentation for your operating system for details on how to change your default shell.

So I expected my attempts to work, but they don't. How can I change the default shell in Terminator.

Use `chsh` to change shell

You can use chsh to change your default shell. Running this command will ask for complete path of the shell.

You can also run

to change the shell directly.

You can also change the Terminator preferences directly. 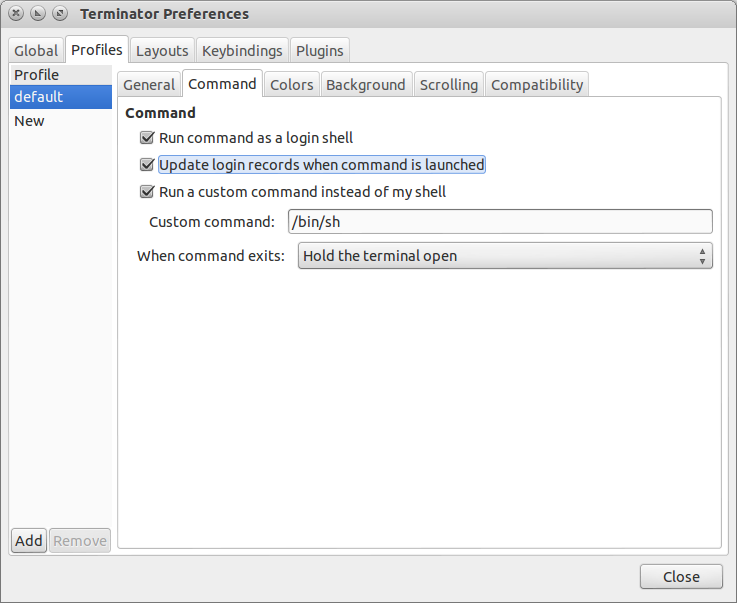 After a reboot Terminater used zsh. I filled in a bug report.

Ancient question, but after fighting with this for a bit:

tl;dr: Terminator reads off of the $SHELL environment variable. If you're in a graphical X sesson, this variable was set when you logged in, and won't get reset until you log in again, even after you run the chsh.

If you were to switch to a text terminal and log in there, you'd see that your chsh already took effect. Once you exit and log back in, $SHELL gets reset to whatever your shell is in /etc/passwd.

Not the answer you're looking for? Browse other questions tagged command-line zsh terminator or ask your own question.

46
How do you change the default shell for ALL USERS to bash?
35
chsh -s /usr/bin/zsh not working
4
When $SHELL variable does not change when I switch shell
7
Change environment variable (TERM)
3
How do I get terminator to use syntax highlighting?
6
Why is my default shell from /etc/passwd not started by terminals in a Unity session?
4
Change between bash and zsh via terminal profiles
0
Trouble running command on Terminator launch
4
How to set zsh as default for gnome terminal only?