How to lower the HDD temperature

I have 4 hard disk drives that have temperatures which go beyond the recommended 50 degrees (Celsius). (I have several Samsung Spinpoint F3 which are 1Tb each and they do have good temps, between 32 and 35 degrees. That's normal for me. But in this case, 50+ is not normal.)

I have already read the question and answer provided here, but none of the solutions helped. What tools can I use or what terminal commands should I execute to lower the temperature of these drives?

And on a similar note, if I were to use a method similar to this one, how would I know which hard drive I am reading? Where can I check to see which HDD is related to, for example, /sys/class/scsi_host/host0/link_power_management_policy ?

I have already tested powertop, hddtemp, disks and others to check and try to lower the temp with no luck.

Well found a way to lower the hard drive temperature, had to stay up all night.

Open Dash and type disks. You will see the Disks Utility pop up. Open it. 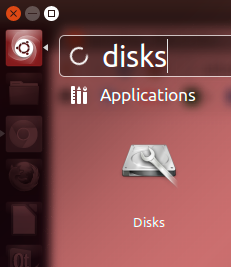 Now select the Hard Drive you wish to work with and then, in the green circle above, there is a button, click on it and select Drive Settings... 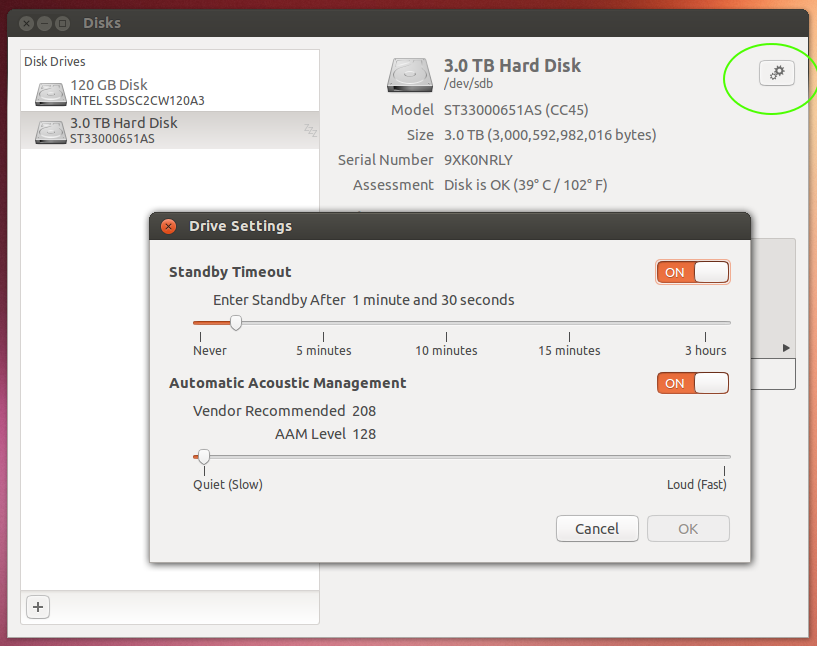 Depending on the hard drive you will get more settings or less settings. In this case I got Standby Timeout and Automatic Acoustic Management. So I changed the Acoustic from the Default to the lowest one which is 128 (As seen in the image above).

The temperature did not change for at least 2 to 3 minutes, but then it suddenly lowered itself by 1 degree. I then waited 5 minutes, 10 minutes, and the more I waited, the lower it went. It literally went from 53 degrees to 39 degrees. That's 14 degrees lower than the one I was used to.

I then added, just for a bonus the Standby Timeout, cause I was actually not going to use the hard drive all the time, basically only about 50% of the time I was on the computer. That lowered the temperature 2 to 3 degrees more. He is an image of hddtemp:

So hey, did not know Disks had this feature. The curious part is this. After searching a lot for this, I came to know that many HDDs do not have Automatic Acoustic Management (AAM), mainly because of lawsuits and patents (Go figure). But one of this is the same one I have, a Seagate Barracuda which has been mentioned to not have AAM support. So I wonder how did this option help the drive if it was not supported in this case.

Another helpful hint was found in this link which also helped.

They mention there the use of powertop, terminal commands and kernel options. It covers a lot, but the ones I took and used were:

This are mentioned in relation to the /sys/class/scsi_host/host0/link_power_management_policy line I was asking about. It just so happens the host0 part depends on which Sata motherboard connection you connected the hard drive to. For laptops, most of the time is host0. In my case with 6 sata connections I get host0 through host6. should be noted that this features will work on a newer kernel (At least 2.6.x an above, but since we are all into the 3.x then it does not matter), have an Intel AHCI compatible chipset and use a SATA drive. If you meet all of this requirements then you can use the line above in the following way:

This is not permanent since when you reboot you will have to do it again. You can added in some runtime file to make sure it is always activated.

Nota that adding the Standby Timeout will make your HDD take a little bit longer to mount if in standby. Also lowering the AAM a lot will lower the speed of Read/Writes by a little bit. This depends if is worth it or not. In my case it is, to lower the temperature of it.

UPDATE: After about 12 hours of testing, the HDD is normal again. In standby it stays between 33 and 35 degrees. When in use it goes to 39 degrees max. Still, it is 10 degrees less than what it had when not in used and almost 15 when it was in used. Am really happy and relief about it. Also this is without the air conditioning unit turned on. Simply on normal room temperature.

UPDATE: With air conditioning on, the HDD is finally able to get to 30 degrees. Before it simply stayed in the 50+ range. An image of how happy I am:

UPDATE: With exactly a month of testing I can say that the temperature has stayed under 30. Right now am in 26 degrees which is very good (50% less than the "normal" temperature it had before).

There are two ways to do this:

A hard drive does not produce that much heat, even under load - in this article the worst-performing models consumed under 10 watts when under load, and for "green" models the power consumption was below a watt when idle. So it is likely your four drives produce twice less heat than your CPU, even if you using your machine to do I/O intensive tasks for extensive periods.

Having said that, some time ago I used to have a system in which drives ran very hot (and failed regularly). When investigating, I found some articles which noted that a poor power supply may cause this - something along the lines "an overload on +12V line may cause the voltage on the +5V line to increase, which results in hard drives overheating" - or, maybe it was the 5V lines which was overloading, I don't remember.

Also note that cheap power supplies may have wide variations in voltage even without being overloaded.

Now I have some of the same old hard drives in another system and they're quite cool.

Sorry the answer does not include a nifty command to fix the problem :)

Not the answer you're looking for? Browse other questions tagged hard-drive temperature or ask your own question.

1
How to lower the temperature of my HDD?
0
Why is the hard disk drive too hot?
0
Increase in laptop temperature on dell 3521
0
Dell Latitude E5570 overheats on a single spot when running Ubuntu, not with Windows

3
sensors reporting weird temperatures
1
Hard Drive overheating on ubuntu, not on windows
16
How to reset SMART results
6
thinkfan control doesn't use the fan full potential when needed
3
MacBook Pro Temperature Issues (tlp and cpufreq used)
0
HP laptop temperature expectations
0
How are hddtemp, udisks2 and libatasmart compared to each other?