How cna I record any internal sound like mic in and speaker out from the same PC running Ubuntu, using Audacity or something else?

For example under Windows it can be done like this (I want to do something similar): Recording internal sound on Windows

To define the recording source for any recording application we may install pavucontrol.

As soon as we record any audio stream the name of the recording application and the source from where it records will be shown in the Recording tab. We then may be able to change the source to Monitor of <your soundcard> to record the output of our soundcard: 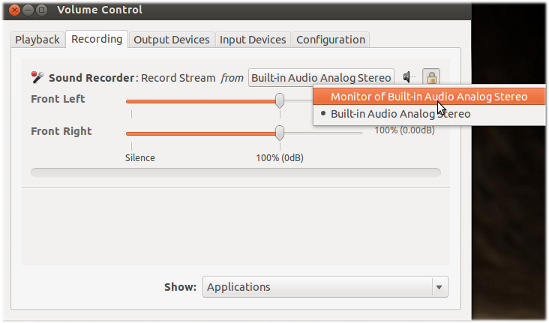 We may have to choose another audio profile in addition. This can be done from the "Configuration"-tab of pavucontrol, e.g. a "Duplex" sound profile for output of the microphone to our local audio sink:

Coming from Windows to Linux less than one month ago, I wanted to record a video that would capture game footage with audio from both my speakers (Nvidia HDMI output) and my headset microphone (Auzentech X-Fi Fore 7.1 PCI-E sound card) simultaneously.

I tried the above but could not get it to work. I tried Audacity, RecordMyDesktop, SimpleScreenRecorder. I realized that even if I managed to get one program to record the two audio sources together and a second program to capture the video, I would have to line them up in a video editor (OpenShot) which wouldn't be aligned to the millisecond.

In Settings → Audio, I was able to select:

For Source, I selected Screen Capture (XSHM) to capture the entire desktop.

The only way I was able to do this on 12.04 was to load ALSA's module module-loopback as recommended by Charl Botha in this screen-cast.

The short story ( as explained there ):

I think this module load has the same effect as the "Duplex" config recommended by @Takkat, but did not work on my machine.

My favourite GUI audio recording tool is Audio Recorder which is able to capture audio from all of possible sources. I'm sure this software is must-have tool.

Run it (my system locale is Ukrainan): 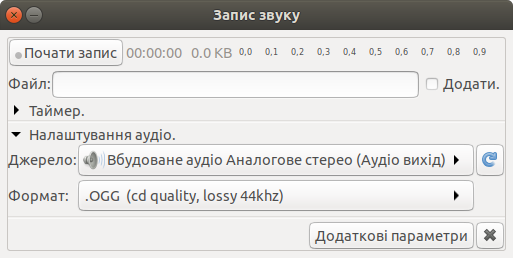 It's possible to select many of audio sources including Skype or even define your own.

You may have to select Analog Stereo Input (unplugged) in PulseAudio Volume Control (pavucontrol), in order to make it work.

This was the only way I was able to record audio after trying everything else I could find on recording audio from the sound card. Unfortunately you can't listen to the output at the same time with this setting.

150
How to record output to speakers?
2
Is there a software to record audio with GUI?
2
Audacity not showing pulse audio option
1
How to record from Mixer
0
Sound recording from built-in mic, not external mic
0
screen record with input and output sound ubuntu 14.04

9
Which sound profile will allow me to simultaneously hear and record system audio + microphone input?
2
Sound Input Works in Audacity but not in PavuControl
4
What's a good Soundflower replacement for Ubuntu?
0
mic stopped working for some applications
9
Sound only out of internal speakers, never headphones (Alienware laptop, Ubuntu 15.10)
1
How to record from Mixer