I make gaming videos and recently installed Ubuntu and I haven't been able to find a good screen recorder for gaming. Are there any recommendations (preferably free ones) that can record in HD, use multiple audio sources (i.e. Headset and computer sound), and is in the Ubuntu Software Center? If it's not in the software center I still might get it, just preferably in the software center. I've already tried Kazam Screencaster and RecordMyDesktop, but they didn't work out for me. Thanks guys!

I can actually vouch for the answer that Grumbel made about recordmydesktop in the terminal. It has been the best one when it comes to resource usage. Also ffmpeg/avconv. But there are a couple of factors you should take into account when recording:

From my experience, having a good computer with enough CPU, RAM, VIDEO and the other obvious stuff for it to record (Specially from experience the hard drive Read/Write speed) you can use Kazam for it (Since you are talking about HD). But not the Kazam that comes with the Software Center but the one that comes in the PPA. It has better performance the one that comes in the PPA. At least compared to the one in 12.04 or 12.10. If you want to try it then do the following:

But take into consideration that:

Notice I don't mention the sound. This is because sound has less of an impact to the performance of the PC than the actual video.

For multiple audio sources, Kazam (The one in the PPA) offers: 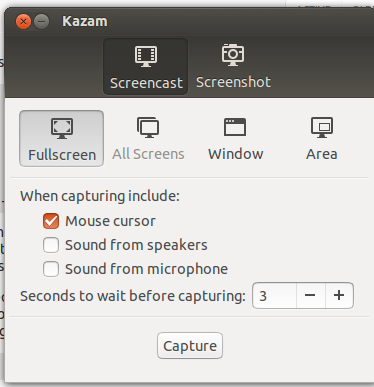 RecordMyDesktop is the easiest solution, you use it like:

However it is slow and not fast enough for gaming at large resolutions. It also has issue when it comes to very long recordings, which tend to corrupt, so it's a good idea to stop and restart the encoding every 30min or so, to not risk a corrupt stream.

For proper game capture you need GLC, which is specifically written for OpenGL and only works with OpenGL apps. It's not in Ubuntu, but you can download the source and compile it yourself. Once compiled, you need to start your game via glc-capture with a line like:

GLC is fast enough for capturing games at 1280x720 or more depending on your computer.

If you need more flexibility when it comes to capturing multiple audio sources you can use pulseaudio tools. Most important is pavucontrol, it's a mixer app for pulseaudio that lets you decide what gets recorded and even switch recording sources at runtime. To select an recording device go to "Input Devices/All Input Devices" and select one named "Monitor of Build-in Audio Analog Stereo". All the Monitor ones allow you to record audio output. This is something you likely will have to do when using GLC and recordmydesktop, as I think by default they will record the line-in or something like that, not the actual speaker output.

Pulseaudio also comes with numerous modules that allow you to redirect or filter output. For example to create a virtual Soundcard that doesn't output to your speakers, you use:

Documentation can be a bit lacking, but it should allow you to do most things you might want to do. For just recording game audio and headset output separately, you can setup pavucontrol so that GLC records the game audio and then use a separate parecord to capture your headset. 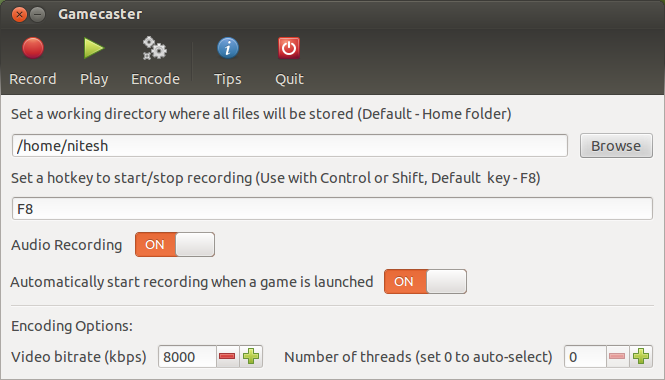 Gamecaster is a graphical frontend for open source project glc. It can capture real time footage of any Linux game that uses ALSA for sound and OpenGL for drawing.

I have updated Gamecaster for both Ubuntu 12.04 and 12.10. It includes an important bugfix that will prevent Gamecaster from crashing on launch if you use any other language than English on your desktop.

At the time of writing, is only available for 12.04 and 12.10. The development seems to have ceased. Press the keyboard combination: CTRL-ALT-T,
to open up your terminal, and copy/paste the codes below.

I recommend SimpleScreenRecorder. You do have to use the command line to get it but it is really simple. I had problems with a lot of other screen recorders having huge video tearing issues and stuff but SSR has worked really well for me

That's all there is to it. Hope this helps!

Try out glc, it's not in the software center and I don't know if it supports multiple audio sources, but it was the only one which worked fine for me with OpenGL.

You can try Open Broadcaster Software (OBS). It is made for multiple Operating Systems; I use it on my Windows gaming machine, but it also runs natively in Linux.

It captures multiple sound sources, as I often stream/record games, Mumble, and other things.

It is also probably in the repositories.

1
looking for a screen recorder for ubuntu 16.04