Is this command to remove old kernels safe to use?

While browsing the internet for Ubuntu articles, I came across this command:

The author said that this is a single line command which will delete all the previous versions of Linux, leaving only the current one!

I'm actually looking for such a command, but I'm not so sure on how safe this is. I'd like to know:

I become very confused and frustrated when I try to infer out all by myself. How does this command work for it contains numerous /, |, \, *, and ^ characters which are hard to Google for.

I am looking for a step by step translation & explanation for this command which I was unable to find across the internet!

I'd say: don't use it in the current form

Remove the harmful parts and leave out anything that runs as root.

For example, cut it down to this:

which just only outputs stuff and runs with regular user permissions. Once you agree with these kernels to be removed, you can append | xargs sudo apt-get purge yourself. It's without the -y option, intentionally, so you'll be asked for confirmation on the changes about to be made to your system.

Quite some question are probably already asked about this. Relevant ones I found so far:

You asked for a step-by-step explanation so here goes:

Lists packages starting with linux- in the package name

which will pipe the new list into xargs, which will send it as an argument to

which will purge those packages without giving you a chance to change your mind.

Or perhaps it's more accurate to say it will send that list into the purge command and leave it at that. Whether or not anything is purged — and importantly — exactly what is purged depends on the ouput of the previous commands.

Is it safe? In this case that all depends on how well the author of the post where you found it understands regular expressions and sed syntax. And there are whole books on both of those topics.

I started by dissecting the commands, reading the man page for each.

The output of uname -r is then piped to sed with more regular expressions, the output of which is passed to xargs

So xargs translates the sed output into package names and passes them onto sudo apt-get purge -y which automatically answers 'yes' to all prompts:

-y, --yes, --assume-yes Automatic yes to prompts; assume "yes" as answer to all prompts and run non-interactively. If an undesirable situation, such as changing a held package, trying to install a unauthenticated package or removing an essential package occurs then apt-get will abort. Configuration Item: APT::Get::Assume-Yes.

Altogether it seems this command will do what you want, though to know for sure we'd have to translate sed's regular expressions.

here is a screenshot: 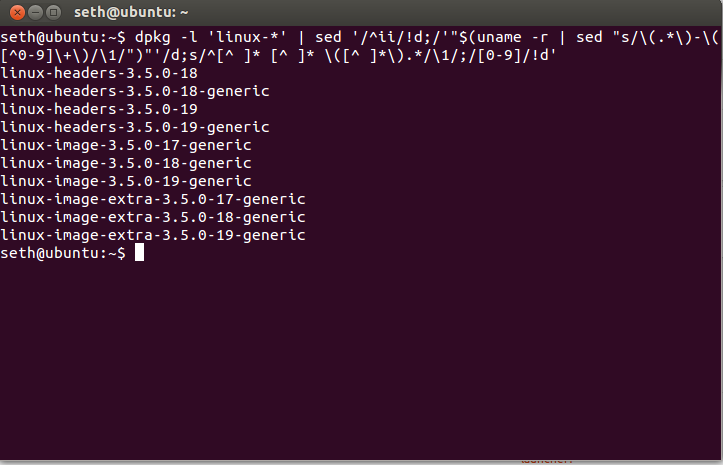 A less dangerous version of this script that removes unused and out of date kernels matches for rc in the beginning of a line of the dpkg output, instead of ii. (See https://askubuntu.com/a/18807/220802 for an explanation of these flags.) In my case this exactly matches all kernel packages which are not protected by /etc/apt/apt.conf.d/01autoremove-kernels.

which you can pipe to | xargs apt purge -y now. Please note that omitting the -y flag will result in abortion of the operation.

Then you can check your /boot directory for further remnants of older kernels. In my case there were more files hanging around that were not tracked by apt anymore, which were removed with ls /boot/*-5.4.0-{00..56}* 2>/dev/null being heartfully piped to | xargs rm -rf.

Not the answer you're looking for? Browse other questions tagged package-management security command-line or ask your own question.

753
How do I remove old kernel versions to clean up the boot menu?
136
What do the various dpkg flags like 'ii' 'rc' mean?
98
Why doesn't Ubuntu remove old kernels automatically?
33
Removing old kernel entries in Grub
10
How to "clean" previous kernels after update?
1
Unable to remove older images from boot

6
Can someone spell out what this wget command to install Heroku toolbelt does?
4
Command line web browser using SSH, is there any way i can use
3
How can I get unformatted ip address information in the shell?
1
How to install a downloaded third party software (Nero Linux 3) via command line?
0
The program 'sed' is currently not installed. You can install it by typing [sed: not found]
3
How do I remove the unnecessary part of this file?
1
How to change the value of a variable in a section of a file only?
5
sed from terminal when replacing double quotes with single quotes