Prevent screen turning off when watching video in XBMC [closed]

Ask Question
Asked 9 years ago
Active 5 years, 5 months ago
Viewed 18k times
8
Closed. This question is off-topic. It is not currently accepting answers.

In 12.04, the screen never went to sleep while watching videos in XBMC. However after upgrading to 12.10 and changing no settings, it does.

Is there any way I can prevent the screen automatically turning off while playing a video in XBMC, without actually disabling the screen from turning off at other times?

Ideally, is there a XBMC specific setting for this? Was this a feature of XBMC that is now somehow broken in 12.10 or has this changed due to some other non-XBMC change within Ubuntu?

We can create a shell script which would simulate mouse movement at a specified interval (only when XBMC is running) and prevent your screen from turning off.

How to use it with other Applications

This was an example for XBMC (Process name xbmc.bin). However, it can also be used for any other process of your choice by just replacing xbmc.bin in the Script mentioned in Step-2 with the name of the process you wish. Find the following lines in the above script:

And replace xbmc.bin in both lines 2 and 3 with the process name of your choice.

How to find the process name

Here we can see that Firefox is just named as firefox. So, if we want this behavior when Firefox is running; we would replace xbmc.bin in the script with firefox and everything else would work just fine.

Acknowledgement: I had found the script here. However, I have made necessary modifications to make it compact and satisfy the demands of the question.

A very simple solution is caffeine. Caffeine is a 'status bar application able to temporarily prevent the activation of both the screensaver and the "sleep" powersaving mode.'

Enabling it is as easy as clicking the status bar indicator, but you can also set it up such that it automatically disables the screensaver when you start xbmc. See the screenshot below 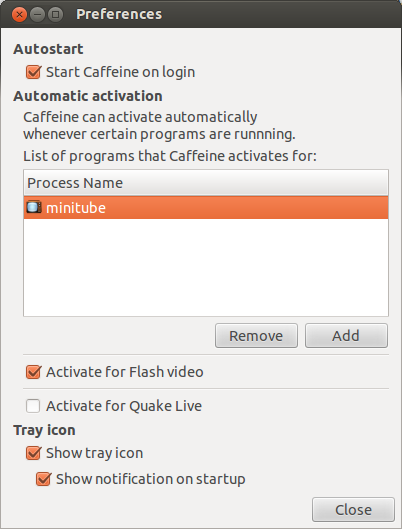 from 15.10 onwards you can install without ppa

I'm not sure what version you have installed, but the version from the PPA* doesn't seem to have it on my system. This can be because I have different settings in ubuntu of course, so your milleage may vary.

If you don't, you can try to use XBMC as a session (on your login-screen, press the ubuntu logo next to your name and select XBMC. You won't get unity, but just fullscreen XMBC). The settings for unity will not be there, so you might luck out on not having a screensaver. (If you have auto-login set, you need to press logout to get the login screen)

These solutions all turn the screensaver off whenever xbmc is running, not just when it's playing videos. As it has a built-in UPnP server, I leave it running 24/7 but I only want to disable the screensaver when a video is being played locally.

Here's what I came up with: turn on http and JSON support in XBMC. Then loop making a request to find out whether the player is active or not. If it is, issue an xscreensaver-command -disable (you can adjust this per your screensaver). If not, do nothing. Checking every 50 seconds is plenty for me.

Not the answer you're looking for? Browse other questions tagged 12.10 power-management xbmc or ask your own question.

102
How to prevent my screen from either dimming or the screen-lock starting when watching YouTube?
27
Is there a way to cheat javascript games (like Unicoin mining) where rapid clicking is required?
5
Prevent screen from turning black on server
1
Screen goes off while watching a video on Youtube

0
Power failure during upgrade from 12.04 to 12.10 resulting to desktop not working
2
Upgrade installation interrupted, and system hangs on login
3
How to disable screen and powersaving during Video Playback
9
How do I prevent my display from turning off when screen is locked?
6
How to disable screen power saving in GDM3 login screen?
0
21.04 Prevent sleep while sharing media (UPnP/DLNA)