Can Wubi use the ISO I already have?

The Windows Installer for Ubuntu desktop instructions say that an ISO image for Ubuntu is downloaded during the installation process.

But what if I already have an ISO image for Ubuntu. Can I make the Windows Installer use that, so it doesn't have to download an ISO image again?

12.04 LTS and 12.10 are the versions of Ubuntu I'm interested in installing, in case that matters.

Yes, if you have both wubi.exe and the ISO image for the same release, you can make Wubi use the ISO so it doesn't have to download the files again. This makes installation considerably faster! 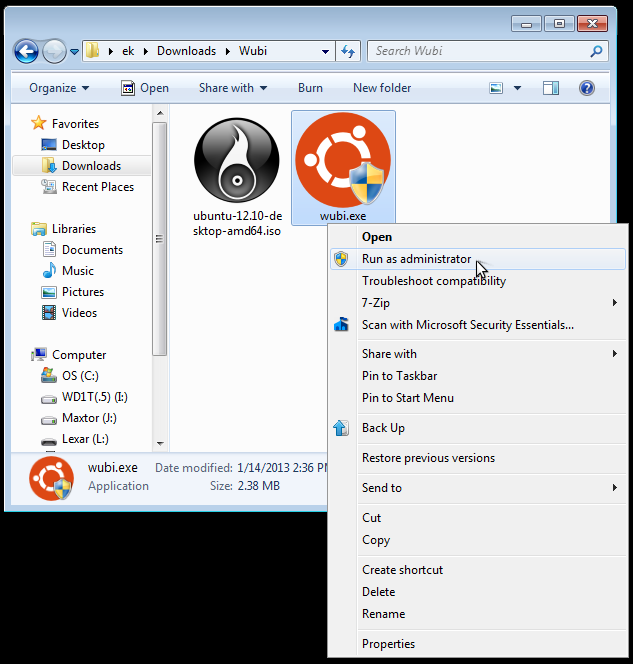 That's it. With the ISO image in the same folder as wubi.exe, the Wubi installer will automatically attempt to use the ISO image (and assuming it's an ISO for the same version of Ubuntu, and the ISO is not damaged, there should be no problems).

Assuming everything goes well, it should be possible to install without even being connected to the Internet when wubi.exe is run. However, if possible, it's recommended to be connected to the Internet while installing Ubuntu (whether you install it inside Windows with Wubi as you plan to do, or alongside/replacing your existing Windows or other OS by by booting a CD/DVD?USB).

Remember, the Windows installer (wubi.exe) and the ISO image should be for the same release of Ubuntu.

Windows 8 currently uses UEFI so it might be problematic with Wubi on Windows 8 so you have to download Rufus (fastest one that I have tested) and the ISO.

Since you have already the ISO File plug your USB Device in a fastest port possible to ensure that Rufus will install system files in a faster way.

How to make Ubuntu USB:

Ensure that your BIOS supports USB Booting so you can run Ubuntu from there, If it does not support USB booting (like my computer), then you will have to download and install another boot manager (plop boot manager) so you can boot from USB.

How to boot from USB Drive:

How to install Ubuntu:

How to finalize installation:

Not the answer you're looking for? Browse other questions tagged system-installation windows wubi downloads iso or ask your own question.

0
How to install with wubi without internet connection
7
How to boot WUBI installed Ubuntu within Windows 8?
2
What to do with an Ubuntu disk image that appears as a WinRAR file?
0
Install Lubuntu 16.04 on Sony Vaio PCG FRV35 (Laptop from 2003)

1
Is it possible to install Wubi using the ISO?
1
Wubi not downloading ISO
0
how to install ubuntu 12.04 from iso using wubi
2
How to install with Wubi when it says “Could not retrieve the required disk image files”?
0
Wubi downloads ISO even though it's already there
0
Use WUBI to install downloaded ISO
1
Wubi ignores .ISO file and downloads from beginning in Ubuntu 14.04
2
I downloaded Ubuntu but I can't find the ISO file