I have about 70 mp4 files, and I want to extract the audio files directly without transcoding further. All the mp4 files have aac audio files.

I understand I can use the following command to extract the audio file from one of the mp4 files:

How do I extract all the audio files from all the 70 mp4 files, so I end up with 70 aac files?

You can use a simple for loop:

or on one line:

What is does is run avconv once for every file named like *.mp4 where the filename is stored in the ${i} variable.

Xiao's answer is generally the most useful if you have all the files in one directory; but if there are MP4 files scattered in different directories, you can use this find command to convert them all.

This uses a slightly different form of bash string substitution at the end: "${0/%mp4/m4a}" tells bash to replace mp4 with m4a, but only if the mp4 is at the end of the string.

To avoid multiple files being processed at the same time (which might use too many resources), use parallel. By default, it only does one job at a time. If you want to use multiple CPU cores in parallel, try parallel -j 4 ... for 4 jobs in parallel. Also check out man parallel.

This line will extract aac audio files from selected videos and put them into m4a containers.

When working straight in the CLI, substitute%F with the list of your input files. E.g. *.mp4.

Inspired by this answer, by a previous answer to this question, and by evilsoup's comment to the latter (saying: 'raw aac files can't contain metadata; if you want to keep metadata from the original files then use m4a (which is just another name for mp4, but is fairly widely recognised by audio players) instead of aac as a file extension').

I use such commands in Thunar custom actions,

limiting the application to videos that contain aac audio. 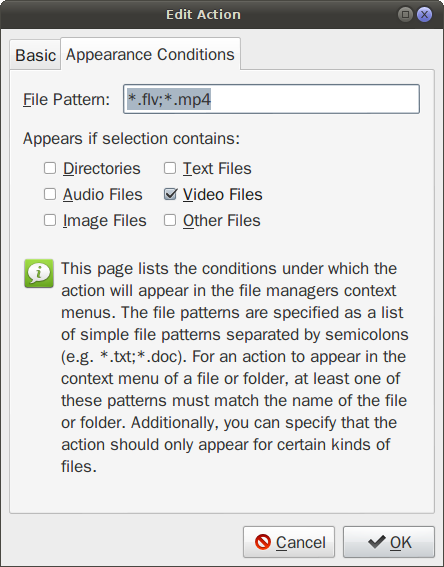 To have a terminal window open during processing, which closes at the end, the command can be changed like:

I extended @Xiao-Long Chen's answer, turning it into a script that skips files when the output file is newer:

Not the answer you're looking for? Browse other questions tagged 12.04 mp4 avconv aac or ask your own question.

137
How can I convert audio from MP4 or FLV video files to mp3?
4
How to extract audio from Webm without transcoding?
2
How to convert multiple files to mp3 in Thunar custom actions?

2
bash script : is it possible to recognize video format from files (to batch extract audio from them)?
7
How to cut audio file with avconv?
2
Why doesn't the faac package support mp4?
0
Screencast with avconv cuts off last 5 seconds of audio
15
How to extract aac audio from an mp4 file to m4a
4
avconv - Extract one video frame and repeat it
7
Convert .mp4 to .ogg keeping only the audio, with Ubuntu 14.04 and avconv
6
How to specify flac compression level when converting with avconv?
1
Is it possible to convert only audio in video file using avconv?