I've just installed Ubuntu 12.10 on my Samsung 900X4C. However, I can't get the keyboard backlights to work.

I added the keymaps as per community docs - Samsung Series 9 (section Function Keys). But regardless of pressing Fn+F9 or F10 (backlight decrease/increase), I get:

How can you fix the keyboard backlight? The Fan button (Fn+F11) doesn't work either, if you also know about that one it would be great.

I bought the exact same model (900X4C) a couple of days ago and I've successfully seen the F9/F10 keys work, and I didn't even had to install the Voria / samsung-tools package either - I just fiddled around with the /lib/udev/keymaps/samsung-other file and the corresponding force-release file.

Unfortunately, I messed up the install process (I wasn't running Ubuntu in UEFI mode and I had swap) and I decided to reinstall, since then I was unable to replicate the working keyboard backlight.

I just felt like that was something that may help others more knowledgeable to find a solution.

Here are a couple of (perhaps useful) resources I came across:

Also, a couple of experiments and results...

After a fresh install of Ubuntu 13.04 and update this is what I get:

I also managed to get the correct keymap codes for this exact model by doing /lib/udev/keymap -i input/event3 and gathering the output when I pressed a FN + Fx key combination:

You can use showkey to get the decimal code representation for the combination pressed.

I'm sort of giving up on this for now but if anyone gets it right, let me know!

The point #2 makes me suspect the keys are not being released.

The above was taken from /lib/udev/rules.d/95-keyboard-force-release.rules.

Is it possible there is bios options/settings for light and fan?

Simply Googling your laptop model reveals results including pages that show your laptop will need a darkened room for keyboard back light to come on as there is a sensor to automatically switch keyboard back light accordingly to available light levels. This may be the cause of indicator showing brightness levels with no apparently working backlight . The settings for these are available through Windows after installing Easy Settings. 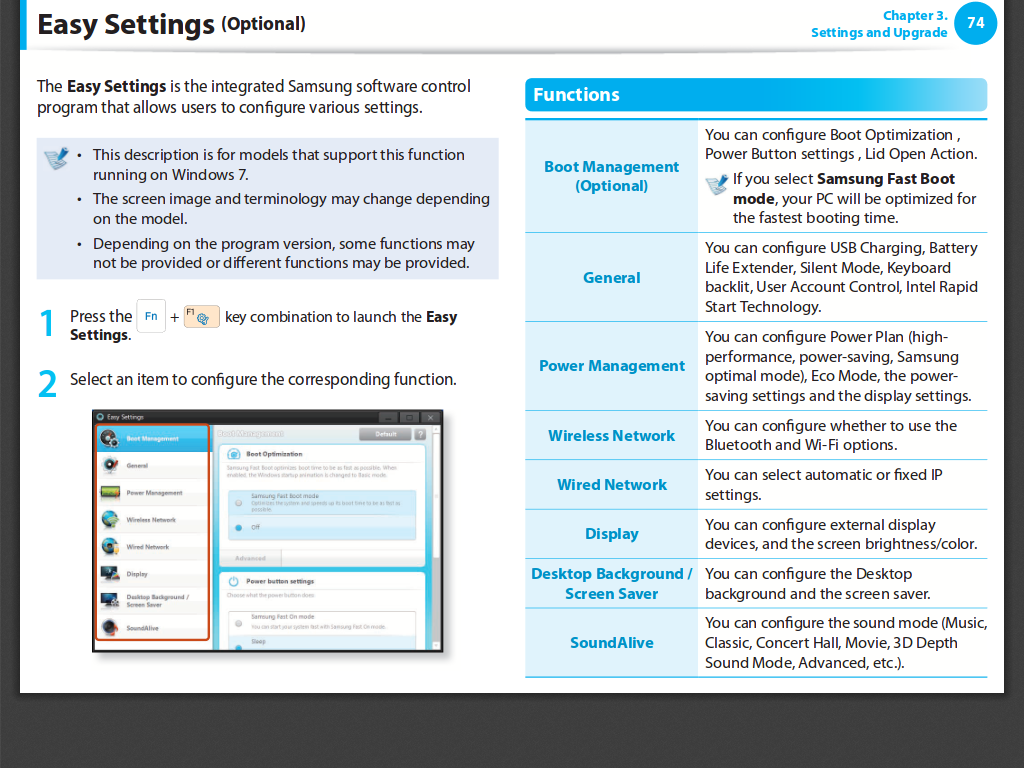 You could download Easy Settings from manufacturers webite after making sure you have the exact model or are on the right page for your specific model. That is if you have a Windows to use to at least confirm everything does work as expected.

The Community Documentation confirms the scancodes at least are the same for 9 series and includes your model as being confirmed working after configuration i.e. installing kernel module and editing two files.
Here is quote from https://help.ubuntu.com/community/SamsungSeries9 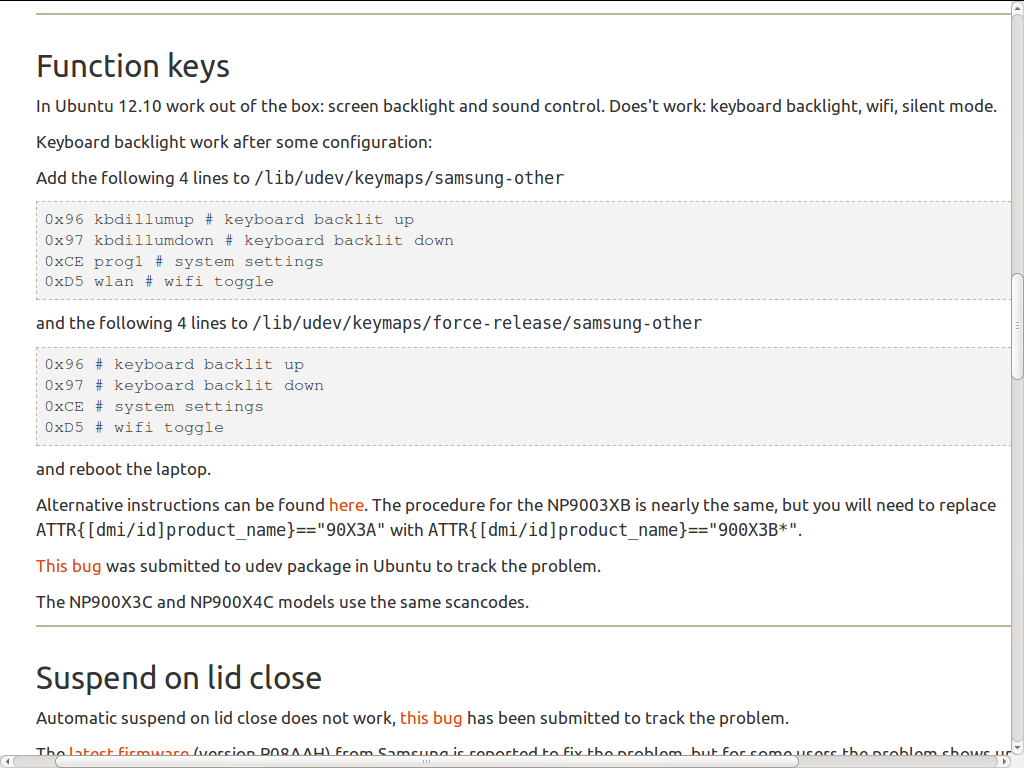 Try to methodically read the posted links given. try the other options. i.e. alternative instructions through which there is the linked previous post which are all in reversed chronological order so it may be worth trying to read links in this order:

I knew my laptop had an option for UEFI firmware support, so I turned this on, because UEFI is cool, right? Then I discovered that if one uses UEFI subsystem, fedora falls back to use grub-0.9x rather than grub2, there were some compatibility issues as far as I know, so I went for the legacy BIOS option, because I really wanted to have grub2 booting my OS.

and the answer from @MrNice here quote;

You need to not load the samsung_laptop kernel module. This module in efi mode does not work as it goes and write to parts of memory making the kernel throw a check exception and panic. Have the same issue with arch. But then you lose the keyboard backlight. Imho if you need that you will have to reinstall both windows and ubuntu in bios mode.

or try different kernel parameters to get samsung-laptop module loading. Quote from http://www.mjmwired.net/kernel/Documentation/kernel-parameters.txt

Kernel Parameters
2 ~~~~~~~~~~~~~~~~~
3
4 The following is a consolidated list of the kernel parameters as implemented
5 (mostly) by the __setup() macro and sorted into English Dictionary order
6 (defined as ignoring all punctuation and sorting digits before letters in a
7 case insensitive manner), and with descriptions where known.
8
9 Module parameters for loadable modules are specified only as the
10 parameter name with optional '=' and value as appropriate, such as:
11
12 modprobe usbcore blinkenlights=1
13
14 Module parameters for modules that are built into the kernel image
15 are specified on the kernel command line with the module name plus
16 '.' plus parameter name, with '=' and value if appropriate, such as:
17
18 usbcore.blinkenlights=1

which are not relative but thought it was funny when finding these!

Means it is decision time! UEFI or keyboard backlight?

Using the UEFI option will allow installation of recent releaes of Ubuntu.

In order to make the keyboard backlight function keys work on a Samsung Series 9 model NP900X4B with Ubuntu 14.04 (Trusty Tahr), run the following commands from a shell prompt:

If these commands work for you, then you might want to put them in a init script. I have a file set-kbdillum-keycodes.conf in /etc/init, with the following contents:

The above solves the problem on the NP900X4B. If you have another model and this solution does not work on your notebook, you might want to know how I got the solution for the NP900X4B and perhaps adapt it for your notebook model.

Before issuing the two setkeycodes, if I looked at the kernel log (by saying "tail -f /var/log/kernel.log" in a shell window) and pressed the keyboard backlight function keys, I would see messages such as

If you have another notebook model, you might need to use other scancode values. The corresponding keycode values should still be the same, as these are the values known by the Linux kernel.

First try installing Voira.you can get the ppa here. Install samsung-backlight from there.

if that doesnt work try this:

Finally found a solution to this problem!

The trick was to re-install Ubuntu with CMS-mode instead of UEFI-mode. You can change this setting in BIOS. Mine was set to "Both UEFI and CMS". But I changed it to "CMS" only and reinstalled Ubuntu. Now my keyboard backlight and its indicator is working perfectly.

Partial and moderately inconvenient workaround: boot into windows and put backlight on, then restart into linux and they stay on

Not the answer you're looking for? Browse other questions tagged laptop samsung backlight udev function-keys or ask your own question.

7
How to dual-boot Ubuntu + Windows 8 on a Samsung Series 9 laptop?