I am experiencing a serious issue with the "Dark Theme" functionality in Ubuntu Studio 12.0.4 (Low Latency) & Mozilla Firefox 17.0.1. The Google Search Engine Field input text is rendering "Light Grey". It is in fact so faint that it is nearly undetectable to the naked eye without highlighting the input text. 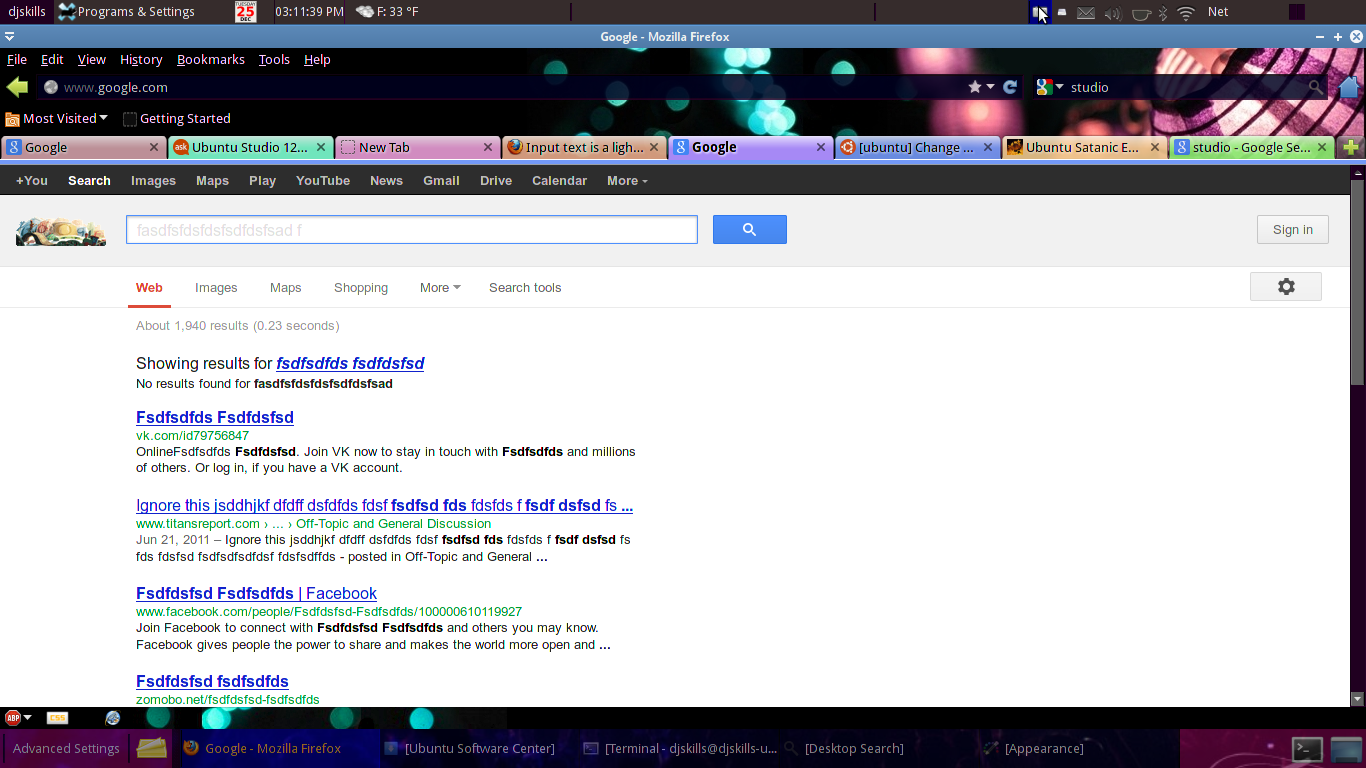 Is there a way to force Mozilla Firefox to render standard colors? How can I prevent the theme colors from rendering in the web browser? There have been similar issues reported on previous versions of Mozilla Firefox. Please view this entry below:

Here is a Screenshot of the Ubuntu Theme on my desktop before the assumption is made that my applied Firefox Theme is causing the "Light Grey Text" you see. You may view this below: 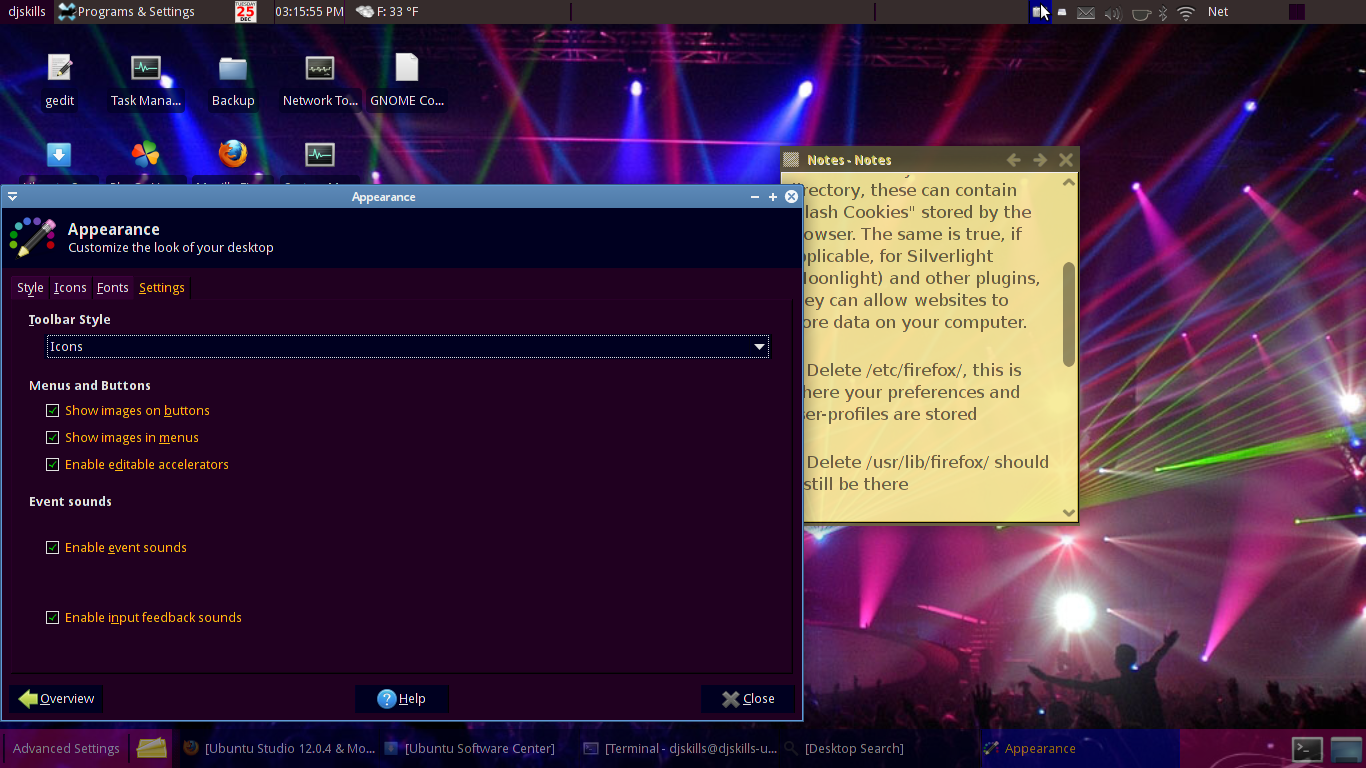 The "Light Grey Text Form Field Issue" has been present way before I added my Mozilla Firefox 17.0.1 Theme. Whensoever I choose the default "Ubuntu 12.0.4" Theme the "Light Grey Text" issue disappears as the input text becomes Black. I've done a complete uninstall of Mozilla Firefox 17.0.1 in an attempt to remedy this issue utilizing the "Synaptic Package Manager". I was also sure to purge any remnant Mozilla Firefox files (customizations etc.). As an added step I've also been sure to review any Mozilla Firefox settings that may be causing this issue. This is just one more Screenshot so that you can see the "Use System Colors" check box under Firefox Preferences is unticked: 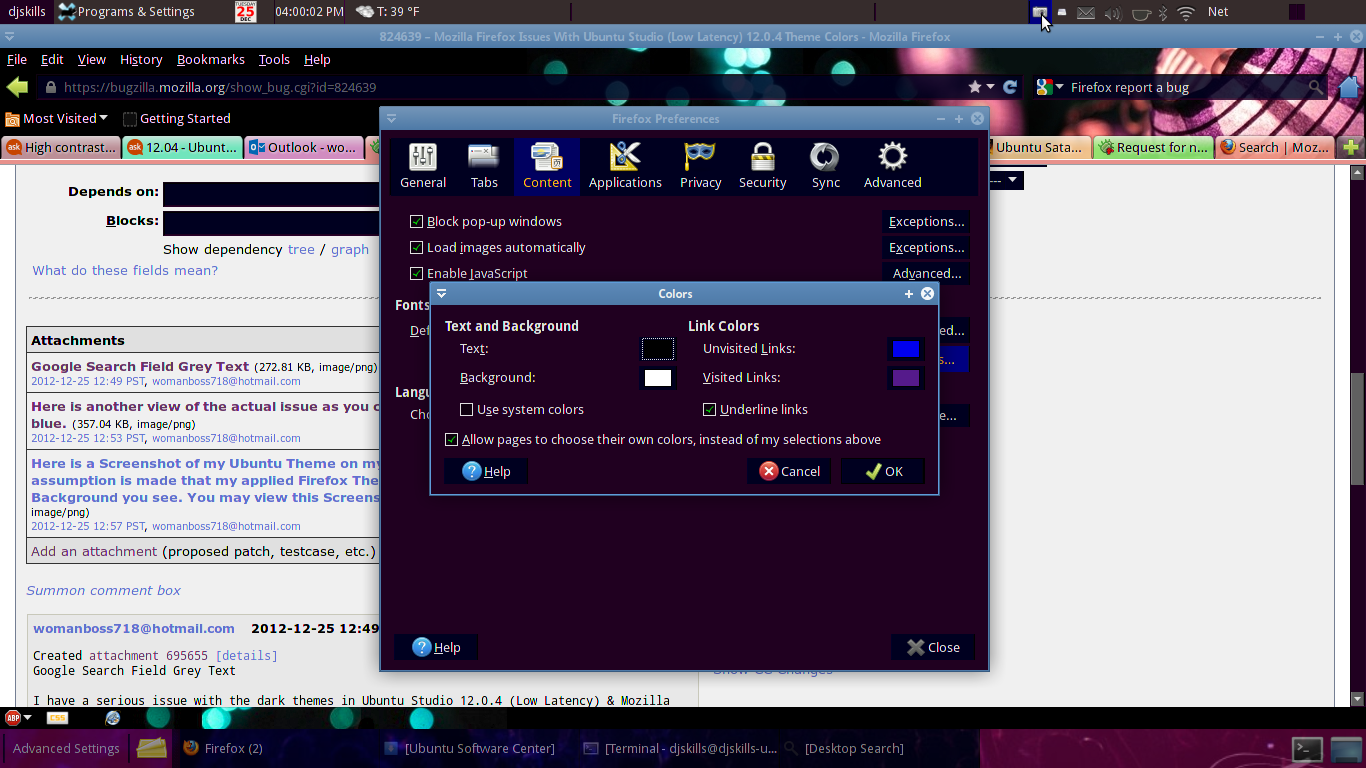 I've researched this all to no avail. Please keep in mind that I am a Ubuntu novice that requires a detailed explanation as I am migrating from MAC OSX & Windows 7. I am diligently seeking a fix for this as I don't wish to change my theme just to have Mozilla Firefox function properly.

This issue has been reported to Bugzilla@Mozilla for further troubleshooting and observation and I have received a response. You may view that bug report here: Bugzilla Bug Submission I will provide further updates in the comments section as warranted regarding Mozilla's response.

Browse other questions tagged firefox themes text or ask your own question.

3
Need to modify gnome 3 theme for browser
1
Text color sometimes unreadable in Elegance KDE Desktop theme
1
How can I restore my Unity themes to their defaults?
21
How do I get rid of the Ubuntu scrollbars and theming in Firefox 46.0?
0
How can I make the text color on my ubuntu theme work with different background colors?
14
Disable system style for Firefox form input elements
44
Firefox 57 shows dark input boxes/dropdown menus with dark text on Gnome dark themes
4
How to make Firefox look more like the current GTK theme?