Why do grub.cfg and actual boot options differ?

After a recent upgrade my boot options were changed.

Following instructions I found, I downloaded a tool called grub-cfg and used it to change my boot options. Unfortunately, it didn't work.

The options from my configuration in /boot/grub/grub.cfg and the boot options that are actually shown are different. Here are my grub.cfg headers (my full grub.cfg is here): 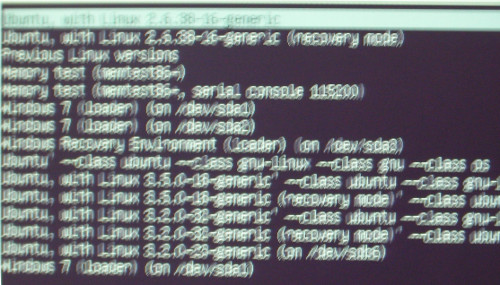 If I understand things right, the entries from the grep are exactly what I should be seeing on the boot screen, but they obviously aren't. I want the grub boot options to be what I set them to with grub config; the default should take me to the 12.10 kernel instead of the 12.04 (2.6.38-16 generic) kernel. What's going on?

Here is a bit more information. I was looking at /var/log/system.1 and found the following

So what happened is that after the last upgrade grub is reading 12.10 /boot/grub.cfg but parsing the /etc/grub.d from the 12.04 area.

Does anyone have suggestions where to look next?

How can this be?

After considering the discovery that reboot used a different partion for the /etc/grub.d files than the current OS version, I decided it must be using grub from the older install. I looked at the grub configuration graphical tool and discovered an option to re-install the MBR and did this. Problem solved -- I now boot from the proper grub.cfg file.

Thanks for the assistance. The suggestion about grub.d by WindowsEscapest is what put me on the right track.

Not the answer you're looking for? Browse other questions tagged grub2 or ask your own question.

2
Grub no longer boots after kernel update (second time now)
7
Windows 7 doesn't boot after Ubuntu install
0
Ubuntu 10.04 and fedora 14 grub conflict
1
Unable to boot: Missing Operating system
49
How can I add the Memtest86+ options back to the Grub menu?
2
Problem to get inside Another OS (Windows 7)
0
Can't get to login screen
4
update-grub ignoring some options in /etc/default/grub
0
Grub.cfg doesn't show any of my boot options