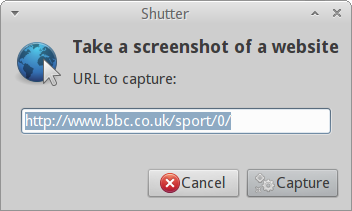 This Chrome extension works well for capturing the entire webpage.

2
how to capture scroll window in ubuntu
113
What screenshot tools are available?
13
How to take screenshot of complete webpages?
5
How can I print a webpage to a PDF in a single, *continuous* page?
3
How to enable globe in Shutter in Ubuntu 18.04?
0
Take scrolling screenshot in Ubuntu