Software to read a QR code?

I saw a QR code reading a book, but I don't have a smart phone to decode it.

So I just took a picture of it and saved the picture to my PC. I downloaded libdecoderqr0, libdecodeqr-dev, and libdecodeqr-examples for reading it. But I don't know how to use them.

What do I do next? Or is there a nicer way to read QR codes?

and save that QtQR image to a file called askubuntu.png, then the zbarimg utility finds and decodes the QR code

There is also a zbarcam utility, which you can use to decode QR codes spotted by your web cam.

A graphical interface for creating and reading QR codes. 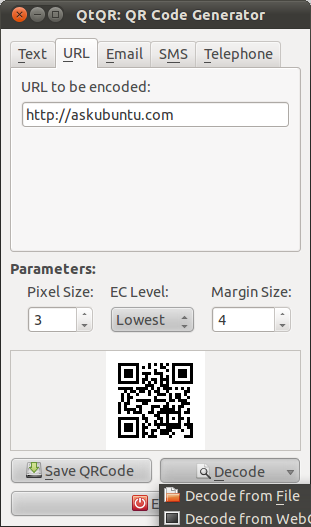 QtQR can read QR codes from image files or from a webcam. It is able to recognise a number of specific types of QR code including web links, email addresses/messages, SMS messages and telephone numbers.

You could potentially scan the QR code from the book using a webcam. If you do this, ensure there is enough light and that you are holding the QR code flat and still. You will see a window with the webcam input on the screen. Wait until green dots appear then close the window and QtQR will tell you what was contained in the QR code.

You can also install newer versions of QtQR by adding the PPA ppa:qr-tools-developers/qr-tools-stable and installing the package qtqr.

In 2020, you should use CoBang to scan QR code. It was written recently by me, to catch new technologies in Linux desktop. 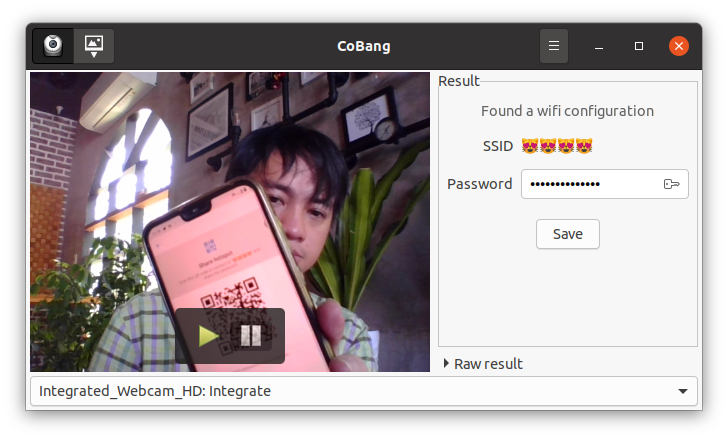 It doesn't support generating QR code yet. It is not high priority because there are already some websites to do, with pretty beautiful pictures.

Google Chrome has an extension in the Chrome Web Store called QRreader.

If a QR code exists on a webpage, just right-click on it and voilà!

I actually wanted to be able to read these QR codes myself, so I made a little app that sits up on the system tray, you click it and it highlights all of the QR codes (or bar codes) visible on the screen and tells you what they say... Also, you can click on it and copy any of the code text to the clipboard to paste into a browser etc. I'm using ZBar, and you can check it out here...

Anyone wanna help me turn it into a package?

There's a Brainstorm request for a QR reader here: http://brainstorm.ubuntu.com/item/15111/ Included in the comments are links to Tbarcode and Decodecamera which you might want to check out. I'd link directly to them, but I can't post more than one link yet.

QTQR is not possible to install onto Ubuntu 10.04 LTS - there are broken packages. Instead of this you can use this link to get it installed.

Qreator is another QR-code creator:

Open a terminal with Ctrl+Alt+T and type these commands:

Use a couple of existing utilities:

The copy QR and bar codes to clipboard with this one liner:

Make a shortcut for it:

If your .profile is well set up so that your local bin folder is in PATH (after next login) you can run qrr and select with your mouse a portion of your screen containing a QR code, the code is in your primary selection. Use xclip -selection clipboard to copy to clipboard.

14
Could I use my webcam as a barcode reader?

15
Is there a Source Insight alternative?
4
Looking for code editor software with following functionalities
11
Software for free netcafe (so computer tracking software)
3
What IRC client(s) would allow me to filter out log messages?
0
which is better, "Install ubuntu alonside windows" or "something else"
1
Application (or code) to download full size images from a gallery with thumbnails
4
How to organise tabs in the Xfce Panel by workspace?
13
Anti Censorship software