I have Ubuntu 12.04 installed through Wubi on my laptop. For some reason when i click on Ubuntu on start up (when you have to either select windows or Ubuntu) I get the following screen, the grub cursor keeps flashing.

Could you tell me what I can do to fix this problem and to start Ubuntu normally?

Sometimes the root.disk, the virtual partition that Wubi uses to boot, gets corrupted. This is a file that lives in the \ubuntu\disks\ directory. If Grub (inside wubildr) cannot mount the root.disk, it cannot show the grub menu (which is stored on the root.disk) and then it just drops you to a grub prompt to await further instruction.

There is nothing you can do from the grub prompt until you've figured out the problem with the root.disk and, odds are, there is NTFS corruption. It's fairly common, for example, if you've performed a hard shutdown or reboot. In some cases, the reason isn't clear.

What you need to do is to run chkdsk /f (or /r) from Windows on the drive you installed Wubi. If you installed on the C:\ drive this will require a full restart.

To run chkdsk on Windows 7 (the first checkbox corresponds to chkdsk /f and the second to chkdsk /r: 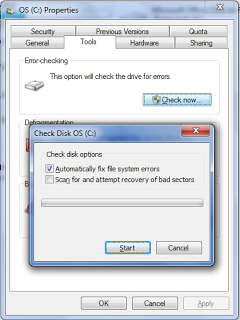 If prompted, restart the computer and boot into Windows to complete the chkdsk making sure not to 'Hit a key' to abort it.

After that, check the ubuntu\disks\ directory to make sure the root.disk is still there. In some cases, the ubuntu\disks\ directory itself is no longer present. If either are missing, you need to look for them as chkdsk will often recover corrupted files/directories to hidden folders named \found.000, \found.001 etc. These are hidden and protected OS directories by default (Windows 7) so they won't show up in Explorer. I find it easiest just to use the Command prompt.

To do this, right-click on CMD.EXE and select "Run as administrator". Change to the drive the \ubuntu directory is located on, and search for the hidden \found.??? directories.

e.g. if the root.disk is missing, you're looking for a file > 5GB in size. If you know what size your install was it helps. In this case, it's 15GB

If the whole \ubuntu\disks directory is missing, you're looking for a directory named dir0000.chk, and inside that you'll find the correctly named root.disk and swap.disk, so you can just move the directory back in place:

Recovery isn't guaranteed in all cases depending on the extent of corruption. Note that the root.disk may be correctly in place before running chkdsk and then be removed after running it.

I had a similar problem, but it wasn't wubi. It was with a dual boot install of ubuntu. The following helped me:

Not the answer you're looking for? Browse other questions tagged 12.04 wubi startup grubrescue or ask your own question.