I am trying to create a dual boot of Ubuntu 10.10 with Windows 7. My hard disk allocation were as follows:

After installation is complete, instead of getting the boot screen of Ubuntu, it directly boots from windows 7 without asking anything.

What is wrong? I run the Live Cd again using USB drive and I see that the \boot, and \ are occupied with most likely Ubuntu data.

Follow the steps below to install GRUB from a live CD it needs to be installed into the Master Boot record of the partition with Ubuntu installed. 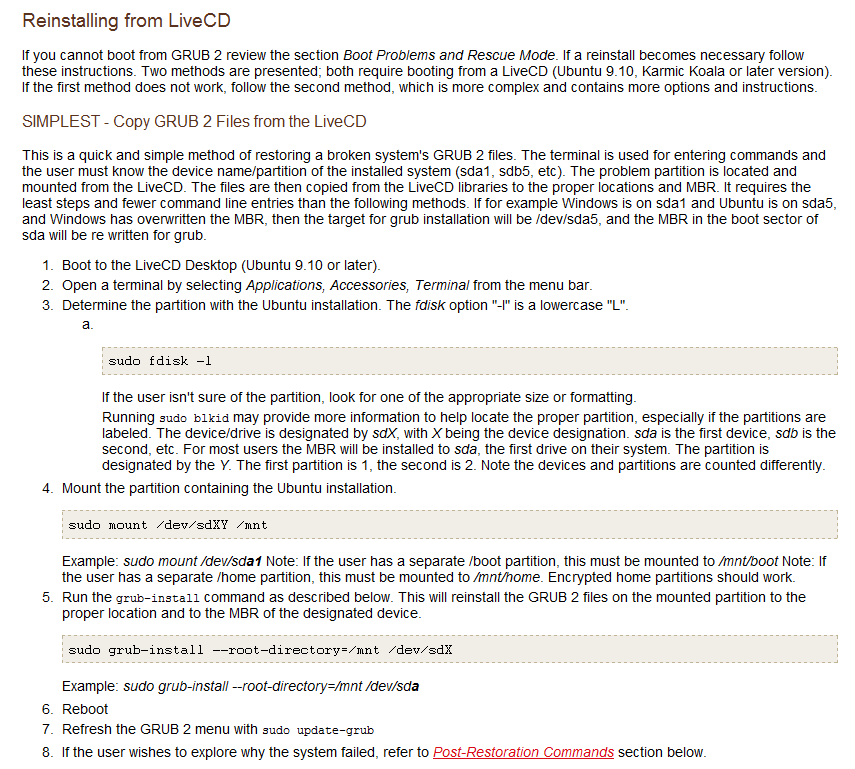 Where did you install GRUB to? You should be able to recover the installation if you re-install GRUB correctly see here.

I also recommend you read through the Community Documentation here - it should give you enough guidance to recover the installation.

A easy GUI way is to Download Grub Customizer Portable and then right click properties -> permissions and tick allow excecuting and then run it by double-clicking it and then go to File -> Install to MBR.

It's not uncommon for this to happen on a dual-boot system (with Windows wiping out Linux/Ubuntu or vice versa) but recovery can still be a bit touchy.
If you can get into Ubuntu via the live CD and mount your existing install, you should be able to run grub-install and have your boot partitions rediscovered. A more complete description of options is here . You should at least be able to verify that your Ubuntu install is present.

Here's the relevant community wiki for Reinstalling from LiveCD.

Not the answer you're looking for?Browse other questions tagged installation grub2 dual-boot windows-7 or ask your own question.

3
How to make Grub display after installing Ubuntu on a laptop with Windows OS?
1
Dual-boot Windows 7 + Ubuntu,Should I remove FAT32 partition
1
How to upgrade Ubuntu 12.04 in a dual-boot system with 13.10 CD?
3
Can't install Windows as dual boot after Ubuntu
0
Ubuntu 16.04 and Windows 7 dual boot problems