How to get bearable 2D and 3D performance on AMD Radeon HD 6950?

I have had an AMD Radeon HD 6950 (i.e., Cayman series) for a couple years now, and I have tried a lot of combinations of drivers and settings with terrible results. I'm completely at a loss as to how to proceed. The open source driver has much better 2D performance, but it offloads all OpenGL rendering to the CPU.

I feel I must be missing something absolutely fundamental here. Is there no accelerated support for anything on 64-bit architectures? Does a dual monitor completely mess up the driver?

I am currently using the open source driver, with the following results:

My /var/log/Xorg.0.log after upgrading to AMD Catalyst 13.1. Some possibly important lines:

The generated xorg.conf. The disabled "monitor" 0-DFP9 is actually an A/V receiver, which sometimes confuses the monitor drivers when turned on/off (but not in Windows). All three "monitor" devices are connected with HDMI.

Edit: Chris Carter's suggestion to use the xorg-edgers PPA (Catalyst 13.1) resulted in some improvement, but still pretty bad performance overall:

Having spent an age experimenting between fglrx proprietary drivers and AMD Catalyst drivers this has been one ppa I have no hesitation in adding. 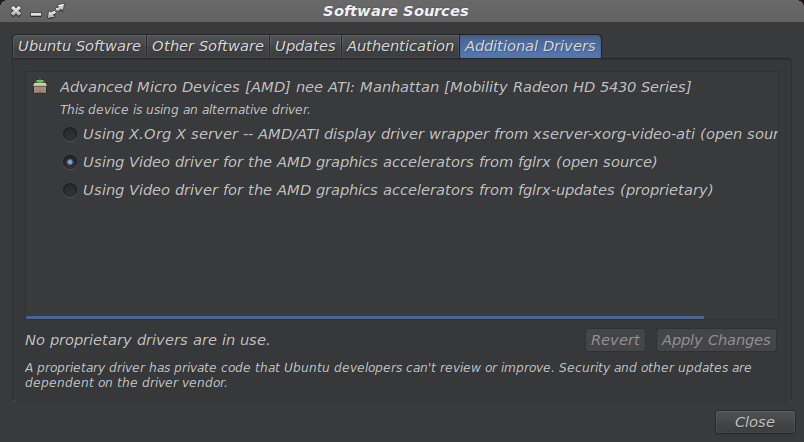 One thing you may wish to do is COMPLETLY removal of fglrx drivers. Up to manual removal of any files that could be omitted.

Than installation of Mesa drivers (so you have anything more than VESA mode :P ).

And then fresh installation of drivers.

PS Do you have hybrid graphics under Windows? (That may mean special drivers from OEM)

There is AMD Catalyst 12.12, released today that you can try, http://support.amd.com/us/gpudownload/embedded/Pages/embedded_linux.aspx It specifically fixes issues with X.Org 1.13.