How do I install Guest Additions in a VirtualBox VM?

I started up my Ubuntu guest OS, clicked "Devices" and chose "Install Guest Additions". Nothing happened, and I don't see the CD icon on my desktop.

How can I make this work?

If you have trouble installing Ubuntu in a VirtualBox VM, because the installer window does not fit the low resolution screen size, you can move the window with Alt+F7.

Installing Guest additions from the repositories

Alternatively we can install the package virtualbox-guest-additions-iso in the host Ubuntu.

The .iso file with an image of the OSE edition of the guest additions CD will install in the host directory /usr/share/virtualbox/VBoxGuestAdditions.iso. Mount this .iso file as a CD in your virtual machine's settings. In the guest you will then have access to a CD-ROM with the installer.

In case the Guest Additions fail to build we may have to install the Linux kernel headers (see How do I install kernel header files?) or build-essential

tools in addition. It is also recommended to have dkms

installed (see below - Note 4). You can run this command in a terminal to install both:

Selecting Devices -> Install Guest Additions (or press Host+D from the Virtual Box Manager) the Guest Additions CD .iso will be loaded but not installed in your guest OS. To install we need to run the installer script VBoxLinuxAdditions.run as root or from the Autorun Prompt (see below).

To install the Guest Additions we will have a CD icon on our desktop as soon as the virtual drive is mounted: 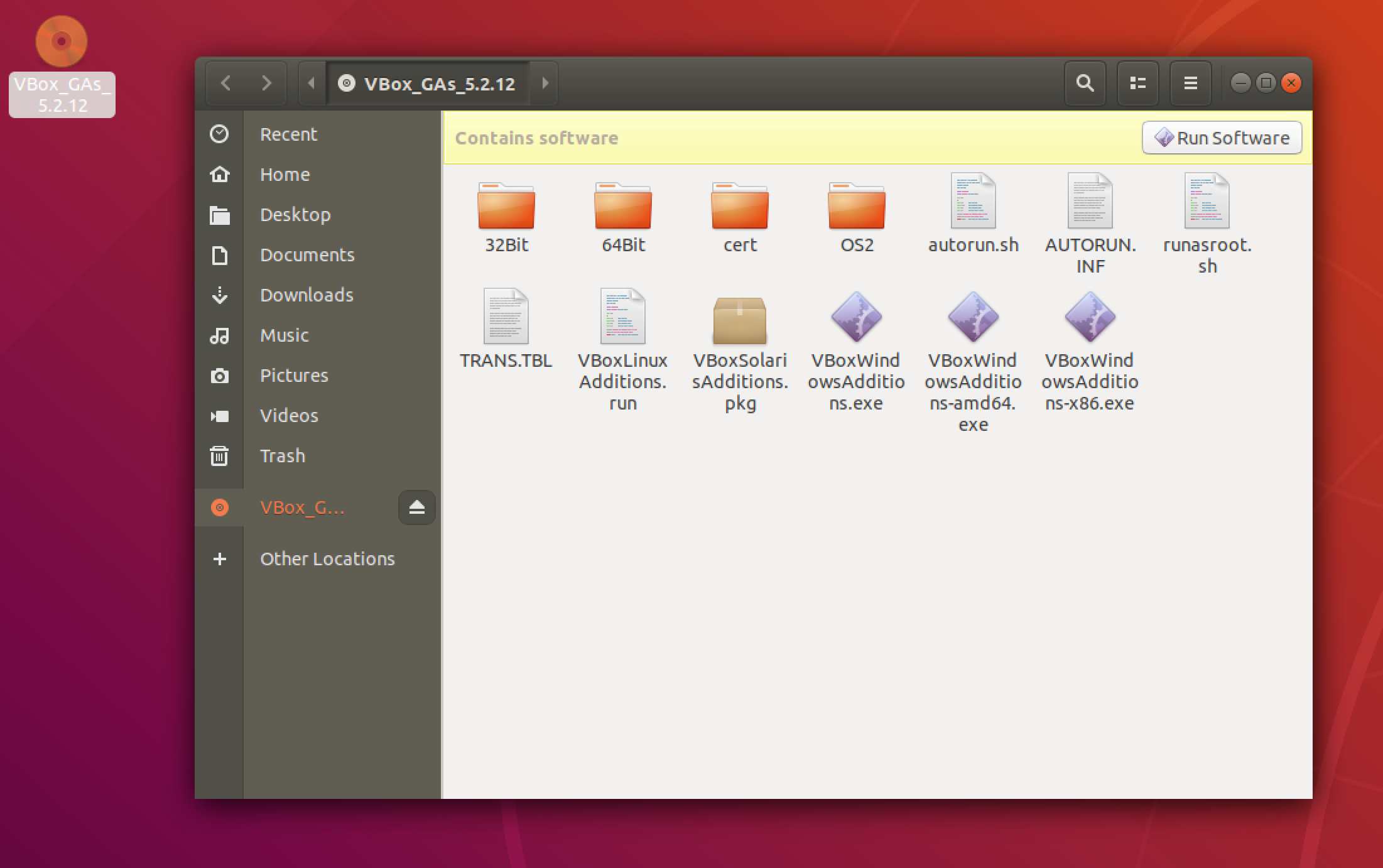 Next step is to run the autorun.sh script (as root) on this mounted CD by opening the drive and clicking on the "Run Software" button. This will build and install the vbox kernel modules needed.

The guest additions is mounted as a virtual CD visible on the launcher:

In case the system is set up to autorun a CD it should just open the following autorun dialogue (if not select the CD symbol, choose open, then choose Open Autorun Prompt)

After having entered your credentials for root access the guest additions will build as seen from the terminal output: 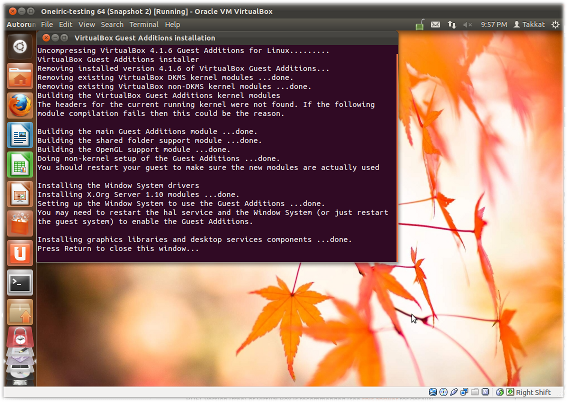 Press Return to close the terminal.

Note 1
Guest Additions need a reboot of your guest OS to take effect.

Note 3
In some systems (e.g. when running Xubuntu guests) we may not have an Autorun Prompt for the mounted CD. Then we can install the guest additions by opening a terminal on the mounted guest additions .iso to run sudo ./VBoxLinuxAdditions.run. In Lubuntu or Ubuntu Server guests we additionally need to install the GNU C compiler (gcc

utility in the guest system to be able to compile the guest additions.

Installing Guest Additions from a Terminal

In case Guest Additions are not installed properly we may not be able to boot to the GUI. In this case we need to boot holding the Shift key to access the Grub menu where we access a root shell as depicted in the following question (we do need to mount the filesystem read/write to proceed):

The Guest Additions .iso file needs to be installed on /dev/cdrom from the Virtual Box Manager (see above). We then may install Guest Additions by typing the following commands:

In case something went wrong with installing the guest additions, or the guest OS can not boot after installing we may have to remove the additions. This can also be done from a root shell by running an uninstallation script located in the guest /opt directory.

Replace x.x.xx with your current version of guest additions.

You could also try the following (this worked for me after I had to reinstall the Guest Addtitions after Update Manager killed them). Solution found here:

This found and updated the correct version of the VirtualBox Guest Additions and my system seems to work properly again, and I'm assuming this will also work if Guest Additions are failing to install from the menu item.

One other thing of note. I originally tried to run this under the fish shell - make sure you're using bash (i.e. type "bash" into the terminal before you start).

Note on more recent systems, the command has been changed to

Here are the manual steps to install VirtualBox Guest Additions kernel modules inside the VM:

To find the right version of ISO file, check it at: http://download.virtualbox.org/virtualbox/

If you're using Vagrant, installation is much simpler by following these commands:

The standard "virtualbox-guest-additions" package on the .iso provided by Oracle, has general tools for different Guest Operating Systems...

However, Ubuntu has its own dedicated Ubuntu-specific Guest Addon package(s)...
named virtualbox-ose-guest-dkms and ..-x11 and ..-utils .

These 'virtualbox-ose-guest-*' packages are DKMS aware.. "(DKMS is a framework designed to allow individual kernel modules to be upgraded without changing the whole kernel.)"

Here is the link to a question I asked 5-6 months ago on this issue... How can I get Compiz to work in a VirtualBox VM

Here are the steps I ran which finally worked, but as user named 'pcworld' stated above it may have been the case that only the last command was actually required. I'll never know, but I want to share in case this helps anyone else:

And don't forget to set your VirtualBox instance to use like 128MB video ram and Enable 3D Acceleration under the "Display" settings section for your instance, for good performance.

1) Install dkms. From the guest run:

3) Use blkid to identify the CD-ROM device. From the guest run:

One of the lines in the output should look like this:

The first part (/dev/sr0) is the name of the CD-ROM device.

4) Mount the CD (replace /dev/sr0 by the device name found above):

The procedure is quite simple.

The following popup will appear on your Ubuntu desktop :

Select Run and Guest Additions will automatically be installed.

I just did that and it worked.

I guess this won't get a lot of attention down here but at least if somebody searches for 20.04 they might be able to find some more recent information. ;)

The virtualbox-guest-additions package has to be installed. Furthermore, it may appear that nothing has happened, but all the "Install Guest Additions" button do is mounting the cdrom. You should open the File manager (Nautilus / Dolphin), select the "CD device" and run the installer.

If you have the guest additions .iso, mount it in VirtualBox via the guest OS settings. Then start the guest OS and run the vboxwindowsadditions-x86 or amd64 exe.

Find your version of Virtualbox and click the link to open it.

Open it in Archive manager and extract files.

This works if you can't open the iso file in VirtualBox (ISO9660 error).

user299272user299272
31
0
Add a comment  |
Highly active question. Earn 10 reputation (not counting the association bonus) in order to answer this question. The reputation requirement helps protect this question from spam and non-answer activity.

39
This system is currently not set up to build kernel modules. Please install the gcc make perl packages from your distribution
3
Installing Vbox Guest Additions in Ubuntu Server
3
Process to install Virtual Box Guest Additions Virtual Box
1
i am running windows 8 on oracle virtual box and unable to share between ubuntu and windows
0
Ubuntu VirtualBox display driver?
2
Ubuntu 14.04 - resolution stuck on 640x480 running in virtual box 4.3.10 ver on windows 7
1
How to maximize screen in virtual box?
0
Screen Resolution Problem with Ubuntu 14.04 and VirtualBox 5.0.10
0
Cannot insert guest addition cd image
1
Virtualbox: How can I get a usable screen resolution inside the Guest OS
See more linked questions