Ask Question
Asked 9 years ago
Active 7 years, 8 months ago
Viewed 11k times
12
votes
Locked. This question and its answers are locked because the question is off-topic but has historical significance. It is not currently accepting new answers or interactions.

Richard Stallman states that Ubuntu "has installed surveillance code".
See: Ubuntu Spyware -What to Do?

I agree with him that "Any excuse Canonical offers is inadequate....".

Depends on your point of view. The controversy is over the "unity shopping lens". The shopping lens lets you look for "things" right from your computer. So if you look for "candles" you will get results, even though it's not a file or app. You will be presented with a choice to buy candles.

The real problem isn't that this lens exists, stuff like this has existed for a long time, the problem is the dashboard includes the results by default. So when you press the super key and the dash in unity pops up you type "can" and you get some applications, some files, and some amazon search results. You can scope you search to just files, or just applications, but by default, you search for everything (including shopping results).

Canonical has stated that the results go to their server, are made "more" anonymous and then sent to amazon. With Canonical acting as a go between.

The truth is it's probably not a totally bad idea. It would be nice to press super, type Mountain Dew, and have someone bring me a cold can of caffeine. However, the implementation leaves a lot to be desired. Most notably that it's on by default. It smacks of evil marketing, and it is quite offensive to many Linux users.

The good news is that it's very easy to remove or turn off.

Personally, I have it turned off and everything works fine. I do find it very annoying that my OS had "ads" in them, but at the same time, I can see how, properly matured, it could be friggin' awesome.

Honestly, we will just have to wait and see how the general community plays out, and rather it's accepted as the first step to a more awesome feature or totally unacceptable data mining.

A few other things to keep in mind:

This article and the related ones may help you to decide.

I guess it depends on what you see as spyware.

When you type something on the dash, what you typed is sent to web to show you results related to what you typed. For example, if i type "Prince" i get a listing of available musics from Prince to buy.

Personally i don't see this as spyware (maybe "adware"?). The perception of spyware i have is of an application that sends information that you don't know and without your consent. Here i know what is sent, and i have means to disable it.

If you open the dash, on the right bottom corner, you can find a link named "Legal notice" where you can get more information on what is collected:

By searching in the dash you consent to:

Also to disable this feature, you can search on dash for "Privacy": 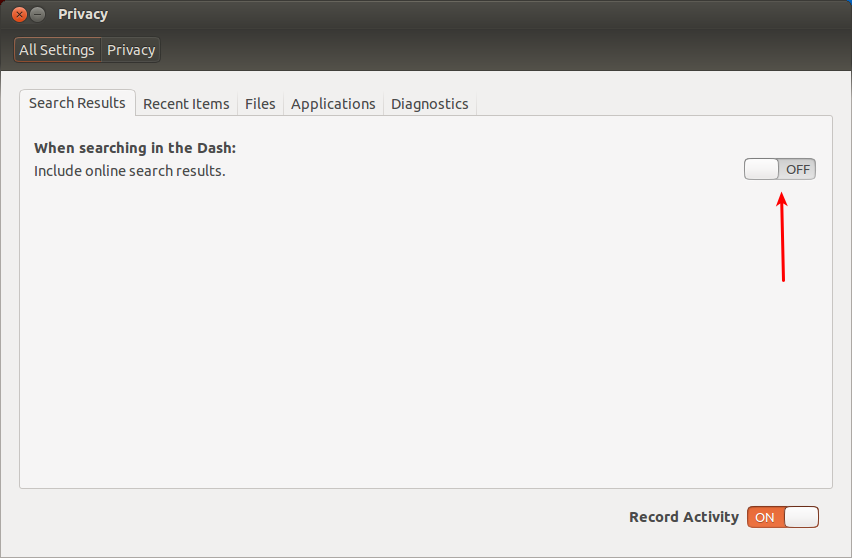 Not the answer you're looking for? Browse other questions tagged security or ask your own question.

-4
Is there spyware contained in 16.04?
1
Is Ubuntu spyware (referring to article by Richard Stallmann)?
271
How can I remove Amazon search results from the dash or disable the feature?
-6
Is the "Ubuntu Spyware" thing still relevant?
0
Will Ubuntu allow me to avoid "the cloud", and keep my stuff on my computer, not a stranger's?
1
How to get access to Search Results tab in Privacy Settings?
-1
Ubuntu 12.04 Spyware: What to Do?

5
Does Ubuntu come with a firewall by default?
2
Is making a clean install enough to remove potential malware?
9
Is there an application or method to log of data transfers?
1
Passively monitoring CPU activity
2
Are any Ubuntu (Linux) vulnerabilities in media applications?
1
Which Ubuntu Source file implements the management of the nx bit?
2
How to enable unhide in rkhunter
0
Is Ubuntu phoning home and is it sending data to Amazon?