How to create shortcuts to different Firefox profiles

I followed the instructions present here in order to use two Firefox profiles simultaneously. But I would like to make this process faster by starting each profile from its own shortcut. How do I create a shortcut to launch each profile?

You can use your menu launcher creator (or right click the desktop and select new launcher, depending on what desktop you are on) to fashion two new firefox launchers. The command you need for each launcher is, for example:

This will launch firefox with that profile and make sure that it doesn't connect to any other running instance of firefox with the essential -no-remote switch.

If you wanted to do it manually, the desktop shortcut would look something like this; you could create it in a text-editor and name it firefox2.desktop:

Something else I recommend is going to your firefox folder ( mine is /home/mike/.mozilla/firefox) and checking that the StartWithLastProfile setting in profiles.ini is false:

This is because it can get confusing if you are using different profiles and you start firefox as normal without using a special shortcut and it just loads the last profile used.

You can also get prompted each time for which profile to use by making sure 'don't ask at startup' is unchecked, which is in the firefox ProfileManager settings below. This setting is reached with

as noted in the question you referred to. 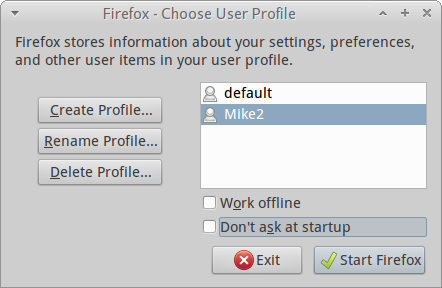 For more information on the command switches available for firefox see man firefox or the Ubuntu manpages online. Further support is available at mozilla.org.

I find this works: 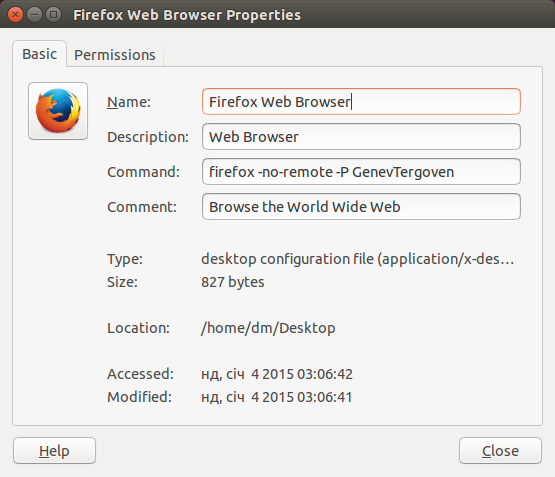 12
Firefox "clone" for Ubuntu
4
How can I run simultaneously two different firefox profiles
3
Installing multiple version of chrome & firefox on one ubuntu machine
0
Mozilla addons not working properly in ubuntu 12.04