Many screenshots within a limited time saved directly, without asking for a filename

I know how to take a screenshot, but I want to take many screenshots within a limited time (taking screenshots of a single execution of a program which I can not pause).

Is there a program that takes the "PrtScr" keyboard key in charge and just stores every screenshot without asking? The standard Ubuntu tool pops up a dialog to ask where I want to save the file, I would like a tool that doesn't ask and just saves on the Desktop or wherever as 00001.png 00002.png etc.

has an option to automatically save screenshots, incrementing the filename each time. 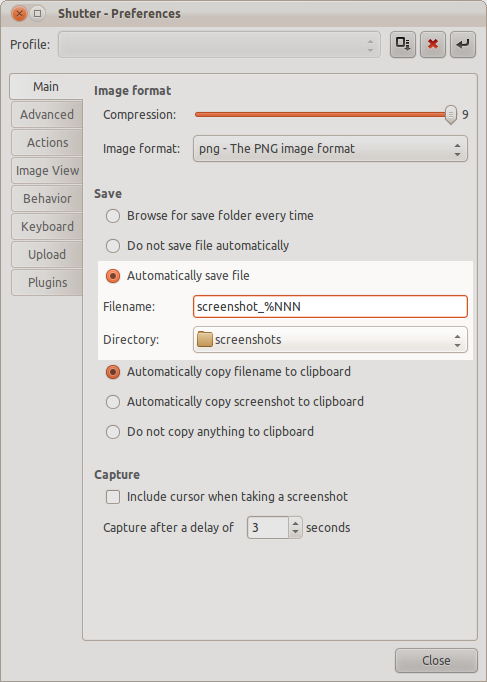 To make Shutter take the screenshots when you hit PrtScr,
go to Edit ➜ Preferences ➜ Keyboard and check the Capture checkbox: 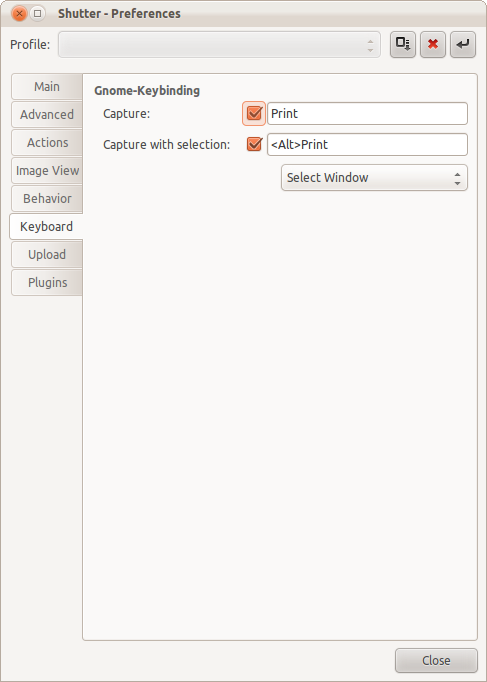 If you don't want the Shutter window to pop up every time you take a screenshot, go to Edit ➜ Preferences ➜ Behavior and uncheck Present main window after taking a screenshot : 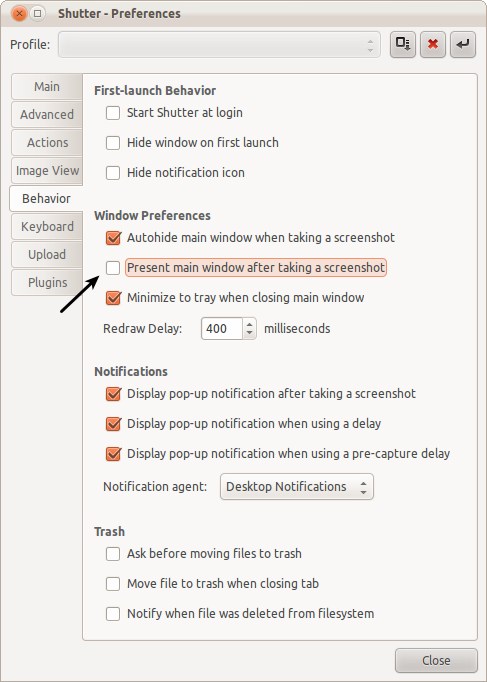 For fully automatic screen captures I found that scrot works perfectly, both for full screen captures, and capturing the current window (via the -u option), as described here: http://www.khattam.info/save-screenshots-in-ubuntu-automatically-when-printscreen-key-is-pressed-2009-05-12.html The only (very minor) issue I saw with scrot is that it cannot take more than one screen shot per second. But since it seems to take longer than a second to complete a screen capture anyway, this doesn't seem like much of an issue.

I enabled scrot (after installing it via Synaptic Package Manager) by changing my <Print> and <Alt><Print> hotkey bindings to do full screen and current window captures (respectively) and it works perfectly, as described here: How can I restore default keyboard shortcuts? In gconf-editor I set them to save to the /tmp directory by specifying these associations under apps->metacity->global_keybindings:

and these associations under apps->metacity->keybinding_commands:

I did not have to restart anything for these changes to take effect.

As for scrot - in order to take screenshots more frequent then one per second I suggest using the following command bound with Key Shortcut:

since scrot doesn't support %N as nanoseconds it is quite good workarround.

Note that, here in example nanoseconds were shrinked into miliseconds using first 3 digits from nanoseconds pattern expression: %3N. Local variable $TMPSCRN was used because string manipulation on shrot $f filename variable I found myself hard to implement yet impossible.

If you'd like to take the shots in .jpg format, you need to replace all occurances of .png with .jpg

49
How can I restore default keyboard shortcuts?

6
Taking screenshots of all (or specific) virtual desktops/workspaces (or: windows beyond/larger than current desktop)?
3
Quicker alternative to gnome-screenshot? (no animation!, quick!, no frills)
45
Screenshot selection in 22.04
1
Flameshot does not work properly on Ubuntu 22.04.1 LTS