I'm using Google Chrome as default web-browser because i need Flash ang i've installed Firefox back to use with Webapps, because Chromium, that i tried to use before, launched through script, taking Pepper Flash from Chrome, isn't working correctly: Webapps are crashing, clicking on their icons in Launcher or in Messaging menu does nothing and by clicking on web-links from the other applications, opens new clean Chromium window.

I've tried to fix it, and got only half-result as i'm telling here, so Chromium was purged, Google Chrome became default browser again and Firefox was installed for Webapps purposes.

I tried to change "Exec" string .local/share/applications/facebookfacebookcom.desktop to Exec=firefox 'http://facebook.com' %u and after that by clicking on Facebook's icon in Launcher Firefox started, but just once. After it's start, facebookfacebookcom.desktop rewrites with default "Exec" string and at the next time Google Chrome's new window opens.

Is there any way to tell webapp in what internet-browser it should start?

Upd. I tried to copy .desktop file from .local/share/applications/ and to change "Exec" string there. Firefox is launching correctly after that every time and opens second Facebook icon in Launcher :) So this desision also isn't acceptible.

I think not, but there is a feature request open about it.

Not exactly the answer you are looking for, but there is another way to launch a webapp —or standalone-dedicated internet browser window—.

1.- Launch chrome/chromium and open the page you want 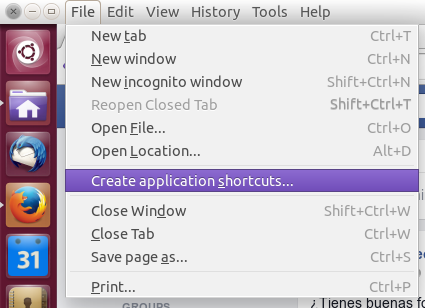 3.- Save only «Applications menu»

29
How can I set which application is launched by 'xdg-open'?

29
How can I set which application is launched by 'xdg-open'?
8
Do webapps only integrate with Firefox?
4
Is there any way by which I can make webapps open in a new tab instead of a new window?
2
Webapps don't open correctly when using Chromium
5
Are WebApps not working as intended?
4
ubuntu webapps create multiple icons when opened
8
Gmail Webapps and 13.10 - Unity and Message Me Menu Integration
0
How to create Facebook webapp?