How do I change which audio jacks are used for input and output?

I'm using a Realtek HD audio card built-in my motherboard. The Windows driver comes with a control panel that allows me to select which back panel jacks are used for what. So for example I can make both the blue jack and green jack for output and only the red one for mic-in. (Whereas by default, the blue jack is for line in, which I never need.)

How can I do the same under Linux? If possible, please don't suggest something that involves PulseAudio or JACK; I'd like to do it the plain way, e.g. by editing ALSA configuration files, if possible. The way I understand it, my problem should have nothing to do with software servers redirecting streams, just instructing the driver to treat this jack as so and so because it's hardware supported.

Thank you very much!

I managed to do it, but changes revert after rebooting. (Update: This can be worked around; see the bottom of this post.)

I did it via a GUI in python called HDA Analyzer that can be fetched and used from the ALSA website like the following:

Now this will make the GUI start, but its usage is not explained, and it's not exactly newbie-friendly. So to make life easier I'll explain how I did it. In my case, it was a matter of two clicks; the tricky part was locating exactly what needs to be clicked.

(Note: You may explore all the nodes one by one, but don't modify anything you don't understand. Any modification (e.g. ticking a checkbox) becomes effective immediately; there's no apply button.)

Now if you close the window, it will ask whether you want to revert changes. Saying yes reverts them immediately; saying no keeps them but only for this session.

If you want to keep your changes permanently, don't close HDA Analyzer yet. Instead, click "Exp" (Export) at the bottom-left and use Save As to write the python script to a file. Now copy that file to something like /etc/hda-mods.py and edit /etc/rc.local as root (e.g. using gksudo gedit /etc/rc.local) and add the line python /etc/hda-mods.py right before the exit 0 line, then save it and reboot. Your changes should survive.

Another gui tool might be hdajackretask from the alsa-tools-gui package. Very simple gui, supports boot override and advanced options. 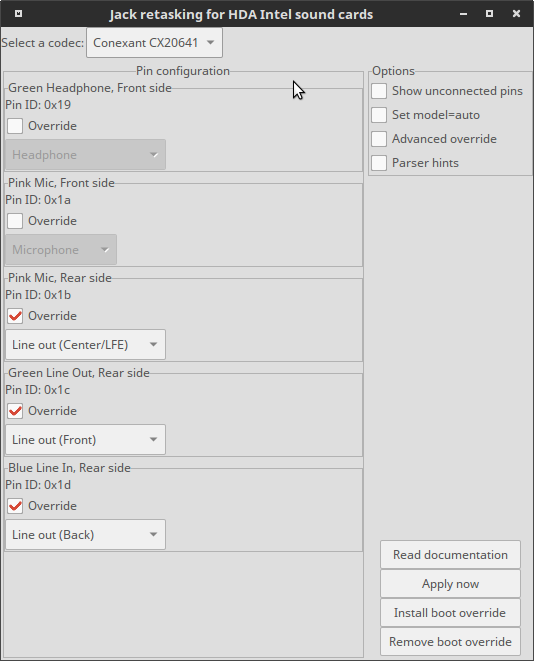 I hope I didn't misunderstand the question entirely. OP asked for non-JACK-options but I am pretty sure this might help someone else out. In my case, I had to check Advance override and Show unconnected pins and set an unconnected microphone input to a headphone output.. very weird, but works. Would love to see a cmd line solution though

0
Audio Input to Audio Output
14
Using microphone input port as headphone output
8
No sounds after upgrade
4
Sound From Speakers When Headphones connected
1
I want to use the blue jack as my headphones
-1
Python script to change the jack from input to output does not work in 13.04
1
How can I use line in jack for second pair of speakers?
0
Audio output to input
1
How do I map the audio motherboard jack to some other jack?
1
ThinkPad T440p docking station: no sound on external speakers
See more linked questions

8
Is there a way to control the JACK Output volume via terminal or get a PulseAudio Input?
1
How to connect external microphone to ASUS laptop with Combo jack
2
Headphone input missing 20.04
0
Bluetooth devices instantly getting disconnected or not providing audio
1
Sound not working on ubuntu 20.04