I have read plenty of threads on memory caching and the standard response of "large cache is good, it shouldn't effect performance", "the kernel knows best".

I have recently upgraded from 12.04 to 12.10 and changed from VirtualBox to VMware Workstation and the performance differences are severe (I suspect it is because of the latter).

When I am running my virtual machine the system load monitor graph shows less than 50% memory usage generally. 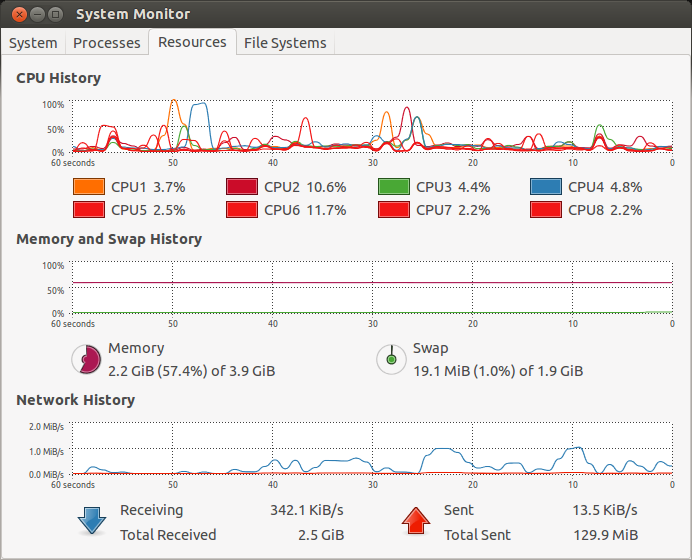 System load indicator is showing me that the rest of my RAM is used in the cache all the time.

Plain and simple this is the comparison:

So basically, any suggestions on how to take my performance back to how it was before while keeping my current setup?

My suspicion is VMWare is the problem, but how do I see what is tied to the use of the cache? Surely there is a way to control this behaviour in software as polished as VMware?

EDIT: Could also be important to note that the behaviour differs depending on whether VMware is open or closed. If VMware is open, then the ram will lock at like 50% and 50% cache and go into the complete lock up mentioned above. Contrastingly, if VMware is closed (after being open), then the RAM will continue to rise as it needs / cache will stay as the complete remaining memory and there is no noticeable performance degradation.

EDIT2: I have swapped my swappiness to 5 as suggested, no change whatsoever (also had the same problems with swappiness of 10 and 60 prior to posting this question). On closer examination, there is something really messed up. System monitor (and confirmed with the terminal commands suggested - free -m namely) are showing the following:

Which says that only ~ 1GB of my RAM is being used and ~3GB is in disk cache BUT my VM IS running and IS allocated 1.5GB of RAM. There was NO increase in my used RAM when I loaded the VM, but the cache jumped. System monitor (was confirmed with ps -aux) does show that vmware has a correct sounding 1.8GB of RAM but obviously free -m is showing otherwise. The results also suggest otherwise as my system struggled to even open this chrome page to post the reply (I only have vmware workstation and terminal open). Its like the memory isn't being declared correctly as RAM memory usage (as opposed to cache) and then the kernel obviously isn't responding properly based on that? Like its trying to release the cache memory as required like its supposed to but it can't because its in fact used memory / not cache.

I am just spitballing here now, really looking for some help about how to get to the bottom of this. Any idea whatsoever on finding out what is going on? Is there a way to confirm this is a VMware problem and not a Ubuntu one?

Set swappiness to 0 is NOT recommended in Production environment, especially for a host that runs multiple virtual machines. I've seen weird issues on servers and my own workstations, with swappiness set to 0, changing it to 5 or higher value makes it normal again, just don't set it to zero, unless you are 100% sure what you are doing and the consequence, workaround.

I don't trust the GNOME System Monitor. Normally use free, vmstat or dstat.

Have you tried to check VMware Workstation known issues? Make sure you run the latest version: 9.0.1?

The solution ended up being resolved with future kernel updates. For the record, the offending kernel which caused this problem was 3.5.0-17-generic

Not the answer you're looking for? Browse other questions tagged 12.10 vmware memory ram or ask your own question.

1
Error 12 - creating hibernation image - not enough free memory
4
Conky show RAM without buffers or cache
0
Poor performance for VMWare workstation 8.0 with Ubuntu 12.04 on ThinkPad w530
1
Ubuntu 14.04 does not see all of my RAM
3
Why is swap being used even if swapiness is set to 1, and a lot of RAM is free?
1
how to improve Ubuntu 19.04 desktop performance on VMWare workstation?
3
Downsides to disabling/removing swap?
0
Ubuntu Swappiness Default Confusion