How do I add a user to the "sudo" group?

In /etc/sudoers I see this:

So how do I add a user to that sudo group?

The a is very important. Without it they'll be removed from all other groups. You will need to either restart your shell/terminal or log out and back in for this to take effect.

You can either use the user management GUI for it (same place where you create users), or use sudo adduser <username> sudo in the command line.

You can also use a graphical interface. Click on the gear on the top right of the panel, then select "System Settings" and then "User Accounts" 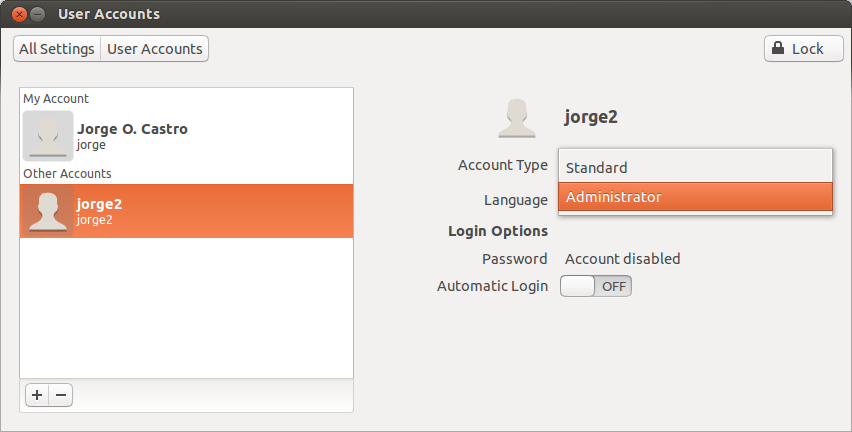 Its really simple if you are using Unity as your desktop environment.

If you have created a user already then you can simply change it from Standard to Administrator, else make sure that you selected Administrator when creating a new one.

Don't forget to unlock before trying to change it

I am late to the party, but this answer might help someone that uses Ubuntu inside a Docker container.

I recently created a Docker container based on Ubuntu 16.04.1.

By default, the Docker Ubuntu image is a stripped down version of Ubuntu, which does not have a vast majority of common tools including sudo.

Besides, by default, the user is logged in to the Docker container as root.

Therefore, I started the container with the docker run command, and installed the 'sudo' package:

Running the command adduser myuser sudo reported error adduser: The user 'myuser' does not exist.. After reading this answer, I first ran the command to create the user:

Then ran the following command:

The user myuser was successfully added to the sudo group.

Here's how I setup a non-root user with the base image of ubuntu:18.04:

What happens with the above code:

Use usermod. Add the sudo permission with the following command:

Please note that you'll have to use the root account to do this or use another account that has sudo permissions. If you don't have access to another account for some reason and you don't know the root password, you'll need an Ubuntu (or another Linux distro) live CD and then you'll need to chroot into your Ubuntu filesystem and run the above command from inside the chroot.

43
How do I add myself into the sudoers group?
0
No root privileges - how do I add a user to the sudo list?
2
Can I have a user execute sudo commands without being an administrator?
0
Give user FULL permissions to all files without setting group to "root"
1
User is not in the sudoers file.The incident will be reported
1
Root user access for another user
1
How to add new user in ubuntu core in sudoer file?
1
How to create new user with sudo access
0
How can I add an account to the sudo list?
0
How add user a sudo group
See more linked questions

209
Sudoers file, enable NOPASSWD for user, all commands
4
How to add flags and/or arguments to a command in the 'sudoers' file
1
Editing /etc/sudoers to allow Winbind Group members to Only sudo to 1 Local User
3
User in admin group still being prompted for password to sudo
1
User account in sysadm group even though it isn't
2
how should `id` and `/etc/group` be read?
2
Why system keep ask to enter password for the first member of sudo group instead of deny command execution
5
Edit Sudoers file to allow sudo rights to a AD domain group
3
Can't add group to user