How to compile deskew plugin for Gimp?

I'm interesting in using this Deskew plugin which appears somewhat old, with broken links in the gimp registry.

How do I go about installing it on Ubuntu 64-bit 12.10 running Gimp 2.8? I can't figure what I have to "configure" or "make" to compile the plugin. I understand the end result should be placed

Noob-level: I know how to get around in a terminal, but that's about it.

Here is how to compile the deskew plugin for Gimp. It is largely trouble free, but I will note certain important things as I go along. This should work across all Gimp 2.x versions; it has been tested successfully on Gimp versions 2.6 and 2.8.

Firstly, you need the Gimp development files, and the most important one is libgimp2.0-dev as it contains the header files necessary for compiling plugins for gimp.

I already had the other gimp development files installed, as I had run sudo apt-get build-dep gimp, but you shouldn't need them for this one plugin.

Now pull the code from git with:

Then cd to the gimp-deskew-plugin folder and run

I would normally specify --prefix=/usr here, as we don't want the plugin installed in /usr/local, however it doesn't install correctly in the /usr hierarchy, but I will explain how to overcome that later.

Now, run make and the plugin executable is compiled in a few seconds.

As running sudo make install doesn't quite get it to where we want it (even with specifying a prefix earlier), it is necessary in this case to manually copy the one executable to the Gimp plugins folder:

Cd to ~/gimp-deskew-plugin/src and run

The plugin is now accessible from Gimp > Layer > Transform > Deskew. 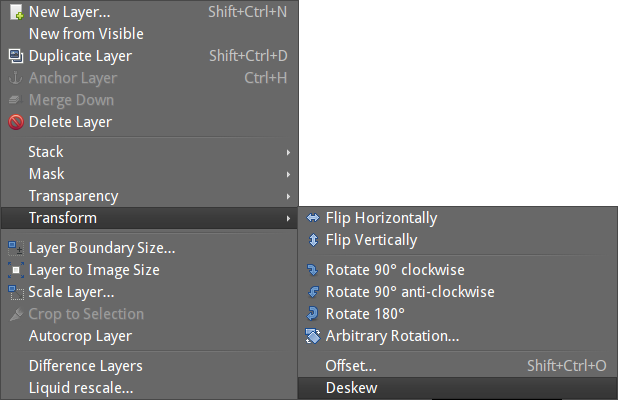 Just a heads up. I fixed this in the Git repo and moved the repo over here:

Not the answer you're looking for? Browse other questions tagged compiling gimp or ask your own question.

9
how to install webp plugin for gimp?