An application asks to unlock the keyring on startup, but it doesn't say which one

A couple of weeks ago a popup has appeared whenever I startup telling me that an application wants to access the keyring but it doesn't say which one. I'm used to seeing the application name on the popup but here it just says 'application'.

I haven't changed any passwords or did anything that might have something to do with that, to my knowledge.

I saw this question but like I said, I haven't changed any of my passwords, and I don't want my keyring password to be empty.

How can I find out which application is asking to unlock the keyring and fix it? 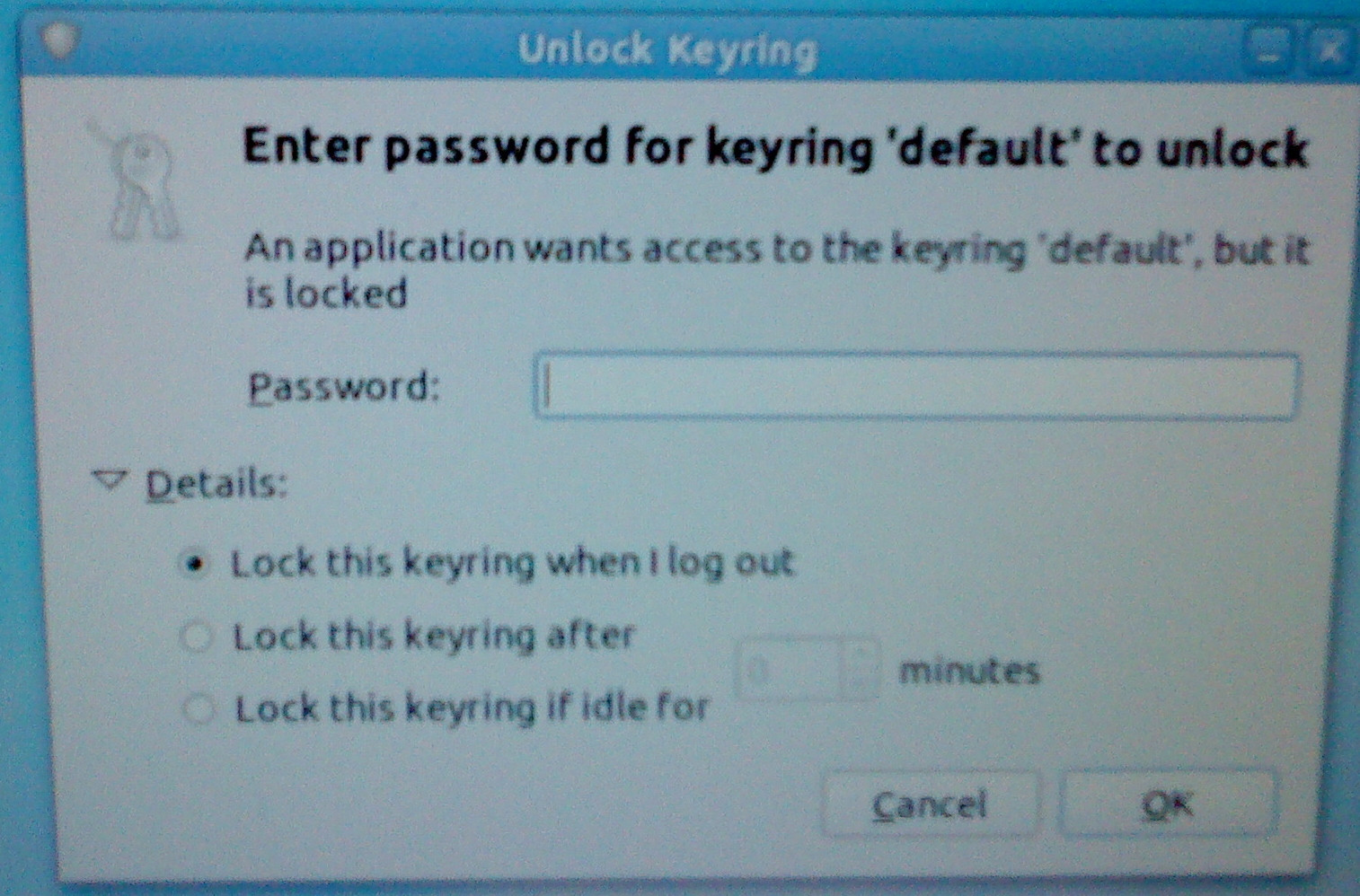 I setup my box for auto-login and it does this on every login. In my case it's nm-applet/network-manager family of apps.

edit:
btw the problem has been around for some time, evidently some half-fix got undone during a package upgrade, but i digress...one solution is here

and the "bugs" on bugzilla are probably being continually given priority of low because it's only for autologin users. it doesn't happen "out of the box" only due to customization. just trying to help you understand why it seems like the devs don't care. it's not a coding problem, it's...well...something else.

proof video that it is nm-applet is here

and the reason it freezes the menu system is not because of gksudo, it's because it's an applet trying to start that grabs the tray and locks the menu-system. at least in my case you can still launch icons on the desktop. try putting a shortcut to a terminal there if you really must go mucking about with the prompt there.

From a security perspective, the answer is that in current distros (not just Ubuntu) you can't tell which application it is. See https://bugzilla.gnome.org/show_bug.cgi?id=574315#c4 for clarification from a gnome-keyring developer, including the security implications and scope of the task. See also http://live.gnome.org/GnomeKeyring/SecurityPhilosophy

(From a practical perspective I am also using auto-login on Ubuntu, and it seems that it is indeed nm-applet.)

None of them have a suitable answer, which leads me to believe there is no way to find out what application is asking you to unlock the keyring.

Is it possible that you've changed your password recently?

In order to see what passwords are stored in your keyring, go to "Passwords and Encryption Keys" in system -> preferences (I think - I always uninstall it as a security risk).

In that application (called Seahorse by the way), click on the "Login" keychain and either change the password on that to match your current password, or remove the password from that keychain altogether by changing it to a blank password (you'll get a warning about using "unsafe storage").

Okay, Goto Your Home folder Places > Home Folder And Press CTRL-H to show hidden files then navigate to .gnome2/keyrings. Look at default.keyring. If it is there or there is some sort of file called 'default' then Look at it and that is the app causing you all this issue.

You could, alternatively delete your keyring folder and Restart. That should get rid of the Password box. It will not break anything as It recreates itself using default settings :)

Run System Monitor from System - Administration and check which application is throwing the prompt.

Hi The key ring dialog pops up whenever ubuntu finds a wireless network.It is utility to save your secret network credentials like password etc.You can change the settings from system> Administration> Keyring manager.(I think you can find the manager here)(I don't remember the exact location sorry)

4
Knowing which application tries to unlock a GNOME Keyring
382
How can I stop being prompted to unlock the 'default' keyring on boot?
1
When I create an account without password, Ubuntu still asks for it!
2
how do I know what process requires the keyring to be unlocked

382
How can I stop being prompted to unlock the 'default' keyring on boot?
1
How do I prevent having to log in on 3 separate prompts every time I start my machine?
1
How do I make Empathy match my keyring with my password?
2
Saving Keyring Password
2
Password manager does not trigger with Chromium when it should
1
Broken configuration for seahorse-ssh-askpass
13
What could be the reason, that private keys are not unlocked?