Which driver should I choose?

Here is what they offer me. I've heard that Nvidia has released new drivers few days ago and I don't know which they are. I tried installing them with .run file but I can't.

I recommend first activating the Proposed, Restricted, Multiverse, Universe and all other repositories. It should look something like this (Open software sources first to activate them. Them do a sudo apt-get update):

After you update and reboot (If an update asks you to) you should see the Nvidia drivers like this: 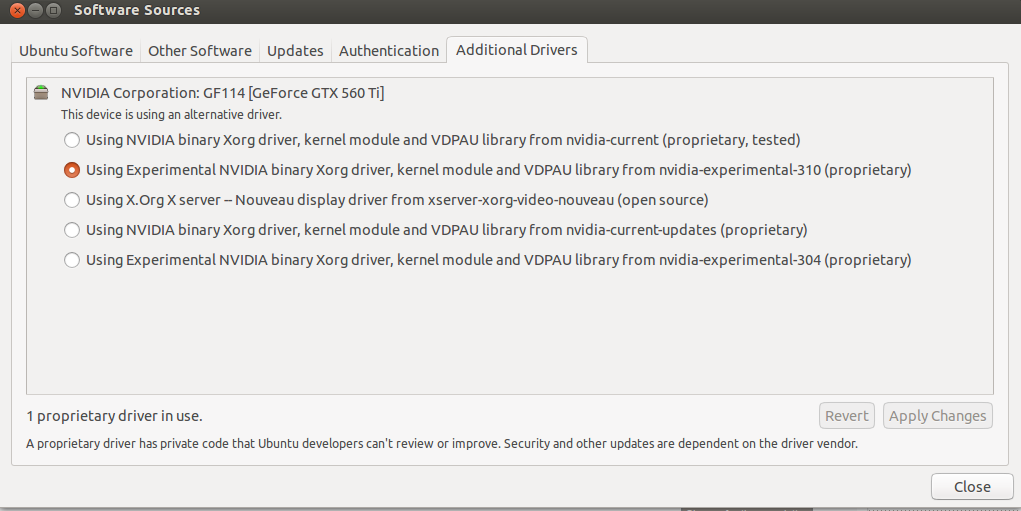 And that's when I come in ^^ to explain the 5 types of options:

There are 3 types of Nvidia versions:

Depending if "you feel lucky punk!" you can go with Nouveau which works well in most cases but is not recommended if you want to start testing out Windows Games with Wine or Ubuntu games that use extensive OpenGL.

You then have the Tested Proprietary drivers (Right now is the 304.xx versions). This will work stable and give you considerable more FPS for your card than Nouveau. The Nvidia update you mention on your question might be the 304.64 which comes with many Linux fixes.

Lastly you have the Experimental Proprietary drivers (Right now the 310.xx versions). This will work good in most cases (Using them right now and they work perfectly). There was another update to the 310.xx series, the 310.14 which brings a considerably higher performance. You should feel the change when playing L4D2 or see it with unity on how fast Dash and other Compiz features react.

UPDATE: The latest drivers are the 313.xx series which have a huge boost in performance compared to the others mentioned here.

Depending on which one you want, you can go with Open Source Nouveau, Proprietary Tested one or the Experimental one. Note only that both Proprietary are more recommended for latest Nvidia cards (Series 6000 and above). Nouveau is more general in that regards.

Another good question would be: But why so many options now?

This is because there is good moves right now between Valve, Canonical and Nvidia (Mainly them if you have followed the trends, news and others Canonical sites) for bringing Games to Linux (The right way). What this means right now is:

The proprietary drivers are developed by nVidia. Generally speaking, they will support the full functionality of the card; however, since the driver is not open source, if there are issues, the community may not be able to determine the cause of any problem.

Most people would probably say you should use the tested proprietary driver (the first one on your screen shot) to get the best results. This has been tested outside of nVidia to verify its functionality. The third driver listed is the most current official stable release from nVidia, but it hasn't been formally tested by others to verify its functionality - it's probably safe though. Additionally, the 304 driver (the last one on your screen shot) has been found to be generally pretty stable and provide a decent performance boost. You would want that driver if you plan on using the Steam for Linux beta.

If you don't feel the need to live on the bleeding edge and don't plan on doing any gaming, the first or third driver on your list are probably the best bets. Oh, and you aren't bound by any of these choices. You can change your mind or try different ones out to find the one that gives you the best results. Just go back to Additional Drivers in System Settings later if you change your mind. Just an FYI, you will sometimes have to deactivate the current driver first to be able to activate a new driver.

Not the answer you're looking for? Browse other questions tagged nvidia 12.10 or ask your own question.