There are many questions about resolution issues on askubuntu but no question/solution seems to solve my issue.

I want to run the guest in 1920x1080 (16:9) so I can easily record screencasts in "full-hd". Last time I had this problem the solution was to run "VBoxManage controlvm nameofyourVM setvideomodehint width height colordepth" command from the host but now I want to know if there is any easier way to solve this?

Reset to default
29
Share
Improve this answer
edited Apr 6 at 5:57

Further modification to the answers from @sangsoo-kim and @wery-nguyen for more clarity and improved utility:

Now start the VM and you'll be able to resize the host container window to any dimensions you want, and the VM will automatically adjust!

p.s. You can also do this while the Windows VM is running, if that doesn't work, restart the VM after making the change.

Edit Aug 22, 2018 -- you may also have to twiddle with the Adjust Windows Size and Auto-resize Guest Display items on the VirtualBox View app menu to get resize working correctly. 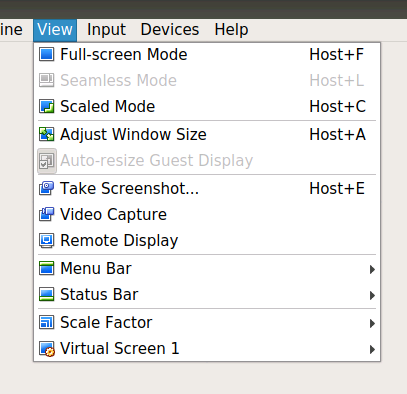 Just install Virtualbox Guests Additions but before be sure you have DKMS in terminal:

after this install guests additons,restart pc and you got the right screen ratio.

(8 years later) this worked for me

then go to display settings and you should find it

I faced the same problem with KDE neon as host and Ubuntu 20.04 a guest.

I changed the machine setting in the Virtual Box Manager, Display tab.

Instead of using VMSVGA (I do not know how this setting was set) I put VBoxSVGA. This worked for me.

This is based on the answer of @Sangsoo Kim which works well for me:

I tried a lot, but just changing the graphics settings/graphics controller in the host machine's options from VMSVGA to VBOXSVGA started the Ubuntu VirtualBox immediately in the right resolution for me, i.e. 1920x1080.

This fixed it for me.

I know there has benn a long time since last activity in this thread but this helped me and is thanks to you. In my case the tools where already installed.

Running linux 18 on VirtualBox 6.1, I tried several things here. This is what worked for me

In applications, open Displays -> Click Resolution (now I had to drag the window, because it couldn't display the various resolution options) -> Choose a different setting (long list to choose from) and press Apply.

TLDR: If you have 2 monitors, move the vm window to the second monitor, alter resolution in the vm, then move it back.

If you google this issue, there are a lot of threads with the same symptom, all with different solutions. It's clear that this is a symptom that can be caused by multiple root causes. I had multiple Linux Distros (Ubuntu 20.04, 21.04 and 21.10, Debian 10 and 11, and Manjaro) as vms that could not display 1080p resolution , but could display 4:3, 16:10 and lesser 16:9 resolutions. Both of my monitors are maximum 1920x1080, so that should be the obvious inherited resolution of the guest.

This problem occurred both in virtualbox and vmware player... I moved my vm to my second monitor, noticing that after doing so I was able to full screen the vm and set resolution to 1080p. I was then able to move the vm back to my primary monitor, retaining the 1080p resolution. For some reason, something about my primary monitor is preventing guests from including 1920x1080 in the list of available resolutions, despite it being a 1080p monitor.

Since it happens on both vmware and virtualbox, its probably not obvious that its a bug in the virtualization software. That being said, if the host can detect my resolution on first boot of my newly formatted pc, the guest should be able to as well, and the logic for that detection would seem to be at fault. For my particular use case, its probably very hard to reproduce and thus not been debugged. Interestingly Fedora 34 got it right the first time, it was able to identify my correct resolution without me having to manually set it...

I too had the same issue. I installed dkms and then installed the Linux headers as per @Daniel answer. Then rebooted Ubuntu while remaining in full screen mode and it switched straight to the correct 16:9 resolution.

I had the same issue, but now it works. I had to install:

I have a working method. This will work for sure 100% . This method works in Oracle Virtual Box All you have to do is go to run command prompt as administrator Then type the following command- cd "C:\Program Files\Oracle\Virtualbox" After typing this command now you have to check what name have you given to your OS when creating a new Profile for OS in virtual box . for e.x. I want my MAC OS to full HD , i named my OS as MAC OS ,so the command will be- VBoxManage setextradata "MAC OS" VBoxInternal2/EfiGraphicsResolution 1920x1080 Only these two commands, just replace MAC OS with your OS name in virtualbox , just restart your virtual box and see the effect ;) thank me later.

I had to go to the display settings of ubuntu in the virtual machine and change the display resolution to 1920x1200. Worked fine in my case

For me , I couldn't get the Linux Mint window to display crystal clear without having the scrollbars showing lost screen space. When I selected the resize in the top right (2 square boxes that resize windows) to get everything to fit, the fonts on the screen turned fuzzy.

The answer was to select View > Full Screen Mode from the top menu after I got the warning box on startup about the switch mode. This puts a small hidden VBox menu at the top of the screen which is perfect. You can see "Full Screen Mode" on the picture of the menu in one of the posts above.

Not the answer you're looking for? Browse other questions tagged virtualbox resolution or ask your own question.

534
How do I install Guest Additions in a VirtualBox VM?

183
Higher screen resolution in VirtualBox?
3
Upgrading VirtualBox 3.2.10 breaks my guest Ubuntu screen resolution
2
Resizable screen mode for VirtualBox behaves strange with Ubuntu as guest
6
How do I get 2560x1440 resolution within VirtualBox on a Mac?
3
How to get Ubuntu VB guest to use monitor's native resolution?
5
Virtualbox hangs when shutting down after having installed guest editions
6
Experiencing small resolution issue in Ubuntu 14.04.2 with VirtualBox, getting stuck on installing guest additions