Desktop does not show when I installed nvidia drivers!

The desktop does not show after I installed nvidia experimental drivers. I tried nvidia simple proprietary drivers, and they did not work either.

Here is how it looks. This is not cropped or any thing. This is how it looks, after the installation of the drivers the desktop resolution decreased from 1440x900 to 1024x768 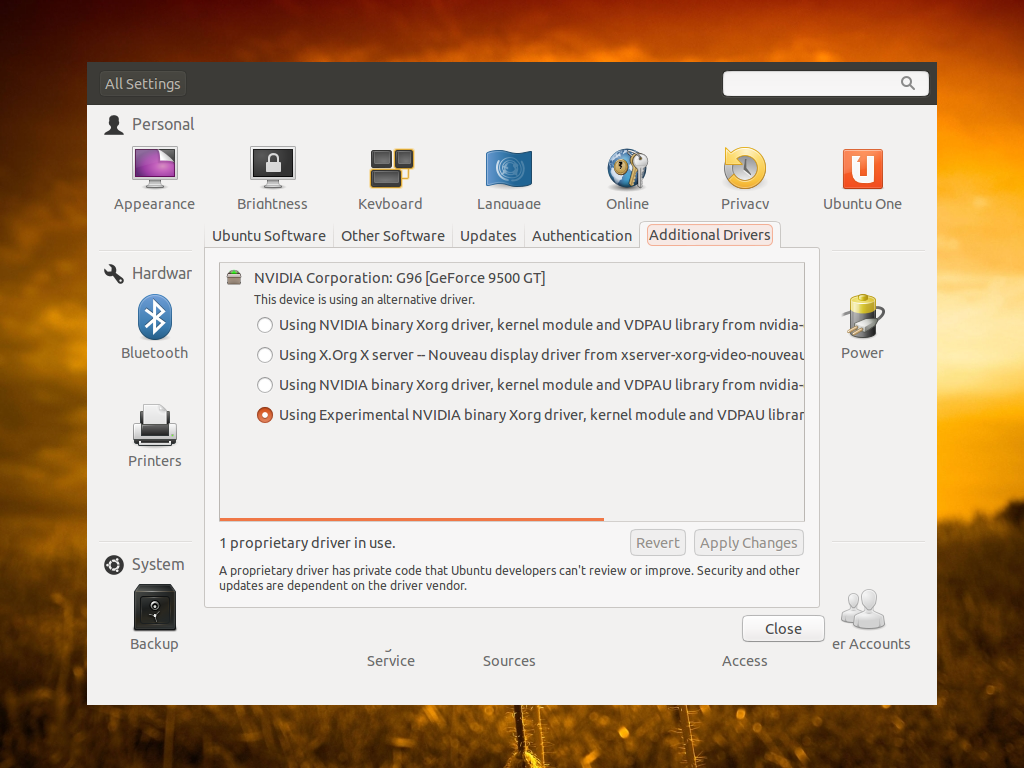 The desktop only shows desh and panels when I use the open source drivers.

Is there any way to fix this so I can get better performance?

I had the same thing happen. Here is how I fixed it:

This should allow the kernel module to compile and install properly. It did for me!

If desktop still don't show, it might cause from Nvidia Optimus graphic card. I have laptop with GT 650M and that's also a Optimus card. Optimus cards behaves a little differently and there is no Linux support for them by default. More info about Optimus in linux: http://ubuntuforums.org/showthread.php?t=1657660

But it's possible to get it working with Bumblebee. This is how I did it on fresh Ubuntu 12.10 installation (No nvidia drivers installed):

Then reboot or re-login.

It didn't work first when I left off that second command. Then to run something with graphic card type optirun before command. In example: optirun glxspheres or optirun ./executable-file. Good way to test the difference between integrated graphics and your graphic card is to run glxspheres with and without optirun.

This saves power when you activate your graphic card only when it's needed. I hope I helped someone, because I have spent hours to find out the problem with my graphics card (yup, I'm quite new with these Linux graphics drivers).

After meddling with this for a few evenings (disappearing unity desktop, 640x480 resolution only, weird artefacts on my screen) on my Geforce GT 630, this is what worked for me:

so far so good - I have the NVIDIA settings panel (without the Xconfig error message), dual monitors, and high resolution.

Special note: do NOT install the "additional drivers" package (Jockey). This package actually seems to disappear after step 2 (software updates) - the method for adding additional drivers seems to have moved to the "software sources" app.

I just installed Ubuntu 12.10 today, and had this issue with nvidia driver.

I tried to follow above instructions, but all these failed because of two words that are quite important: "generic" and "-17".

I eventually found that the best way of installing NVidia driver is to actually use installer privided by nvidia. So I went to:

Then you run the tool and it says you need kernel headers, however read carefully because it requires "generic" headers.

and after that you may run:

Installer will probably tell you that Noveau kernel module is loaded and will suggest adding modprobe script. You should say Ok/Yes to all whatever it tells you and then reboot and run NVIDIA-Linux-x86_64-310.19.run again.

Not sure if other approach would work as well, but this one does for sure.

This also works for the Nvidia 7400 cards. But if the kernel updates you must change the install line to the latest version now it is:

I tried almost everything, but here is the one that really worked for me:

then reset unity with this command:

reboot and Unity is back!! I hope it works for you.

I solved the problem tonight. I installed the latest Kernel 3.7.1 after compiling it like I always do. Then I installed the nVidia drivers from Synaptic. This caused the Unity menus to disappear like what you show in your screenshot. The solution for me is below:

Now not only is the problem solved by you have the very latest nVidia drivers!

If your install doesn't work (initial module not building), you have to make sure you only have one set of headers installed.

In this case, simply

Now, the nvidia installer will work.

Not the answer you're looking for? Browse other questions tagged nvidia kernel or ask your own question.

4
12.10 Unity GUI Not Displaying
2
Triple Monitor Issue, 12.10 64bit
0
ubuntu 12.10 - nvidia gtx 550 ti proprietary drivers issue
0
Ubuntu 12.10: black screen after installing nvidia-current
1
How to install NVIDIA driver in ubuntu 12.10?
0
Ubuntu 11.20 launcher disappeared after installing Nvidia Driver
1
after installing nvidia-current via jockey on 12.10 i only see my desktop but not the unity interface
296
How to fix "The system is running in low-graphics mode" error?
173
How do I install the Nvidia drivers?
11
Unity completely broken after upgrade to 12.10?
See more linked questions