How to find and change the screen DPI?

I am trying to find and then change the screen DPI (dots per inch) setting in 12.04 and 12.10. However, I can't seem to find any app or config file that can do this. Is there any app or conf file for this?

Note that this is for 12.04+ so the following will not work:

Moreover, they are basically changing the font size, not the actual screen DPI.

This is an updated version of my previous answer which was related to Ubuntu 12.04. In 16.04 (Xenial) 3 steps are needed to set DPI correctly instead of 2.

In 16.04 the outputs of all these 3 commands were consistent and were equal to 96. Though such consensus is better than the disorder of 12.04, the reported value is hardcoded and far from the real DPI value.

Be warned, the manual method of measuring may be more accurate, than the output of the command xrandr | grep -w connected because the newer versions of X server ignore the size reported by EDID and calculate the size using the screen resolution and a hardcoded value of DPI (more info here).
Another method how to find the size of the monitor is to read its EDID directly. Install read-edid package and run the command sudo get-edid | parse-edid | grep DisplaySize in the terminal. Its output will give you the actual size of your monitor in millimetres. If not - use the ruler.

1) In 12.04 run gksudo gedit, open /etc/lightdm/lightdm.conf and add a parameter under [SeatDefaults] section:

There's no such file in 16.04 by default, so you must create lightdm.conf manually and put it into /etc/lightdm/lightdm.conf.d/. The contents of this file are the same:

2) In my former answer I proposed to create a file in /etc/X11/Xsession.d/ containing string xrandr --dpi 90. This worked in 12.04, but in 16.04 this setting isn't persistent. In newer systems we can add the desired value on session start. Run "Startup Applications", press "Add" button, name it "Fix DPI" and set the command xrandr --dpi 90 in the field. Save the changes and re-login. Now xdpyinfo | grep dots will report 90x90 dots.

If xdpyinfo still shows 96 then add a timeout before running xrandr. Edit the command in "Startup Applications" and change it to:

Step 2 is optional for 12.04 because in older systems Step 1 fixes both Xorg.0.log and xdpyinfo values.

Changes will be applied at once. xrdb -query | grep dpi will report the desired Xft.dpi: 90.

P.S. There is another method to fix DPI setting which is much more difficult and it is described in this guide. I tried it also and the result was the same (at least in 12.04).

Afterword: Only Ubuntu developers can say for certain whether values modified by Steps 1 & 2 really matter in modern Ubuntu or they are silently ignored. Only Step 3 produces the changes which are instantly noticeable. Those users who consider that certain apps may still rely on X server settings are encouraged to perform all 3 steps described above. For the rest Step 3 is sufficient - that's the sole way of customization adopted in modern Ubuntu distros.

In the image below we can see the scaling it has at 0.75 on the fonts and title bars: 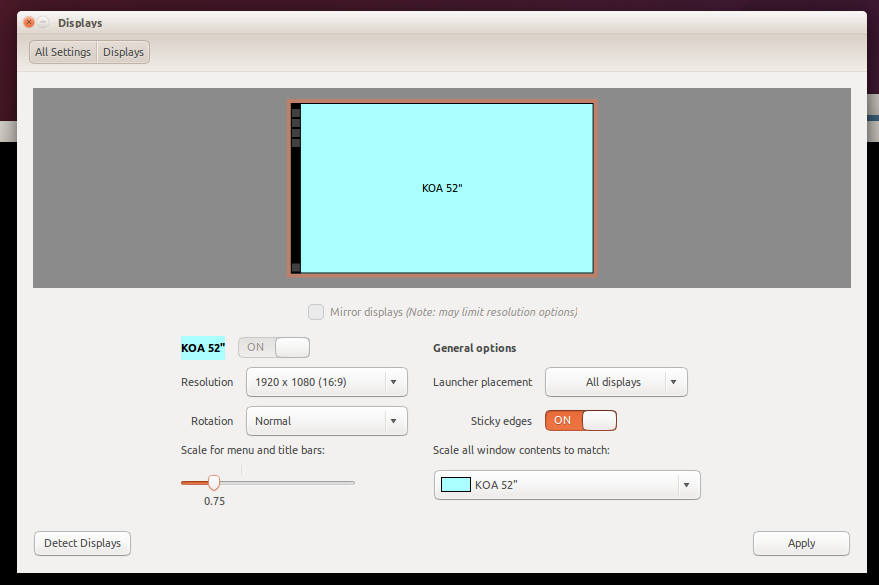 In the image below we can see the scaling it has at 1.38 on the fonts and title bars: 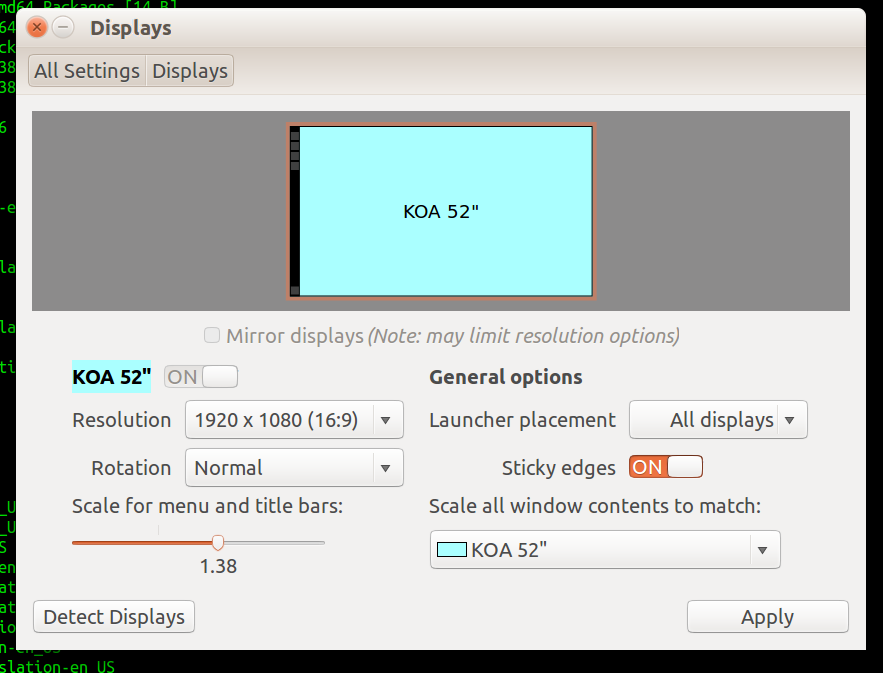 As far as my experience in Ubuntu goes, changing the font DPI setting changes a lot more than just the way fonts are rendered. It also applies to icons and the size of menus for example.

It's just that Xorg hints the Desktop Environment on what the physical display's DPI is. And yes, you can override this in the Xorg.conf, but it has the same effect as changing the setting in your DE. For example in Kubuntu/KDE: 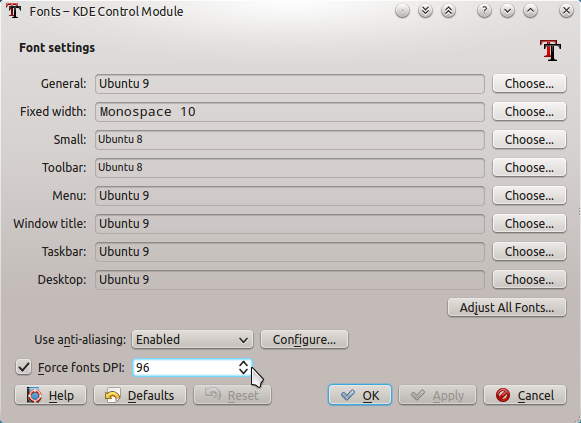 Instead of "DP-0", put whatever

tells you as device name.

You can tweak the scale of course, but 0.5 somehow did not look nice on my screen.

While the xserver-command=X -dpi ... and xrandr --dpi ... given above may have worked very well in earlier versions of Ubuntu, in Ubuntu 13.10 (which is what I have) Unity ignores those settings and keeps the dpi fixed (as far as the X server is concerned at 96 dpi).

And the xrandr --scale ... command does scale the screen as described but scales it in such a way that makes text and icons a little bit blurry. But it works.

It appears that in Ubuntu 13.10 the best option might be not to try to change the dpi setting for the X server but instead use the unity-tweak-tool to change the default fonts used by Unity and the default font scaling factor. You can download the unity-tweak-tool from the Ubuntu Software Center. When you open the unity-tweak-tool go to the Fonts button and try changing the font scaling factor to 1.2 or 1.25 (or higher or lower) to get the fonts to appear a good size for you. On this control panel you can also change the default fonts used by Unity. Admittedly this solution doesn't scale everything on the screen, just the text, but it works really well on my laptop with its 166 dpi screen. It appears web browsers like Firefox and Chromium don't notice this setting setting but each both Firefox and Chromium allow you to set a minimum font size in their application settings to scale-up the fonts on web pages in the same way.

In /etc/X11/xorg.conf.d/xorg.conf, I added the followings:

This sets the system-wide dpi settings to the right 143dpi:

I also did all the above mentioned tweakings too:

Pretty much I need to tweak every application, I plan to use. Also in browsers this zoom also results blurry images (icons, buttons on webpages, etc), because it gets zoomed too. I would love to set some image to 1:1 and 2:1 size with a single click or gesture.

Open it and go to 'Tweaks > Fonts'. Then change the 'Text scaling factor'

You can scale everything with xrandr, which is probably what you're looking for. I'm not sure how it works internally, but the effect seems to be a dpi change.

As I ended up on this question looking for windows HiDPI scaling in Ubuntu Gnome, here's my addition to random suggestions, so that I'll find it when I need it again. :)

To access this dialog, open Gnome Tweaks and go to Windows section. 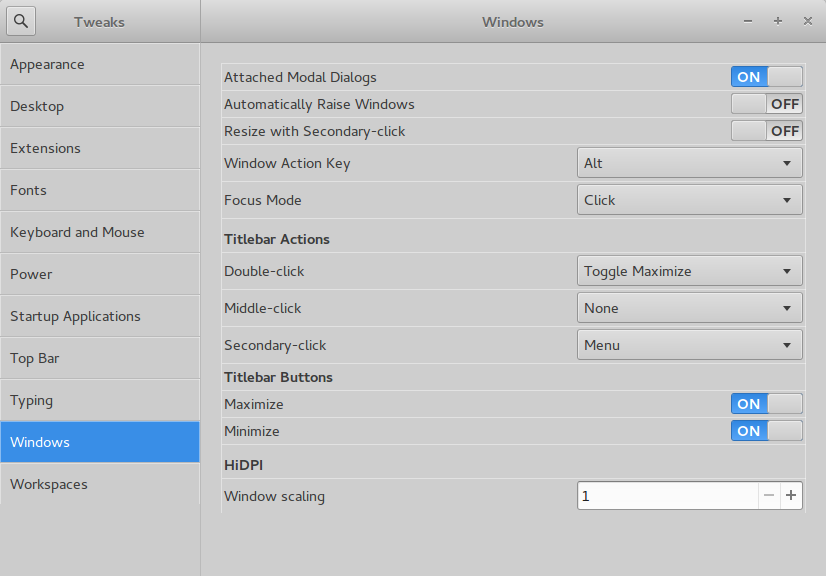 Or only pan the screen, so you have to use the mouse to see parts that are not visible on screen:

You can't actually change the physical ppi of your monitor. The real ppi is the actual hardware ppi, however most software will assume a ppi of 72 dpi for historical reasons, though 96 dpi is not uncommon now.

If you install MyUnity you can change the font DPI, amongst other things.

Not the answer you're looking for? Browse other questions tagged dpi or ask your own question.

10
How to change the screen DPI in 11.10?
3
How to determine the right dpi for a display?
1
Reducing Ubuntu screen DPI
0
2K and 4K Dual monitor DPI (many topics problem NOT solved)
0
How do I raise the screen DPI of my kubuntu installation?
146
Is it possible to have different DPI configurations for two different screens?
54
Ubuntu on Lenovo Yoga 2 Pro
84
Adapt Ubuntu to a high-DPI resolution screen
22
How do I change the font DPI settings?
17
How to run xrandr commands at startup in Ubuntu
See more linked questions

5
Custom DPI settings in KDE
22
How do I change the font DPI settings?
8
How to get the right DPI resolution on Ubuntu 13.04 Saucy?
12
ubuntu as guest in virtualbox at host with high DPI screen
6
Set Openbox to be readable on a QHD screen?
1
How to change DPI in Ubuntu GNOME 14.04?
1
Need to manually change scaling when remote desktop connecting to high resolution display
2
Changing DPI of login screen (Ubuntu 16.04)