How do I change fonts and adjust their size?

I've been finding fonts on the internet and installing them on my system.

What's the easiest way to change my fonts? I would prefer an easy to use graphical way, but answers with command line recommendations are also welcome.

And change the font and font size.

For Unity interface users, customisation of fonts can be done using unity-tweak-tool 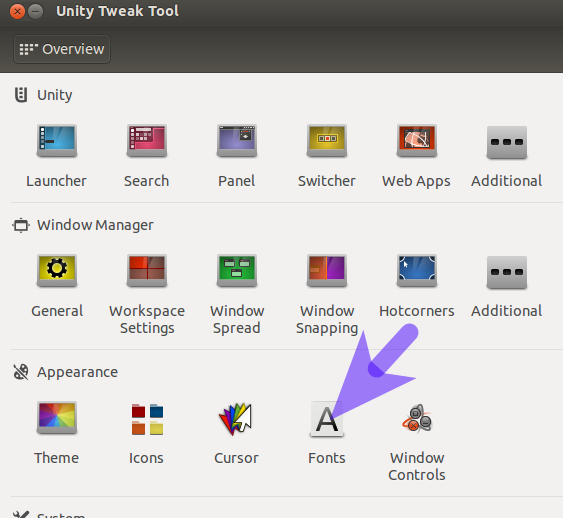 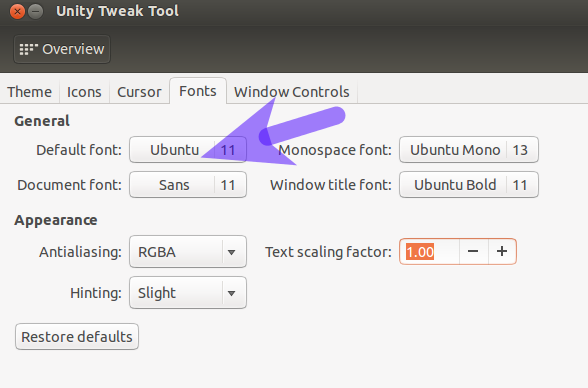 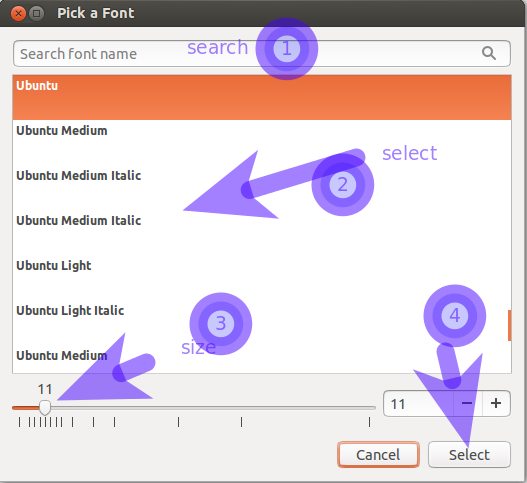 For Unity interface users, they have their own tweak-tool. Customisation of Fonts in 12.04 can be done through myunity 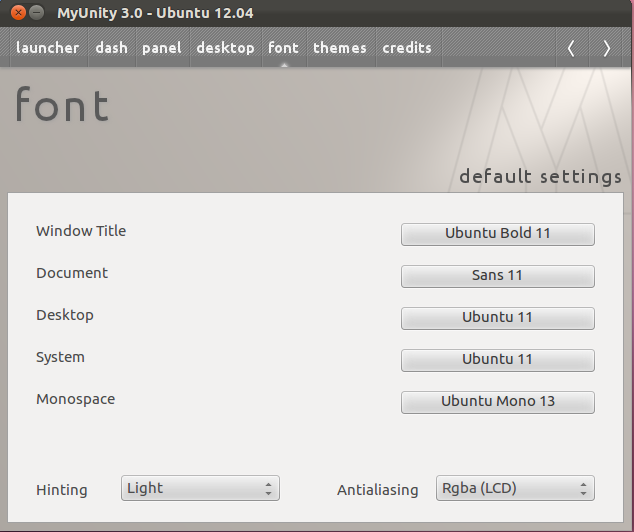 In Oneiric (11.10), I wasn't interested in installing GNOME Shell just to change font sizes. This will do it via command-line:

The fontfaces are the same as in default Oneiric, but sized down to what looked like much more manageable sizes.

Right click on the desktop and select "Change Desktop Background" and then click the Fonts tab. Couldn't be easier!

(NB: After playing with these setting you may wish to reset your font configuration.) 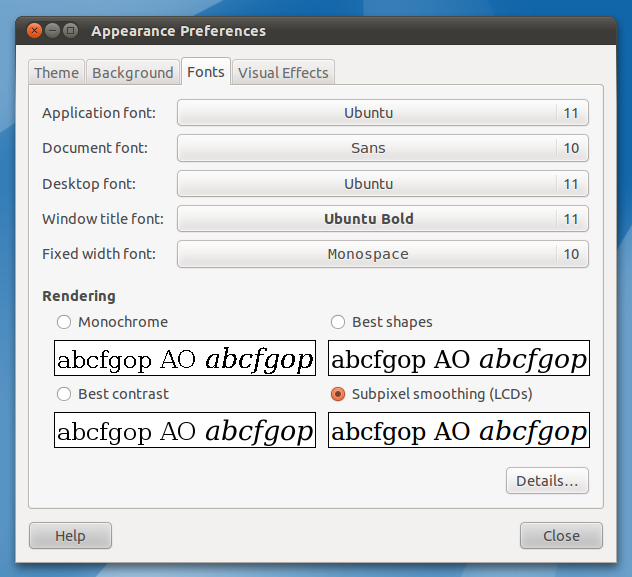 Where Ubuntu 10 is the font and size you want to use. It defaults at Ubuntu 11. 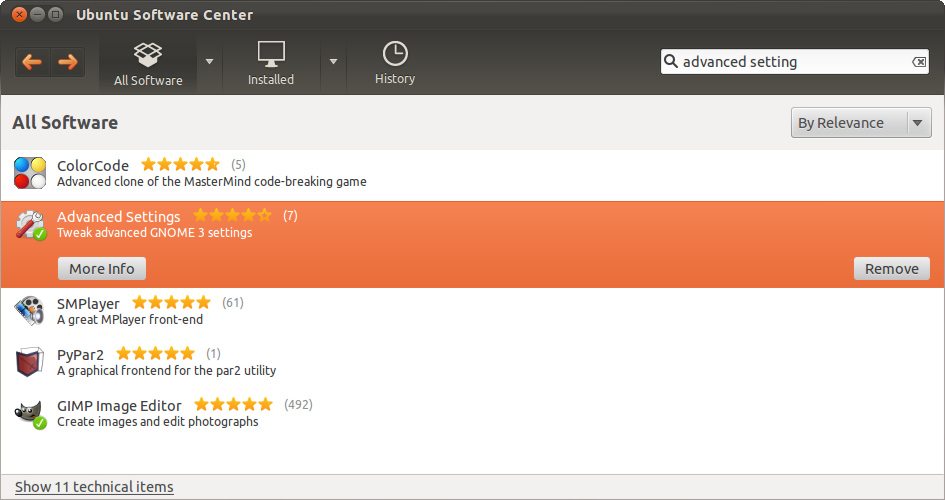 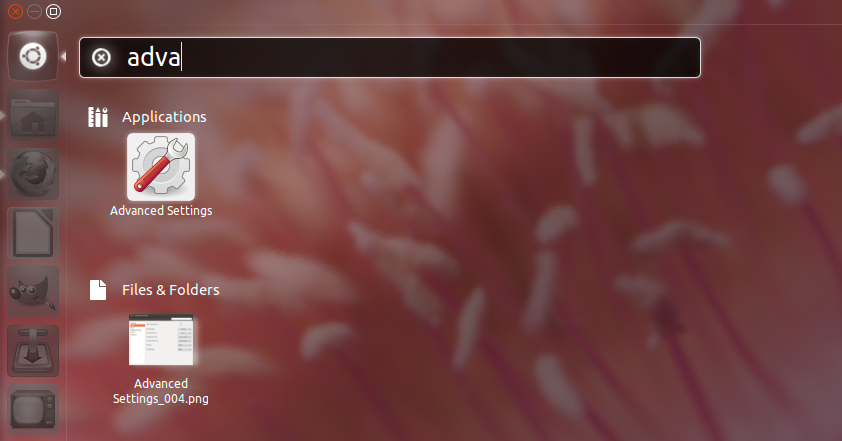 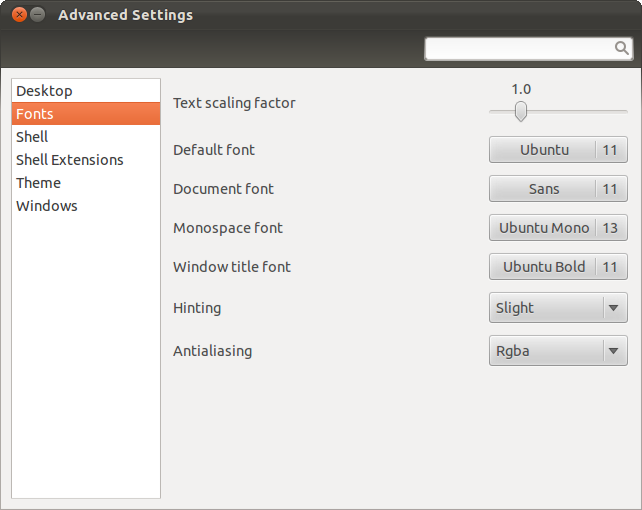 You can also install DConf Editor ("dconf-tools" package [only a few KB]) from Ubuntu Software Center.

To change fonts and/or their size

To change fonts hinting and/or antialiasing

DConf Editor gives useful information for the selected parameter thanks to the fields "Summary" and "Description".

The old gnome-appearance-properties is not available under Ubuntu 11.10 and newer.

Aleksandar is correct. You can change the system font settings by installing gnome-tweak-tool (sudo apt-get install gnome-tweak-tool). However, it should be also noted that at this time, doing so also forces you to install all of GNOME-Shell, mutter, clutter, and about 20 other packages.

It's far from the end of the world, but it seems excessive just to change system fonts. (Confession: I did it anyway :).

I doubt it actually needs these things since the tool itself runs fine under Unity, however that's the way the package dependencies are currently set up.

Also note: The fact that you can't change the system fonts from "Appearance" any longer is not a design decision made by Ubuntu developers. These settings were removed from GNOME 3 by upstream GNOME. That this change appears in 11.10 is a result of the migration from GNOME 2.x to GNOME 3 libraries and tools.

If you install Ubuntu-Tweak, you can change the font settings from their own tab. It is not yet at a stable version however, so the general "use at your own risk" warning applies.

The benefit is: you don't need to install GNOME-Shell. 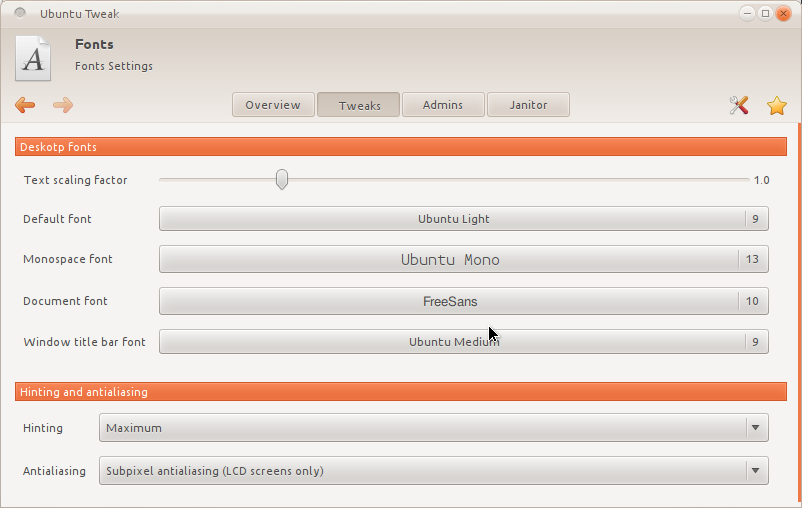 To install it, first add this PPA:

and then install ubuntu-tweak in the software center.

There is also another option, which is less "official", but works well. It is a font settings dialogue for the GNOME Control Center.

You can get it here: http://gnomefiles.org/content/show.php/GNOME+Font+Settings?content=146126 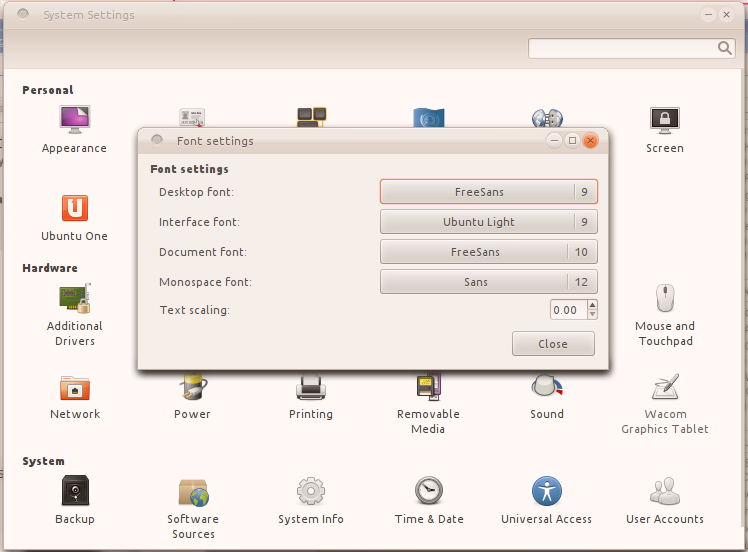 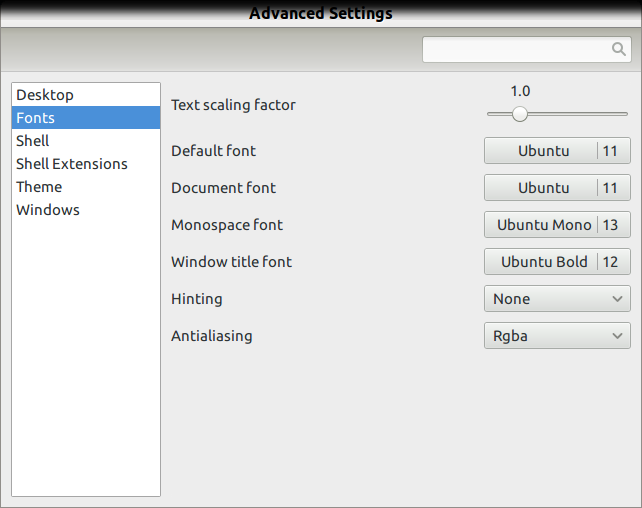 Install it using the below commands in the terminal. 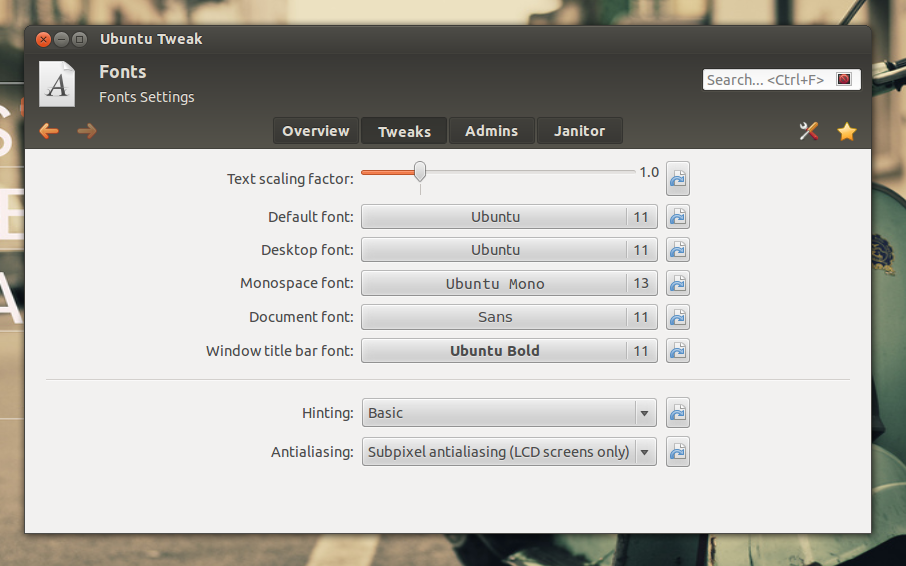 This has worked for me, but I'm actually on GTK3 version 3.24.10. My research though indicates this has been a problem since 3.17.

Change the gtk-font-name setting in ~/.config/gtk-3.0. The value should include the font name and size such as...

You can use gnome-tweak-tool.Search it in synaptic.

I couldn't find it either.

I came to the conclusion that installing an app called MyUnity was the most reasonable solution for now. In the Ubuntu Software Centre search for: MyUnity, or:

Once installed and launched, try tweaking the settings under "font."

5
How to change default font size in menus after Wine?
0
How change system font color Ubuntu 12.04
78
How can I determine which fonts are installed from the command line, and what is the easiest way to install more?
4
How can I batch install fonts (Kubuntu 14.04)
1
Only allow websites to use already installed fonts and not download their own in Firefox
3
Change font and cursor size with custom Xsession
3
Chrome fonts too narrow and line spacing too big
3
How to Reload Fonts in LibreOffice