How do I find my network IP address, netmask, and gateway info?

I'm trying to make my IP address static as I hear it fixes slow browsing issues.

When I click on connection information under the networking menu of the gray taskbar, it tells me about the IP address, subnet mask, and DNS, but nothing about the gateway.

I would like to know if there's a terminal command to find the information.

An example listing is:

If eth0 doesn't work, you may need to use eth1, eth2, ... depending on your configuration.

You can use ifconfig, it will show your inet address (IP) and mask.

For the gateway, issue the ip route command and take note of the default route. 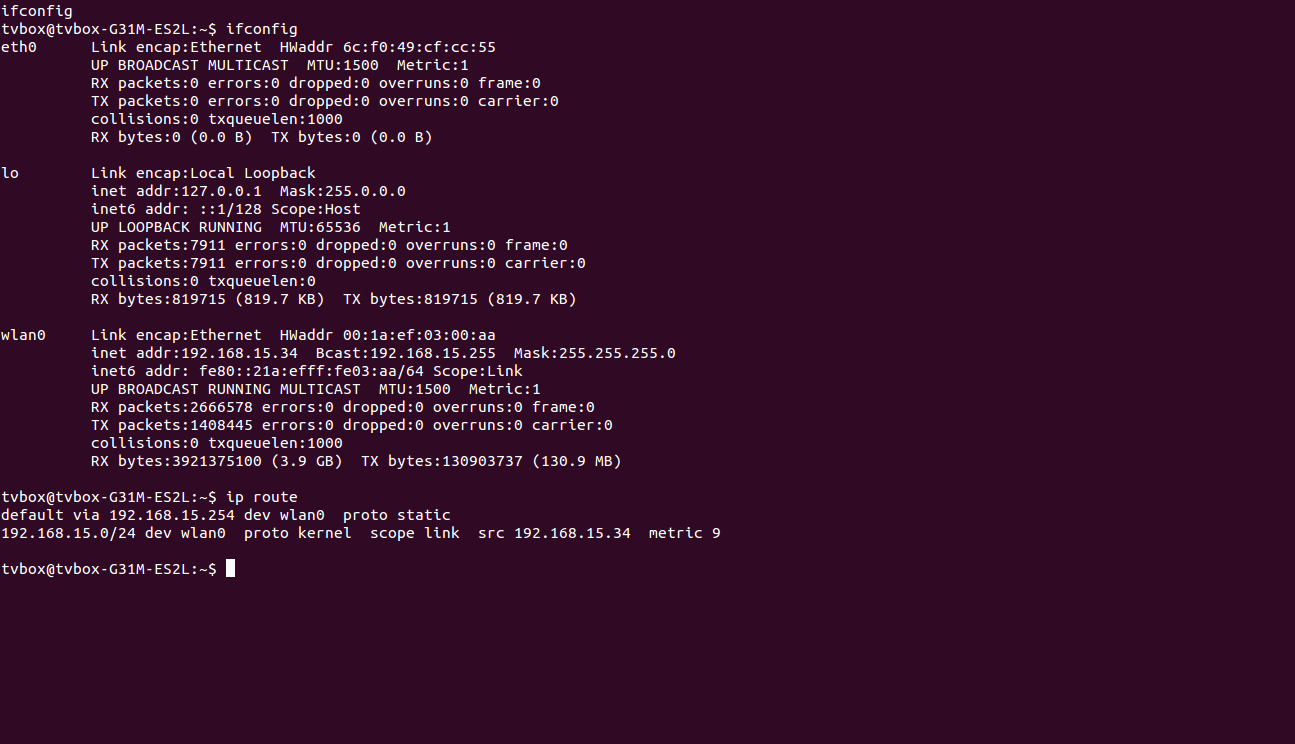 Hope this can help you.

"The network" typically means everyone above you, including the Internet. To get to "the network", the network address is used. In reality, most people call "the network" anything with ethernet cables that can talk to each other.

Often, you'll see networks described with a /. Here's this network:

In versions before 15.04 there used to exist nm-tool utility.

This small utility would interface nicely with the Network Manager and produce a report with appropriate information on each line, which was quite simple to parse with text processing utilities. Sample output:

Rinzwind's answer on the related question has cited the changelog for Network Manager package, which explains that it has been dropped upstream and superseded by nmcli. It should be noted, however, that nmcli before and after 15.04 differs with several command-line arguments. Here's alternative to the above:

With nmcli information is shown in accordance with each interface, i.e. there's set of lines for one interface, then separated by a blank line another set of lines and so forth.

Another alternative that one can use would be ip command which is preferred nowadays to ifconfig. According to pilona's and Gilles's answers on Difference between 'ifconfig' and 'ip' commands, Linux kernel and networking features have advanced forward but ifconfig and the package to which it belongs haven't evolved in a long time, and that's why we have ip utilities. For getting the addressing information on specific interfaces ip -o -4 addr can be used and ip route can be used for getting routing/gateway information.

nm-tool will also do the job.

Quick update to this old question. With newer versions of Linux you probably have the ip command now which replaces ifconfig.

or something like this on the newest versions of Linux:

The 3 return values are:

I use the following to get an overview of my network configuration:

ip addr , this show you an overview of your NIC settings route -n , it gives you a nice overview of where your traffic is going. cat /etc/resolv.conf for dns info cat /etc/hosts for preloaded hostnames

Changing to a static IP address will not affect your browsing speed though. The only difference between static and dynamic is that on static, you always have the same IP address. With dynamic, you will be assigned a "random" IP address by your DHCP server when you connect to the network. Once you have been assigned an IP address, it will behave exactly the same way as if you had assigned yourself a static IP addresss.

Not the answer you're looking for? Browse other questions tagged networking info or ask your own question.

32
Why nm-tool is no longer available in Ubuntu 15.04?
2
The 'proper' way to get ONLY my eth0 netmask via CLI in Ubuntu 18.04 on VPS?
2
Is securing phpMyAdmin with .htaccess considered sufficient?
1
Create laptop as Access Point

1
Wired network connection active, but Firefox not detecting connection
39
What is the equivalent terminal command to ipconfig /all?
3
How can I get unformatted ip address information in the shell?
0
network configuration in ubuntu 12.10
1
local network: how to change broadcast address (with GUI)
1
what does it mean to 'configure a network'?
1
What's wrong with my isc-dhcp-server configuration?
0
Find Camera IP address and subnet mask
1
Setting up /etc/network/interfaces
0
Unable to set up a static ip ethernet connection in Ubuntu 20.04 Desktop, what is normally put for netmask and gateway?