How do I synchronize files or directories on an Android device with Ubuntu One?

I'm missing some very basic Ubuntu One usage information, like how to synchronize the files between Ubuntu One, my Android phone, and my Ubuntu 12.04 PC.

Is there a users guide or reference manual someplace?

The android app can be found here.

The way this works is that everything in the Ubuntu One folder (located in your home folder) is automatically synchronized to the cloud. You can add more folders to be synchronized by right clicking on them in the file manager and navigating to the Ubuntu One sub menu and finally clicking Synchronize This Folder.

On Android your photos are uploaded to a folder named after the model of your phone (mine is Pictures - HTC Ruby), and you can select files to be downloaded from Ubuntu One to your phone. These are not synchronized with their versions in the cloud after download, however.
You can upload files within the android app by navigating into a folder and hitting the + icon in the right. You will need an app like File Manager installed to be able to just select any file from the SD card, however. To do this, select Add file after tapping the + icon and select File Manager (or your preferred app) from the list. 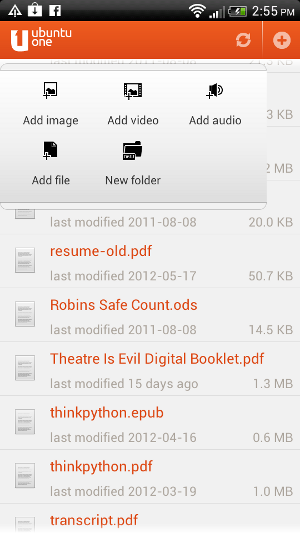 To get your pictures or other files in Ubuntu One on your PC you need to use the Ubuntu One app for Ubuntu (Open the dash and type Ubuntu One). Select the folders here that you want to sync to your computer: 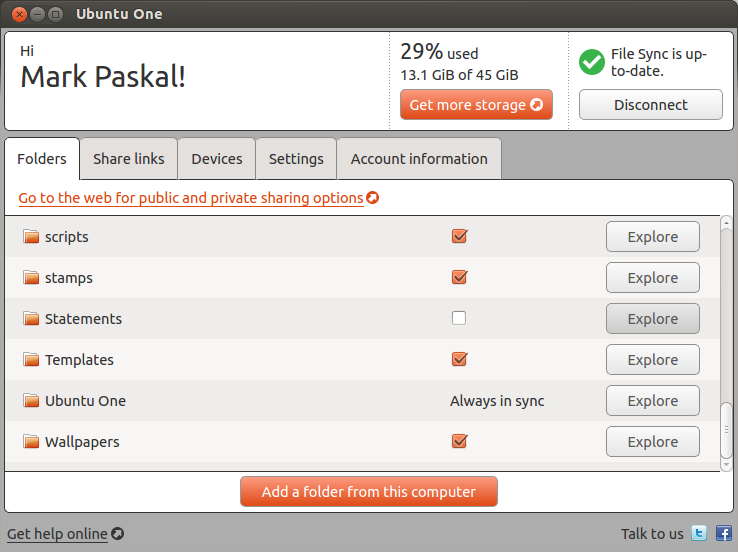 The folders in the cloud that you select will be placed in your home folder and synchronized with other computers. For example I sync my scripts so I always have my most current work no matter which machine I turn on.

There is also a music app for Ubuntu One that requires a subscription to work. It can stream your whole music collection to you, which is great if you have an unlimited data plan. It can be found here, if you are interested.

FolderSync is an app that lets you sync selected folders between Android and various cloud services, including Ubuntu One. The free version shows ads and limits the number of cloud services you can use simultaneously.

Very old post and strangely, Ubuntu One Mobile App still does not support syncing like Ubuntu One desktop App. In mobile devices, it just lets you access what's present in your U1 account. If you download and modify a file, it does not sync back to U1.

As far as third party sync apps are concerned, i don't trust them on the permissions they ask, and the ads they show.

I had the same issue while using Ubuntu One App on my BlackBerry Z10. This solution I came up with, will work for all platforms all devices not just Z10.

It might seem little complicated to use for some users. But here it is.

Shell script I use to sync the folder with phone memory or memory card : After connecting my phone using USB mass storage(my memory card name is MICROSD in my case)

So this goes to: 1. First thing first, the folder i want to be synced with my phone, is already in sync with U1 and my Laptop.

This script syncs folder on my Laptop which is at ~/MyFolder, with the folder in my Z10 memory card at /media/MICROSD/BlackBerry/documents/MyFolder

Replace these paths in the script with relevant paths for you

Now save this as SyncMyFolder.sh and check "Allow executing file as program" (just in case you don't know this) under permissions in file properties

All set and you can now connect your phone using mass storage. You can now hit enter on SyncMyFolder.sh and choose "Run in terminal". It'll show you what is being done in the terminal window. When you see "echo phase 2/2 completed..", the folder is synced.

The only con of this process is that i have to sync my phone this way every night manually. The files I modify on my phone are now synced with U1.

There is another possibility to sync files from Ubuntu One on your Android Mobile to your PC. However, it means using dropbox to transmit the file temporarily between the SD card and the Ubuntu one folder. That said, I would prefer this method than installing something unknown or messing too much with the configs. At the end of the day your main storage is in Ubuntu and you delete the file to be transported in dropbox later. It's just a temporary transport mechanism but this works to sync from Ubuntu back to the PC then.

Step 1 - open doc with office, edit doc etc. Step 2 - save as, /storage/sdcard0/u1/Ubuntu One/folder Step 3 - Go to /storage/sdcard0/u1/Ubuntu One/folder Step 4 - Click file and send it to dropbox Step 5 - Go to Ubuntu and click 'add file' from dropbox folder where you saved Step 6 - Sync file on mobile device and it will appear on your desktop now in file list Delete file from dropbox

5. data retention "there may be latency in deleting information from our servers and backed up versions might exist after deletion"

Step 2b. You could save it, encrypt it, then send it to dropbox and decrypt it after on your pc or mobile after sync (if you must).

Not the answer you're looking for? Browse other questions tagged ubuntu-one sync or ask your own question.