How to access files on a drive from an older system, mounted in a new system?

I've recently built a new system, after a rather large physical injury was sustained by my previous system (a precarious balance, and gravity, were not a happy mix). Surprisingly the /home drive of that system appears to have more-or-less survived the trauma. However...

I decided to use a fresh drive for / (and swap) partition(s), and another fresh drive for the new /home. Now that's working, I decided to install the old /home drive (that I had assumed until now would be entirely dead and without capacity for use) into the new system to recover the files and data (so far as is possible).

At this point I've run into a snag: I have no idea how to go about this (with Windows it was relatively easy, the new drive would be the latest character of the alphabet, and go from there).

With 'disk utility' (System -> Administration -> Disk Utitlity) I've worked out which drive it is (/dev/sda) but clicking on 'mount' produces an error:

mount: according to mtab, /dev/sdb1 is already mounted on /

...if it is mounted on / I can't see it. I'm also moderately confused by the disk (device /dev/sda) being referred to as /dev/sdb1.

Any and all insights would be incredibly welcome (I've already voted for: Idea #9063: New internal hard drives default automount at Brainstorm).

Edited in response to Roland's request for a screenshot of disk utility: 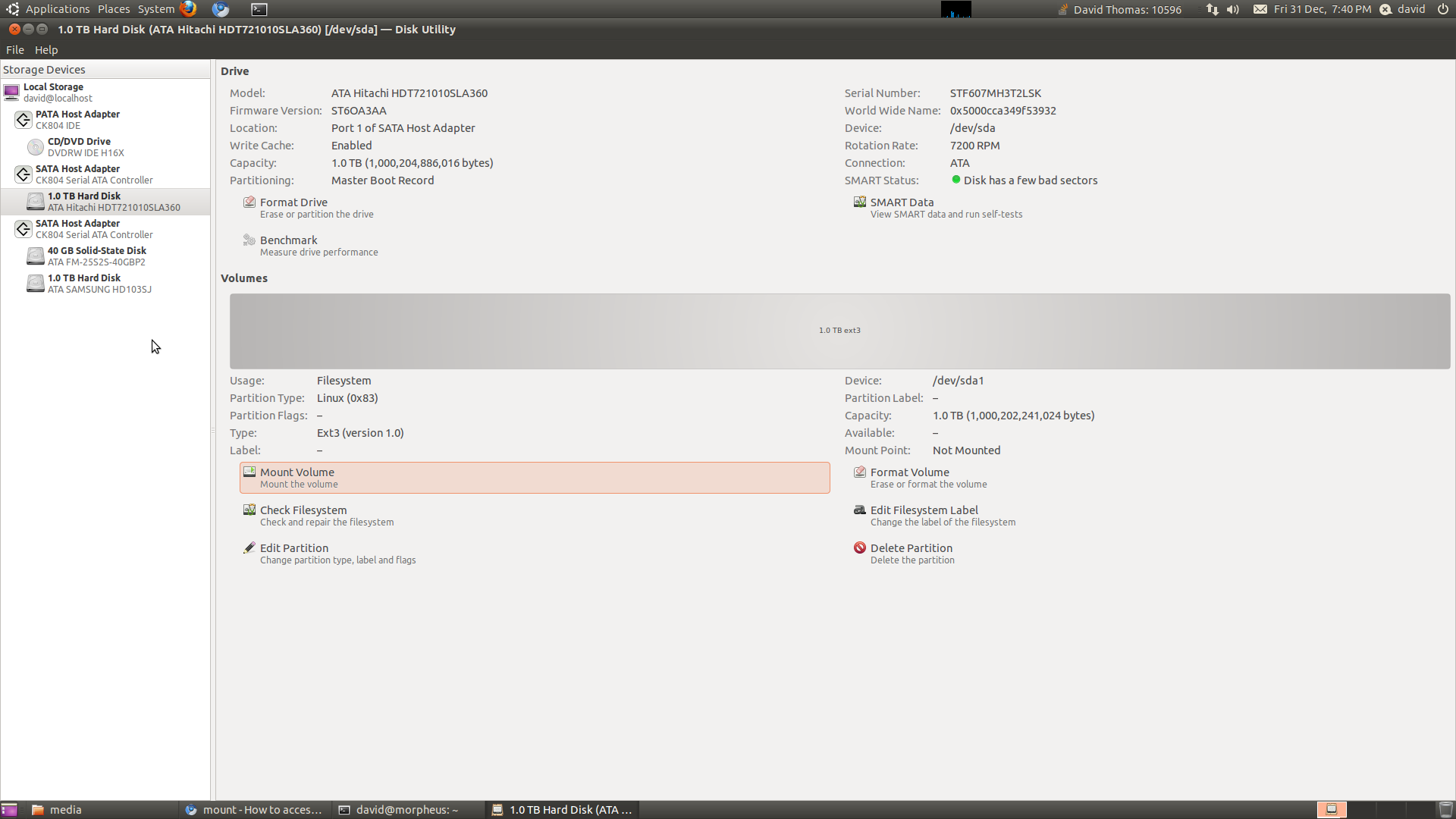 Details (so far as I know them):

I ran the following:

The first part works as expected, and creates the directory, the second part runs for some time and errors out with the following:

I must confess that I'm beginning to believe that the SMART report, that suggests the disk is healthy with a 'few' bad sectors, may be a little inaccurate.

Edited, as requested by @Danny Staple (below), with the output from dmesg | tail:

It's my sad duty to share the news of the untimely death of one 1.0 TB Hitachi hard drive, due, I'm assuming from the heart-stopping clicks in its last moments of life, mechanical damage sustained in a fall. It, and its many contents, will be sorely missed.

Unfortunately the data was not recoverable by any of the suggestions raised in this question, which leaves me in a slightly awkward position: I don't want to have a non-answered question, so I'll side with the community votes and accept @Danny Staple's answer, since it seemed the most promising suggestion (and, again, was the most community-rewarded answer), but I will note for late-comers in future that this question was not (really) resolved, so the solution offered by @Danny may, or may not, work for others.

Thank you all for your help, and suggestions.

You actually want here to mount /dev/sda1 and not sdb1.

You should be able to mount that from a command line:

And your old home should now be on /mnt/oldhome.

actually in disk utility I'm driven to suppose you are trying to mount / which is already your root drive. So you need to mount the new drive (find it by running sudo fdisk -l in a terminal) and add it to your fstab

If you can, please add a screenshot of disk utility as well, so we can see what it sees.

I have a couple links here that explain how to add the drive to the fstab. The one catch might be adding the UUID, I'm not sure if that is covered.

Not the answer you're looking for? Browse other questions tagged mount data-recovery drive or ask your own question.

12
how to interpret these errors from syslog