How to enable or disable services?

I read about how to enable and disable services in Ubuntu and it seems that there are different possibilities to manage them.

The first method I found is update-rc.d to add new services to startup, which aims on the /etc/init.d folder and its contents.

The other one I found is to edit .conf files in the /etc/init folder.

What's the recommended way to enable / disable / add services and why?

Could you please give a short bulletproof step by step example on how to add a service in Ubuntu and enable and disable it?

There are services that can be enabled/disabled using the GUI (like the startup application) or the terminal.

For the Terminal you have several options. First, open a terminal (Type "terminal" in the dash, for example, and open it). Then:

To stop and start services temporarily (Does not enable / disable them for future boots), you can type service SERVICE_NAME [action]. For example:

Starting with Ubuntu 15.04, Upstart will be deprecated in favor of Systemd. With Systemd to manage the services we can do the following (through the systemctl action SERVICE pattern):

If we want to use the official Upstart way (Note that, for the moment, not all services have been converted to Upstart), we could use the following commands:

status SERVICE - This will tell us if a converted service is running or not. Note that this is deprecated in favor of start, stop, status & restart. It will also tell us if a service has not yet been converted to upstart:

Some shortcuts may only work with the service command above but not with the commands below unless they are 100% converted to upstart services:

To toggle a service from starting or stopping permanently you would need to:

where the stanza manual will stop Upstart from automatically loading the service on next boot. Any service with the .override ending will take precedence over the original service file. You will only be able to start the service manually afterwards. If you do not want this then simply delete the .override. For example:

Will put the MySQL service into manual mode. If you do not want this, afterwards you can simply do

and Reboot for the service to start automatically again. Of course to enable a service, the most common way is by installing it. If you install Apache, Nginx, MySQL or others, they automatically start upon finishing installation and will start every time the computer boots. Disabling, as mentioned above, will make use of the service manual.

Currently there are actually three different ways for software to be started as a service in Ubuntu, SysV, Upstart and systemd. A service is defined here as a program run by the system in the background, as opposed to one started and run directly by the user.

The traditional way to start services in Linux was to place a script in /etc/init.d, and then use the update-rc.d command (or in RedHat based distros, chkconfig) to enable or disable it.

This command uses some mildly complicated logic to create symlinks in /etc/rc#.d, that control the order of starting services. If you run ls /etc/rc2.d you can see the order that services will be killed with a file name like K##xxxx and started with file names S##xxxx. The ## in S##xxxx means a "start order" for service xxxx. Conversely, the ## in K##xxxx means the kill order for service xxxx.

One major issue with SysV was that when booting the system, everything had to be done in serial, one thing after another, making system boot times really slow. Attempts were made to parallelize this, but they were haphazard and hard to take full advantage of. This was the main reason that Upstart was created.

Upstart uses job definition files in /etc/init to define on what events a service should be started. So, while the system is booting, upstart processes various events, and then can start multiple services in parallel. This allows them to fully utilize the resources of the system, for instance, by starting a disk-bound service up while another CPU-bound service runs, or while the network is waiting for a dynamic IP address to be assigned.

You can see all of the upstart job files by running ls /etc/init/*.conf

Let me just stop here and say that if you don't know what a service is, or what it does, DO NOT disable it!

Not all services have been converted to upstart. While working on the server team at Canonical for the past few months, I've worked on a number of converted job files, and the nicest part is that it allows one to get rid of all the script "magic" and just put in a few commands here and there to define exactly how to start the service, and nothing more. But for now, only a handful of traditional network services, like squid and samba, have been converted.

In order to figure out if a service is upstart-based, you can run the status command:

If it's an upstart job, it will show this:

But if it's not, you'll see something more like this:

In this case, apache2 has not been converted to upstart. So, to disable apache2 you just run

Upstart job definitions do not have an update-rc.d command. To disable the job, you need to edit the job file directly to disable it. There are two ways to do this.

If you want to still be able to manually start it, then you need to comment out the start on condition. Say you want to install samba, but not have it start automatically. Here is the job file (in natty):

To disable samba, you can just put a # in front of the "start on local-filesystems". Note that while it won't start back up on boot, you still need to stop it this time with

Disable a service using start/stop stanza (as of 11.04)

Starting with the version of upstart that will be in 11.04, there is a new keyword that disables the start on and stop on stanzas: manual. So another way to disable the service as of 11.04 is to do:

You can create an override file to disable a service without editing the job definition at all, by just putting the manual keyword in it.

and to start managing the services, execute 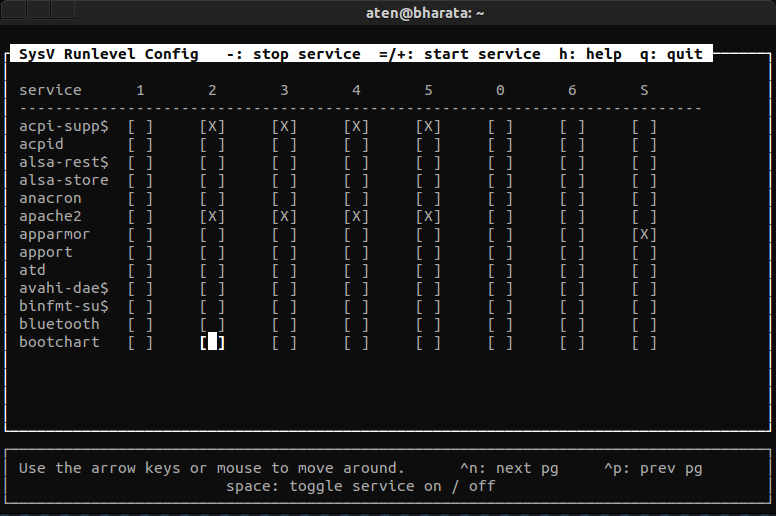 You can further navigate through pages using Ctrl+n for next page and Ctrl+p for previous page. You can enable and disable services by selecting SPACE on desired runlevels.

Another alternate would be Jobs-Admin by installing through 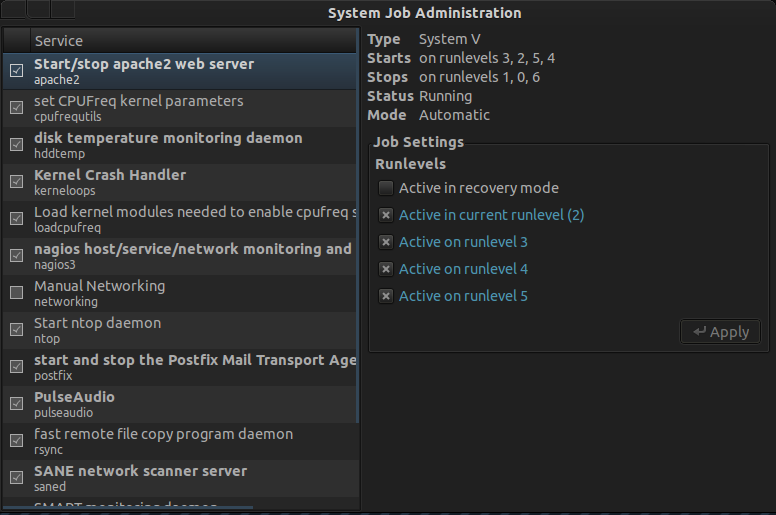 For showing more jobs , you have to tick the Show Protected Jobs from its menu.

And third option would be chkconfig,

It can be used via CLI chkconfig, showing list of On/Off jobs. Also we can view system services using chkconfig –list

Services can be turned on using

Services can be turned off using

And we can even add our own service, using a proper init script with proper headings.

And another option can be referred here update-rc.d , explained briefly here.

Note that for Ubuntu Server 12.04, update-rc.d is used instead of chkconfig.

For those of us who run Ubuntu over ssh, I think the nicest option is rcconf - a text based program: 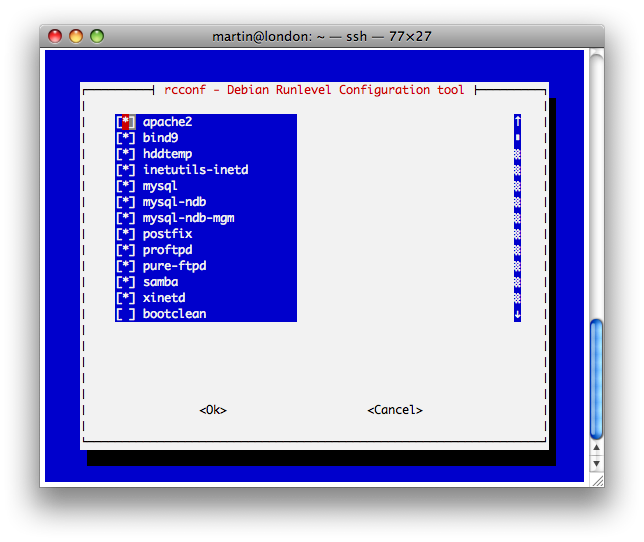 Navigate with tab and arrow keys, press spacebar to enable/disable. Changes are persistent across restarts.

Screenshot borrowed from this blogpost, which also shows sysv-rc-conf - a similar tool that also lets you set the runlevel. (For those who happen to care enough about runlevels to wish to change them :)

Unfortunately, rcconf doesn't work with upstart (services listed in /etc/init/*), just with the traditional mechanism (ls -l /etc/init.d/* - the ones that are not symbolic links).

Fortunately, many of the services that are relevant when ssh-ing in to a server (Apache, Tomcat, mdadm, boinc-client...) haven't been moved to upstart yet.

I found out that up to bionic there is this GUI tool, something like BUM but compatible with Upstart: Jobs-Admin

Editing the existing upstart configuration file (as described above) is not such a good idea. An updated package could provide an updated config, and you'd had to repeat your changes over and over.

By taking a look at man 5 init one will find a more appropriate solution: using an override config. Short example: Say we have a service called "foobar", so there would be a file called /etc/init/foobar.conf with its upstart configuration. Now you don't want to remove that file, nor to modify it -- but neither you want this service to run? So place an override file next to it: /etc/init/foobar.override, containing (optionally the header with the description and) instead the start on / stop on lines you place a line with one word: manual. This way you tell upstart to basically use the foobar.conf, but override the startup definition to only start that service when manually enforced (via service foobar start in our example).

There is also the Boot-Up Manager. 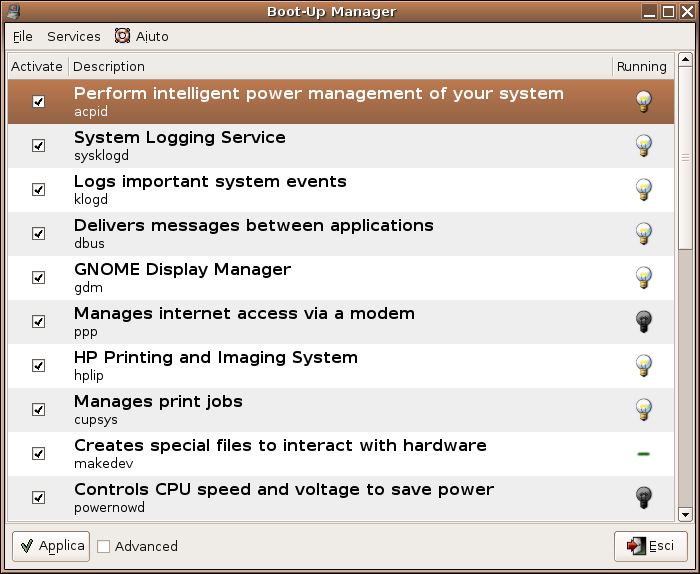 Simplest method for me as I use CLI only is update-rc.d.

To enable or disble auto-start on reboot etc :

To stop or start a daemon or check its status:

update-rc.d can do a little more than the basic shown above:

As always; you van refer manpage.

Stacer is an open source system optimizer and application monitor that helps users to manage entire system with different aspects, its an all in one system utility.

Not the answer you're looking for? Browse other questions tagged upstart services or ask your own question.

154
Disable autostart for a service without uninstalling?
75
disable services on startup in ubuntu
66
How to start and stop a service?
19
How can I ensure a service is disabled on boot?
19
Automatically Run a Command/script at startup
8
How do I turn off avahi-daemon on boot?
2
name of a program for configure startup services
2
How to remove from autorun postgresql in xubuntu?
4
How to start, stop, restart a service
3
How can I make Ubuntu to run only one application on startup
See more linked questions

8
How do I choose which way to enable/disable, start/stop, or check the status of a service?
43
How can I disable avahi-daemon?
12
How system services are started in 12.10?
2
How to add startup services?
16
Why don't custom upstart job names tab complete in the service command?
2
initclt not seeing init script in Ubuntu 12 64bit
10
What is the right way to restart dependent services while package installation?
0
How to enable user's systemd timers and services for Grive2?