Is there an offline command-line dictionary?

Is there any command line offline dictionary? I know that there are some like StarDict and Artha but how about one in the command line?

Also, I tried dict but it is an online dictionary.

sdcv is the console version of Stardict.

Run the following command in the terminal:

Download the dictionary files according to your requirements from the following sources.

Make the directory where sdcv looks for the dictionary:

The next command depends on whether the downloaded file is a .gz file or a .bz2 file.

To search for a word use: 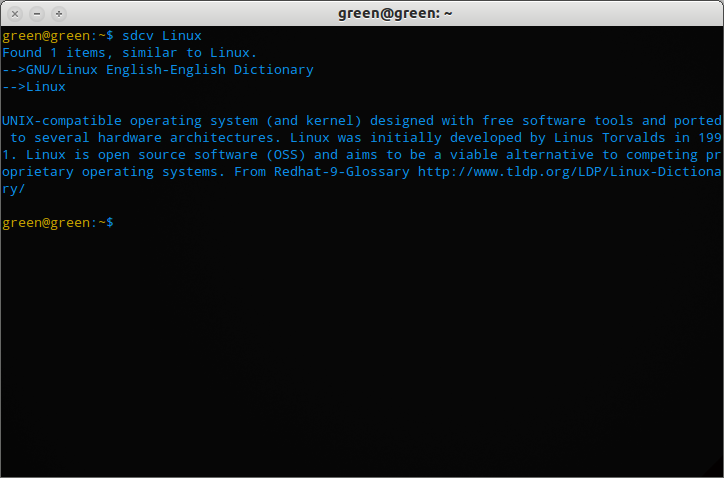 The dict command can easily be used with offline dictionaries. It suffices to install the dictd daemon with its dependencies alongside a local, offline dictionary. This turns out to be a much easier procedure than installing sdcv as suggested elsewhere on this page.

Below is shown how to install dictd along with the dict-gcide comprehensive English dictionary. There are many more dictionairies available from the standard repositories.

You probably also have aspell installed, which has the advantage of giving suggestions for misspelled words. You can call aspell directly on your text file with:

or use it on a single word:

If you're just looking to see if a word is spelled correctly or exists, you can use grep to look through the word list files in /usr/share/dict/, which are provided by the appropriate wordlist packages. An example to see if "emu" is a valid word:

That doesn't have any definitions, however.

You can use free dictionary with dict command:

How about downloading dictionary text file from the sites for example this link (warning: 4.5 MB), and then finding the text with command like grep "word" dictionary.txt

Or also by using VIM editor to search for the word with its command eg. /Word. And by pressing n or N for next or previous occurance of the pattern is more fun with finding meaning of the word.

I use the Princeton University WordNet application. I did not want to deal with Tcl/Tk so prepared a make file that allows you to run WN as a command line application. You do have to compile it, but I provide instructions to help somewhat. I personally find it automatic to popup a terminal on my Linux computer and type "wn unknown-word -over" anytime I want the definition for unknown-word. The nice thing about WordNet is that you get synonyms, antonyms and other linguistic nuances if you want it. Here is my github download link:

Incidentally, I edited all of the Princeton linguistic help files into a rational pdf which those interested in the more advanced capabilities will appreciate.

Not the answer you're looking for? Browse other questions tagged command-line software-recommendation dictionary or ask your own question.

5
Where can I find dictionaries for Opendict and Goldendict?
1
How to start the dictionary application after installation?
1
Adding new words to Artha
2
How to install Cambridge dictionary without wine?
4
Online command-line thesaurus?
1
Offline commandline Thesaurus?