How do I get a list of all files in a folder, including all the files within all the subfolders and put the output in a file?

You can do this on command line, using the -R switch (recursive) and then piping the output to a file thus:

You can list directories other than the current one by specifying the full path eg:

will list everything in and under /var and put the results in a file in the current directory called filename2. This works on directories owned by another user including root as long as you have read access for the directories.

You can also list directories you don't have access to such as /root with the use of the sudo command. eg:

Would list everything in /root, putting the results in a file called filename3 in the current directory. Since most Ubuntu systems have nothing in this directory filename3 will not contain anything, but it would work if it did.

An alternative to recursive ls is the command line tool tree that comes with quite a lot of options to customize the format of the output diplayed. See the manpage for tree for all options.

Just use the find command with the directory name. For example to see the files and all files within folders in your home directory, use

Check the find manual manpage for the find command

will give you the same as tree using other characters for the lines.

to display hidden files too

to not display lines

You could also use the GUI counterpart to Takkat's tree suggestion which is Baobab. It is used to view folders and subfolders, often for the purpose of analysing disk usage. You may have it installed already if you are using a GNOME desktop (it is often called disk usage analyser).

You can select a folder and also view all its subfolders, while also getting the sizes of the folders and their contents as the screenshot below shows. You just click the small down arrow to view a subfolder within a folder. It is very useful for gaining a quick insight into what you've got in your folders and can produce viewable lists, but at the present moment it cannot export them to file. It has been requested as a feature, however, at Launchpad. You can even use it to view the root filesystem if you use gksudo baobab.

(You can also get a list of files with their sizes by using ls -shR ~/myfolder and then export that to file.) 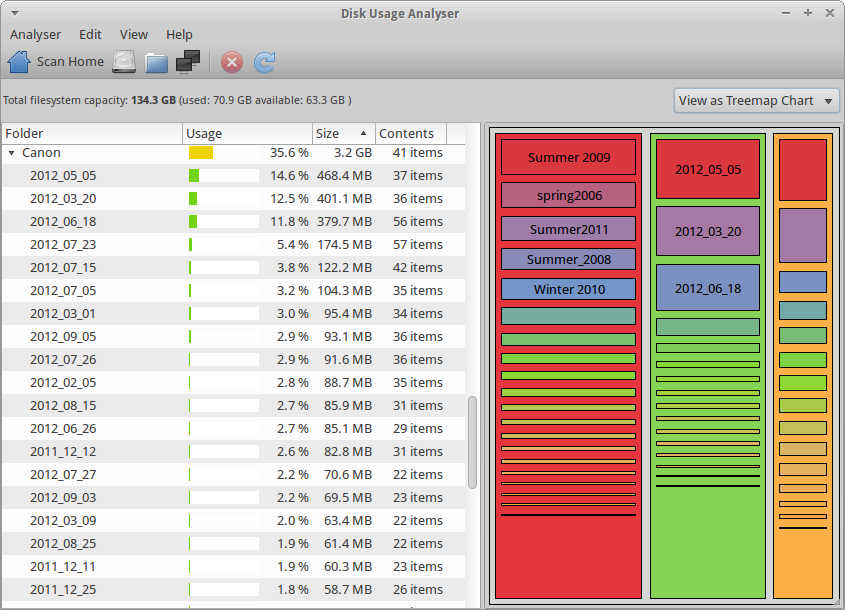 Not the answer you're looking for? Browse other questions tagged command-line files directory or ask your own question.

-1
Store file list of current directory to a file