How to place custom icons (not emblems) on folders in Thunar

(This is not a duplicate as this question describes how to add custom icons to folders in Nautilus, whereas there seems to be no explanation for Thunar.)

However in Thunar I can only seem to add emblems (see the screenshot below) and not actual custom icons (I have a folder of them scaled to the right sizes ready to use). I have looked round the Thunar settings and general Xfce settings-editor but have not been able to see a way of setting a custom icon on a folder. This question only describes how to add a custom emblem in Thunar, which is different.

My home folder in Thunar with emblems but not custom icons: 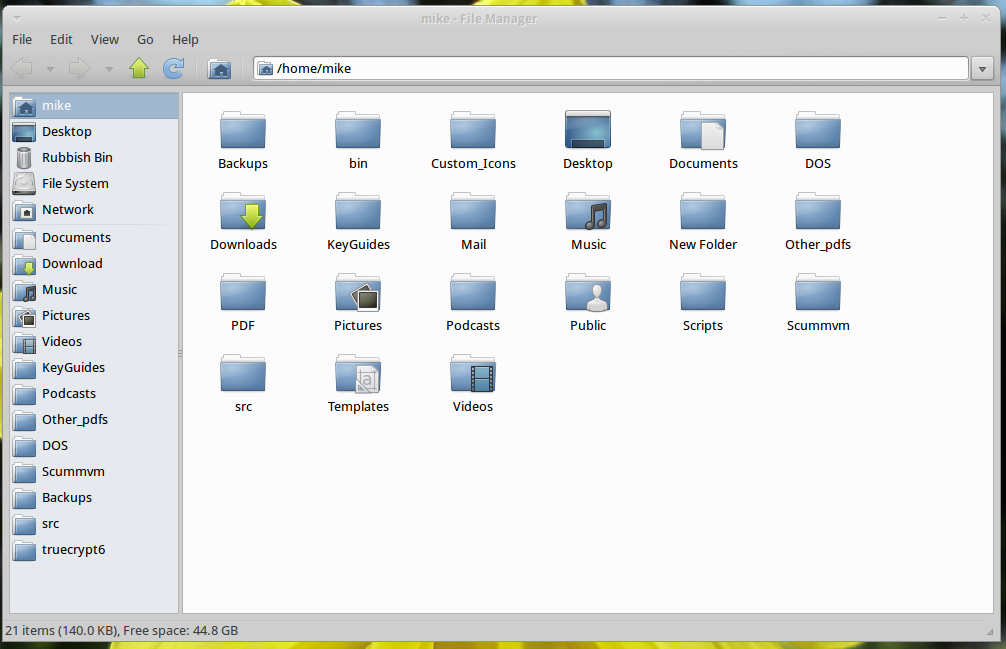 This feature request has come up on the mailing-lists several times, and was quite recently proposed in this discussion. However, the answer from Simon Steinbeiß, an active xfce and xubuntu developer, was that:

You can use either emblems (right-click > properties > emblems) or the user-dirs (the fixed list of user directories can be found and modified in ~/.config/user-dirs.dirs). No support for custom folder-icons at the moment.

There is a discussion at the xfce forum on how thunar custom icons could be accomplished, and a patch has even been submitted for thunar. It is explained that the patch

However, one of the leading xfce developers, Nick Schermer, has commented that

Non md5hash files in the .thumbnails directory is a bad idea.
The prefix-only check if a bit flawed as well, it can be improved with a dot-check (so foo2.png is not matched).

So the method as described in the patch has not really been validated by the developers, and because it would involve a lot of time compiling thunar and its dependencies (as noted here), and then a lot of risk in installing them to your system, I would advise against trying it. You could experiment of course in a virtualised environment (virtualbox) or on a computer set aside for development, but not on a stable system.

It is usually fine to compile programs and apply patches, as I have discussed in many examples on this site, but on this occasion it is better to wait until a solution is available that has been validated by the developers.

For now the question is 'solved', but I will continue to update it and indeed research the issue to see how it could be accomplished in the manner that it is done in Nautilus.

The best workaround is to create the desired "launcher" on the desktop in application launcher you can set a custom icon, even pick a file from your own collection.

Then cut + paste the launcher to the desired location.

For desktop folders, the solution I discovered by accident is as follows:

Find the icon you want your folder to have. It must be a .png file. Change the extension to .jpg. Change the file name to 'folder'. (So the png file should be named 'folder.jpg'.

Custom folder icons can be configured via thumbler with Thunar 1.8.2 or above.

You can add a custom thumbnailer specialized for folder.

Check the section"Customized Thumbnailer for folders" in the Thunar Wiki for details.

48
How can I assign custom icons to folders?
4
Custom action to set emblem in thunar

15
How to hide (in Thunar and Nautilus) a directory without putting a dot in its name?
1
Error when running script ('compress-pdf') in Thunar custom actions
3
Thunar RabbitVCS - Missing Emblems
9
How do I set emblems in Thunar without the GUI?
2
Thunar - Custom actions: select pdf extract pages as images
2
Add Custom Emblem in Thunar, Xubuntu 14.04
1
Are system-wide Thunar custom actions possible?
5
How do I get icons for Thunar in 18.04?
0
How to fix tumbler: random image thumbnail sizes in Thunar