I would like to copy or expand my /home directory ... All tutorials talks about moving the home directory from a partition to another but the problem that I only have one partition that was more than 300 gigs (before I resize it and create a new partition) although I see 30 Gigs only on my home directory (4 Gigs left :( )

I would like to move my home directory to the new partition of expand it.

This is a snapshot of what I can see on my Gparted (note: the new partition is never used I just created it)

This is from Disk Utilities

It looks like you have installed Ubuntu under Windows instead of or as well as as a separate partition. This means that when you load Ubuntu (the windows Ubuntu) you only have a very limited amount of space, but your hard drive shows a massive Ubuntu partition with a ton of space which isn't being used. 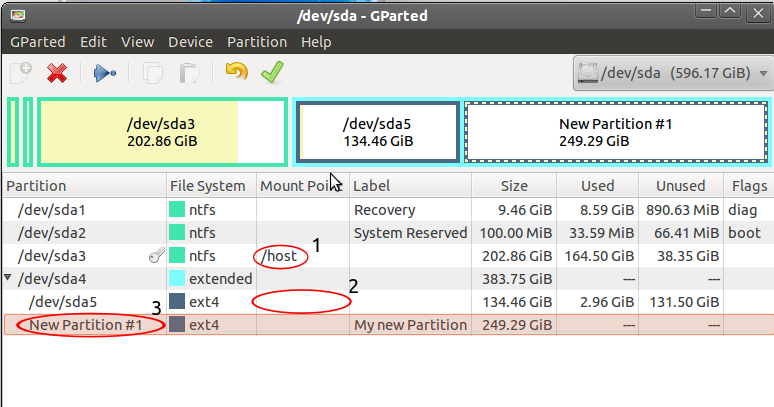 To solve this mess you need to back up all your files, delete the new partition and resize the Ubuntu partition back to 300GB. Then go into windows and uninstall Ubuntu from windows. Then see if it will boot into Ubuntu, if it will then job done. If it won't then you need a new install and you need to use the Ubuntu Live CD from boot (not from windows) in order to install it directly and not using a wubi install.

Comment here if you're having issues or need someone to talk you through it.

This is a pretty old question, but the solution is here for future googlers: https://help.ubuntu.com/community/ResizeandDuplicateWubiDisk

But the most efficient solution is to perform a Live CD install:

2
Is there any way I can increase my home folder size without uninstalling again?

1
Mounted NTFS filesystem takes up /home space.
0
expanding --vg-root(dm-0)
1
How to change directory for $HOME
2
How to Increase Home Folder Size in Ubuntu 14.04 LTS?
0
G-parted, Need help expanding my home partition
0
Can't Resize Ext4 Partition through Gparted on Ubuntu Live USB
1
I have a "home" partition, now how do I get my system to put my files there?