I am having trouble to access the filesystem on my phone (it's a samsung / google galaxy nexus). It just worked in previous version of Ubuntu, but now it appears empty whether it is mounted with MTP or PTP. I have followed a few guides on building and reinstalling libmtp etc without success. This answer did not help for me, either, and gMTP just hangs when I click the connect button. I know I can use wifi e.g. airdroid to access my photos, but this is too slow and a bit clumsy for me, and downloaded photos lose their original timestamps.

Has anyone had success connecting to this phone on 12.04 ??

A bit of elbow grease

Connect your Android phone to your computer. On your phone, open up the notification drawer, and click on USB Connection type. Make sure that MTP is selected. 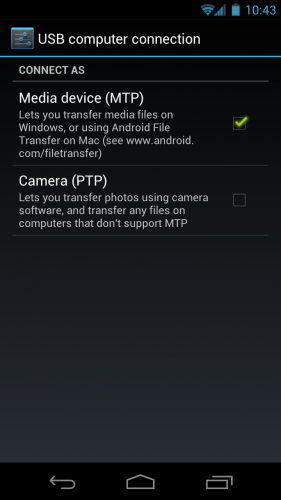 Now, run these commands on Ubuntu:

Note down the numbers written in front of idVendor and idProduct. You'll need those later on.

A Gedit window should open up. Type this text in it, all in a single line:

Save and close the file.

Disconnect your phone and run these commands:

In the Gedit window, remove the # at the beginning of the last line (the one that begins with #user_allow_other). Close and save the file.

Restart your computer, and then run these three commands:

Reconnect your phone, make sure it's still in MTP mode, and then run this command:

You may now browse your Android phone's contents using Nautilus. Just fire up the file manager, and then in the side bar click on your phone's name to browse your phone's filesystem just like you would with a USB stick. You can add, remove and modify files just like a normal file system. 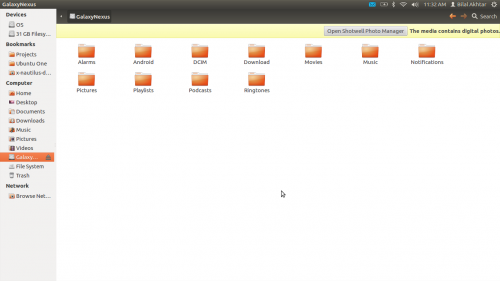 You might have noticed, however, that you cannot use the Nautilus eject icon to disconnect the phone. Instead, to safely remove the phone, you need to run the command:

From now on, you will need to run android-connect to mount your phone and then android-disconnect to safely remove your phone. Everything else should be handled automatically.

Note: These two commands won't require root permissions to run. All users who are members of the fuse user group should be able to run these commands without root access.

As I wrote in this thread, there are several solutions.

Given that you don't have a rooted phone, you can't install Samba Filesharing and have traditional samba shares on your phone.

But looking at this thread, it seems that ASTRO File Manager plus its SMB Module can work even without root access (not tested by me, can't confirm). AirDroid could be another alternative to test.

As an alternative way to transfer data between them, you could try to use Ubuntu One on both your PC and your mobile device (tablet or phone).

Not the answer you're looking for? Browse other questions tagged usb android media mtp ptp or ask your own question.

70
Getting MTP enabled devices to work with Ubuntu?
13
How to get a working mtp connection for Galaxy S2 in 12.04?
14
Best way to sync music to Galaxy Nexus (MTP)?
3
Disconnecting android phone
3
Browse Android's external SD card from Ubuntu PC
0
How to access an Androidphone's filesystem

70
Getting MTP enabled devices to work with Ubuntu?
13
Why am I getting these error messages when I try to view media files on my Android device?
11
MTP Connection: Unable to mount Samsung Android error many times in a minute!
14
"libmtp error: Could not get file from device." on attempting to transfer files from Android phone
5
Can't paste files onto Android phone
0
Connecting Samsung Android 8.0 phone to Kubuntu 14.04 via USB
1
Can't connect Pixel 4