How to get ScreenCloud to use PrtScn key

I recently downloaded the ScreenCloud app from the Ubuntu Software Center, and coming from Windows 7, it acts a lot like the "Lightshot" program.

Like the Lightshot program on Windows, I would like to be able to hit the PrtScn button on my keyboard in order to take a "Select Area" screenshot with ScreenCloud.

So, in order to do that, I went to ScreenCloud>Preferences>HotKeys>double clicked on "Capture Selection" and hit the PrtScn button, and it didn't work.

I made sure the Gnome-Screenshot was un-installed by going to the Terminal and typing:

so that shouldn't be interfering with it. I also tried other combinations and was fine. (Except the default "Shift>Alt>2". I was un-able to get it to go back to that.)

Assign Take a screenshot to some other key. 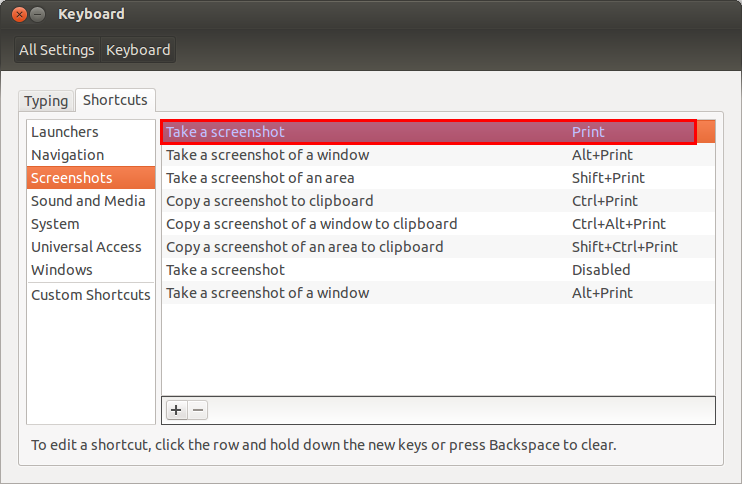 Then change the keyboard shortcuts for ScreenCloud, it will work (I tested it).

Not the answer you're looking for? Browse other questions tagged screenshot or ask your own question.

1
VirtualBox: how to capture screen shots of Ubuntu 11.10 guest on Windows hosts using Ubuntu Shutter utility?
6
How to uninstall the default screenshot app?
5
Taking screenshots of all (or specific) virtual desktops/workspaces (or: windows beyond/larger than current desktop)?
0
Application to turn screenshot (Ctrl+Shift+PrtScn) into file
4
Screenshot (CTRL + SHIFT + PrtScn) not in clipboard
16
How to get rid of grey area after gnome-screenshot being executed
0
Screenshot program/tool that captures a specific monitor?
2
How to screen capture browsers bookmark dropdown menu?