How to redirect single audio channels to different devices?

I just bought a bluetooth stereo speaker and I had an idea:

Is it possible to build a 4.0 audio system using my Bluetooth speakers as rear speaker and two normal cabled stereo speakers (or another pair of bluetooth speakers) as front? Which program I have to use?

In general: is it possible to split a 4.0 or 5.1 signal in the single channels and send them to multiple devices?

You can use a package called Jack. What it lets you do is pipe the outputs from the source, into whatever channels on whatever devices you want.

jack2d: is the more recent version of Jack

After installation use qjackctl to pull up the GUI.

Examples of things you can do with jack;

The possibilities are pretty endless. Here is a picture from the help page for Jack

On the left, you can see your output sources, and on the right are the devices you can output to.

Here is a picture of 3 LR audio sources where 2 of them are pipe to 1 speaker, 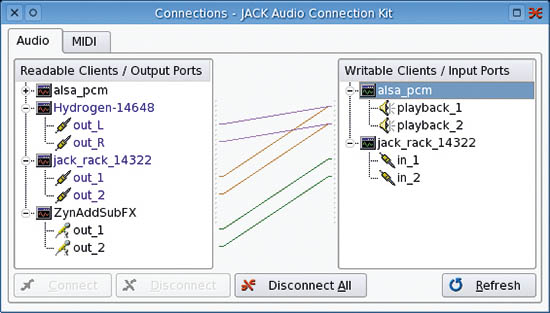 strictly speaking no. a single sound card processes the data synch's all the channels and makes front left x% stronger and rear right x% weaker so that the explosion on the front left of the screen sounds right. or the reverse when a jet flies over from the rear.

you can make a psudo setup but if you want good sound get a proper card and speakers. a well equiped and setup system can sound amaizing. I got an omega sound card for the wifes pc because she watches a lot of dvd's even on the cheezy speakers we have it sounds decent. when I got that omega I was quite suprised how much a difference a good sound card makes. I was used to the creative labs audigy.

I got it to work by combining the advice from this thread http://forums.gentoo.org/viewtopic-t-859769-start-0.html and this article. http://confignewton.com/?p=211

next, I added this to default.pa:

At the end of default.pa, I added a line similar to what is talked about in the gentoo thread:

EDIT: I've added "tsched=0" to the end of each of those static declarations. It really helps with both echoing and crackling.

To answer the original question, yes this can be done with PulseAudio, but you will not get perfect synchronisation between a Bluetooth speaker and a non-Bluetooth speaker, so you probably won't like the result if you wanted to use it for "normal" listening.

However, there are situations where perfect synchronisation is not necessary. In our case we were playing a dual-language video, with English on the left channel and another language on the right channel, and we wanted the right channel to be sent to a separate Bluetooth device while the left channel was sent to the default sound device (in our case HDMI audio from a Raspberry Pi 400). So long as the audio stayed within half a second or so, we didn't mind minor latency differences in this scenario.

and note the sink names (if your Bluetooth sink is not present, connect to it and repeat this command), then

changing the two sink names to the ones listed by the list-sinks command above, then

Now if you play a sound, you should find it plays on both devices, perhaps with a small delay between them (as I said the synchronisation might not be perfect). To be more selective about which channel goes to which device, run pavucontrol (if you don't have it then sudo apt install it), and in the "Output Devices" tab silence the channels you don't want on the underlying devices, for example silence the right-hand channel on the HDMI device and silence the left-hand channel on the Bluetooth device.

Not the answer you're looking for? Browse other questions tagged sound bluetooth pulseaudio redirect or ask your own question.

5
How to clone audio output?
5
How do I control Front and Back volume independently with cloned stereo signal
0
How to configure surround sound audio using three 3.5mm jacks as output?
3
5.1 HDMI Mixed Channels, Stuttering/Choppy Audio
4
5.1 audio via HDMI only plays on two channels
1
Ubuntu Studio Controls: How to add and map surround audio channels to a pulse output bridge?
0
Bluetooth devices instantly getting disconnected or not providing audio