As part of my job as a web developer, I spend an amount of time doing UI prototypes to show the client. It's a pain in the behind but sometimes it has to be done.

I've seen Shuttleworth (and the design team) pump out images like this: 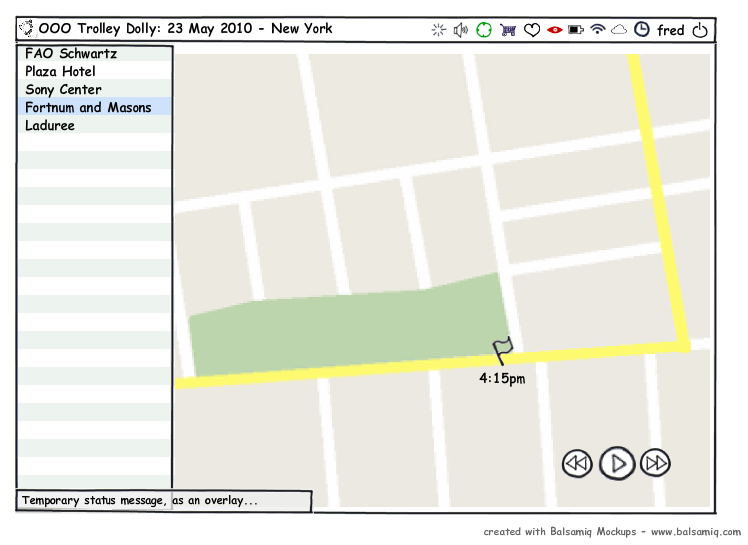 That's made by something called Balsamiq Mockups... Something that balances on top of Adobe Air (yack!) and costs $79.

I've tried it but it kept falling over. I think it had something to do with Air not the app itself. My point is if I'm paying out for something, I want it to be native.

For reasons I don't begin to understand, its authors have written it as a Firefox plugin, but Pencil is a great FOSS prototyping tool. Like Balsamiq Mockups, it comes with a massive number of prefabricated components that allow you to quickly throw together a demo screen. Also like Balsamiq, you can have multiple pages in a sketch, and link between them, allowing your programmers and designers to "click" certain buttons, and get a feel for what should happen when that occurs.

Unlike Balsamiq, its default mock widget set looks like real widgets, which I get concerned causes programmers to slavishly imitate the mockup they see on screen. Thankfully, a sketch widget template has been distributed with Pencil for awhile now. Also unlike Balsamiq—and hopefully not surprising for a Firefox add-on—Pencil exports its sketches to HTML, not Flash/Flex.

I know Pencil looks weird because it's a Firefox extension, but it actually works very well, and is easy-to-use. I am not ideologically attached to FOSS and don't mind spending $80 for great software, so I'll be honest and say that I use Balsamiq over Pencil. I find Balsamiq's general workflow and ease-of-use superior to Pencil. But Pencil's still a great tool. If you're looking for a FOSS prototyper, I think you'd have a hard time doing better. Launch Firefox and go check it out.

Personally I like doing web-ui prototyping in Inkscape (vector graphic drawing program), it is fairly simple to use and you can reuse most of the mockup when you are going to make the final product.

Try Glade Interface Designer, a GTK/Gnome interface designer, usually used for real applications, but could equally be used for prototypes.

I also recommend use of Inkscape for mockups. You can get a few stock widgets from www.openclipart.org (someone should upload more!).

Where I find it very handy is for marking up an existing UI... Take a screenshot of the app, insert into Inkscape and put it on a locked layer, then do your drawing on a layer on top of that to show whatever changes you need to show.

I've used Mockingbird before for a very small project. http://gomockingbird.com It's a web-based client that allows collaboration. It apparently is going to leave beta and stop being free in a few days though.

Not the answer you're looking for? Browse other questions tagged software-recommendation programming alternative design or ask your own question.