Can I change Synapse shortcut to Super/Windows key alone?

When I try to edit the synapse config it does not allow me to use the left Super as a shortcut to invoke it. Is there a round-about way that I can go through. 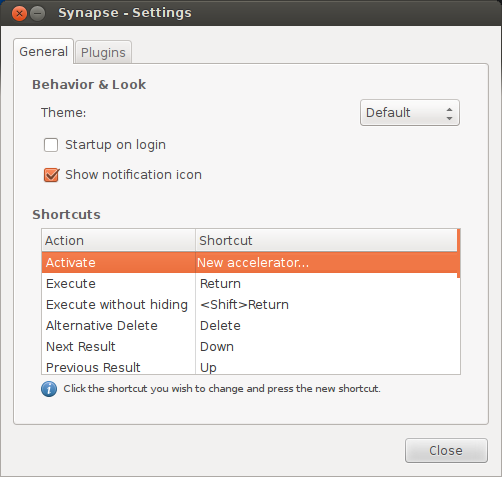 When I just press the Windows/Super key the configuration window does not acknowledge it. However, a combination shortcut (such as Super+A) does work fine.

Since I'm using Precise, with Unity, I'd also need a way to change the default dash behaviour for Windows/Super key to something else.

I know this is a little old now but thought solution by be useful anyway.

First remove any super key bindings e.g. <super>+p is a common one for screen settings

In later versions of synapse installed from the launchpad ppa the setting is in .config/synapse/config.json. Edit it while synapse is closed to specify Super_L as activation key.

See better answer below this one.

You must bind the action to the Super's scancode or keycode; normal hotkeys record the state of the modifier keys and throw away their keypress events; so you never see something that reacts to just pressing Alt, but instead to the A key plus the Alt key's recorded state.

The hotkey library in use is libgtkhotkey (0.2 on 12.04) and it doesn't support using the key press event from modifier's. You'd have to write your own patch to catch that and perhaps support such a thing in the signature format.

All tests with the existing signature format failed to produce anything but an error.

A temporary workaround is to remove the modifier from super and remap the key to a "normal key" you do not use. I choose "µ", which is named "mu".

The first command will pretty much make super useless for anything else than typing "µ" and the second command will clear all Mod4 modifiers (I do not use them anyway). Use xev to find the name of a key, look for a line similar to:

The changes will be lost after logging out. To make them permanent, add the commands to your .bashrc OR create a file named .Xmodmap in your home directory with the content:

If you mess up while playing around with xmodmap, just log out and log back in again to restore your old settings.

I've only tested with this one key, and I can still type µ by pressing Alt Gr + M without having Synapse pop up. I also tried remapping Super to Page Up; Synapse was able to detect the key while entering it in the settings, but failed to open the launcher when pressing it.

I just installed synapse on XUBUNTU 12.04.02 and changing the Signature entry in

was enough to have synapse pop up with a single hit on the Super-key.

add synapse then set its shortcut as super key.

Not the answer you're looking for? Browse other questions tagged shortcut-keys synapse or ask your own question.

4
Indicator Synapse keyboard shortcut
4
Is there a way to search for files with the whisker menu?
4
Binding Synapse shortcut to key-release instead of key-press
1
lxqt "whisker menu"?
2
How to activate/deactivate synapse with super key shortcut in Ubuntu 16.04?
2
Re-map 'Super' key to launch an app

10
Prevent launcher from showing when Super key is merely held down or when it's combined with another key
3
Way to disable windows from resizing while dragging but allow keyboard shortcut resizing?
7
How can I assign the key Super+M» to minimize all windows in Ubuntu 12.04?
4
Binding Synapse shortcut to key-release instead of key-press
10
How to change shortcut for Activities overview?
3
My super key is disabled. How to enable it?
2
Ubuntu thinks Windows key is right super