Install a 'recommended' package when user asks for corresponding action

Let's say that I am building an application to a DEB package, which has as recommended dependency a package, let's call it package1.

What is the best way to tell him that an extra package has to be installed in order for this functionality to work? What program can I use so as to install this package directly from my program with a dialog indicating how the installation process is going?

I want to do this via the default way, and, preferably a way that is Linux Desktop Environment independent.

In short, I want a way to install a package from my program neither by opening Ubuntu Software Center (via an apt:// URL) nor by doing it at the background.

Ideally, it would be a dialog like the one that is used by the Update Manager (or, for the ones that remember, from the Synaptic Package Manager).

PS: I would prefer something that could be implemented using C++ !

If you're using python, python-aptdaemon-gtk is probably the way to go. For a good example of how to do this, look at /usr/share/doc/python-aptdaemon.gtk3widgets/examples/gtk3-demo.py.gz 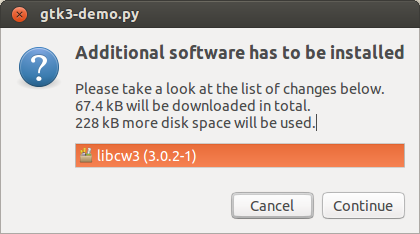 In the case of using C++, you could could use the AptDaemon D-Bus interface, but I don't know of any examples and you wouldn't get the widgets for free.

I can't find much in the way of C++ DBus tutorials on the web, so your best bet is probably the documentation and examples in the libdbus-c++-doc

You might take example on the totem media player when it prompts the user to install missing codecs, or when you open share options of a directory in nautilus via right click, it prompts to install samba.

You could also use the command xdg-open apt://package: it will open the default package manager with the possibility to install your package (ubuntu software center in recent releases).

This is an old question but I've found the answer, which is apturl.

It works as follows:

apturl apt:packagename and it is exactly what I need and what nautilus uses!

Importantly, it is available pre-installed on many linux distros :)

Not the answer you're looking for? Browse other questions tagged application-development or ask your own question.

9
How to install a package from within my application?

22
How does Application Review Board work?
2
Central data storage for apps in Software Center
6
How to package an application that contains a binary that needs to be in $PATH?
5
KEY.is_pressed() in gi.repository.Gdk?
1
Why is quickly ignoring the setup.py file in my project directory?
3
unity components debugging
2
To make or not to make…python-nautilus a dependency?
2
Packaging commercial application
1
Quickly produces an error when installing